I am Supermariofan67, a User of the Super Mario Wiki. I have a Wii U and Switch with the games listed at the bottom of this page. I am a fan of the Super Mario series and Mario Kart series. You will most likely find me doing various file and page maintenance, adding/replacing images, and sometimes rewriting/expanding articles. I often make shell scripts or use command line utilities to automate some of this work, such as optimizing or cropping images, or sorting stuff. I share some of these tips below for anyone who is interested. If you also do this type of work, I encourage you to become familiar with some basic regular expressions and how to use them with your favorite text editor, such as Notepad++, Visual Studio Code, Vim, or even the wiki's built-in editor. I also recommend learning the basics of your operating system's shell scripting language, as well as some utilities like ImageMagick, ffmpeg, and GIMP.

I also edit on WiiBrew Wiki (so far just to clean up after a vandal) and ArchWiki, though I'm not nearly as active on those wikis as I am here.

Gallery of my favorite images from the wiki

Getting Screenshots from Wii U

In the past, it was possible to get screenshots from Wii U games by accessing the Wii U's internet browser during gameplay and uploading images to Dropbox or a site like Imgur or Postimg. However, these sites now use newer web standards that are not supported by the Wii U's browser, so they no longer work on the Wii U. However, after reading through Reddit posts about it I found a way to get screenshots to your computer using this HTTP file server software. You must run the program, set a target directory for files as described in its instructions, find your computer's internal IP on your network, and access that IP from your Wii U browser, where you can upload the images straight to your computer. It uses older web standards (for now at least) that are supported by the Wii U, and it can run on Wine on Linux/MacOS.

In addition, it is still possible to upload straight to MarioWiki from the Wii U if no cropping is required on the computer.

Some common confusion about SMG/2 images


I usually replace an SMG/2 image if:

I have made a simple Java program/script to automatically sort galleries alphabetically. It is now on GitHub if anyone is interested. However, please note that I have not extensively tested it, and if you use it, you should double-check the result to make sure nothing was removed/broken in the gallery. Please tell me about any bugs. 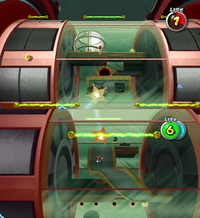 A script to automatically optimize all PNGs in a folder

This should be equivalent to running PNG Monstrous with the pngout and zopflipng options enabled, but will also preserve the iCCP chunk to hopefully prevent color changes to images with gamma adjustment. Additionally, it will convert BMPs to PNGs and uncapitalize file extensions. This script requires zopflipng, pngout, and GNU Parallel. It will run pngout and zopflipng on all pngs, PNGs, bmps, and BMPs in the current directory and output the compressed images to the ./optimized directory with a lowercase .png filename. Zopfli uses the -m ("compress more: use more iterations") and --lossy_transparent ("remove colors behind alpha channel 0. No visual difference, removes hidden information.") options. It will compress multiple images in parallel, up to the number of CPU cores in your computer. This script is intended for Unix-like operating systems, such as Linux and MacOS. You will need to install Zopflipng and GNU Parallel with your package manager (for MacOS, use the Brew package manager). I'm not sure about Windows, but you can probably use this in the Windows Subsystem for Linux, or maybe find a way to port this to a native PowerShell script. You will probably need to download pngout manually and place it in in a directory in your PATH, such as ~/bin, as it is not available in most package repositories (though it is in the AUR). With the required programs installed, just put this code in a text file saved in ~/bin or in the folder where your PNGs are, chmod +x it, and it should work. If not, you can just manually run the two commands while in the folder with the PNGs. It's less convenient, but it would do the same thing.

This will crop all JPGs or PNGs in a folder to their content and optimize any PNGs, placing them in the trimmed directory. If you have BMPs, convert them to PNG first with parallel mogrify -format png ::: $(find . -maxdepth 1 -type f -name "*.bmp" -o -name "*.BMP")

Big projects I have completed