I don't see why this one of all of the MP artwork (which also don't have summaries) wouldn't be official. It's the same artwork used on the cover, and L151's uploads have usually been from official sources. It's only on userpages because you broke the file links on the galleries.

Hey, when you have time, can you please check your email? We have a quick question about your recent 'Shroom application. --

Thanks for letting me know, we'll get back to you later this week once the decision is finalized. --

I think it's fine to mention the datamine as a brief trivia point as long as we don't outright state these courses are coming, though the number of possible courses listed as examples should be kept to a minimum (i.e. a few of the most obvious ones; for instance, you can see a SNES Mario Circuit course and T variants of courses) to avoid over-speculative "I think this course is definitely (name) because you can barely see this special landmark" edits from users, to be cautious.

Hello WildWario! I'm Zange, the director of Pipe Plaza and I would like to extend a personal welcome to The 'Shroom to you, as well as explain a few things now that you're one of our writers. (also please forgive me as I meant to send this much sooner but I was very busy this last week!!)

I would like to explain our reminder process, primarily. Usually, I'll send out reminders for articles two weeks before an issue is set to come out (but sometimes it's a day or two late if I get busy!), and I usually set the deadline for the Wednesday before the issue comes out. Of course, if something comes up and you need to send an article late for whatever reason, please just let me know because we are very flexible about this sort of thing! Life happens, after all.

I would also like to ask how you would like to receive these reminders. Wiki talk page? Email? Some other channel that works better? Just let me know ^^ Zange 00:20, March 22, 2022 (EDT)

Hi I got a quick question, so if you have any ides that is for any game like Mario Kart Tour, all of these needs to be in our User Page?

Yes, I've deleted the page and moved the Comet bike to that title.

What is that pink block called?[edit]

Could it be the Boost Block?

I think I know what the IP editor is referring to. It's those pink blocks with magenta rims that only appear as starting platforms in certain challenges where the player must not touch the ground. It's not given any names in the game's Prima guide, so we'll have to ask another user for a filename, or a name from a Japanese-language source.

Thanks for helping with the answering! I forgot about those blocks, but do they appear in SMM2? I don't have that game and I've never seen any SMM2 Youtube videos with these blocks yet.

They are in SMM2. Their internal name is startblock (i.e. M1_Object_startblock.Nin_NX_NVN). In NSMBU and NSLU, they're called block_odai.szs. So I'd go with "Start Block" as an article title. Scrooge200 (talk)

Thanks for the help!

Thanks for that. Now I think I have a handle on what you're saying. It seems like most of the kart variants are still the same size as their bases or each other, but I could see that the Silver Bullet Blaster is in a different size group than the Bullet Blaster and the Bull's-Eye Banzai or the Pumpkin Kart to the Apple Kart. If I may, that's what you're getting at, yes?

Yes. Also, Pumpkin Kart seems to be the only variant that's in a different size level, so I'm starting to think is it really even a variant?

Honestly, a good question. The Pumpkin Kart, while similar in shape, seems to feel more different compared to the Apple Kart, kinda like the Dozer Dasher to the Dragonfly comparison. I feel it could be considered it's own kart, which could be backed up further by it having a variant of its own (the Gold Pumpkin Kart).
In any case, I appreciate you showing me that. Gives me a much better understanding of what you meant.

Cowboy Wario has wandered in your talk page![edit] He found out a new equation after drinking the world's toughest beverage, milk! Observe:

Somebody ought to reward him a generous research grant so we can have some big breakthroughs for Mushroom Kingdom science and history! 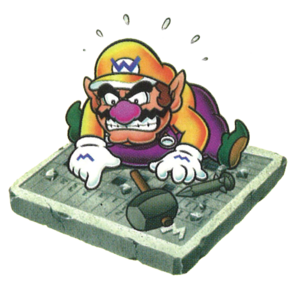 This may help. It's the number of claps you give to other players by mashing the A button at the end of an online game.

Should the trivia really include the fact that a tour is the first to include all four variants of a certain course?[edit]

Hi WildWario. As you told me, I am discussing this on the talk page. User:MarioJC sent me a warning saying I might be suspended from the Wiki if I don't discuss my edits before forcing them back on, so that's what I'm doing. If you remember, my edits that you don't think are noteworthy is a tour being the first to include all four variants of a certain course. I think they're noteworthy for two reasons. Number one I've already said, and that's that most tours don't include all four variants of a non-signature course. The other reason I have is that most of the time, when a tour debuts a new R/T track, it usually only includes that track's R/T, not the original, T or R variant. Exceptions to this rule include Marry Mountain R/T from the 2021 Winter tour, Rosalina's Ice World R/T from the Space tour, Ninja Hideaway R/T from the Mario vs Peach tour and Maple Treeway R/T from the Fall tour, to name a few. Since we usually don't see all four variants of a course when its R/T variant is debuted, it should be noted when a tour does feature all four variants of that course. Now you can tell me a few reasons why you don't think it's noteworthy to write such trivia.AlexD830 (talk) 21:10, May 27, 2022 (EDT)

There were previously mentions of these appearances in the trivia, but they were removed for several reasons, one of the main ones being that this occurred too many times and is no longer noteworthy. For example, it was special when a tour featured no new gliders, but soon it becomes more and more common and repetitive to the point where it is no longer special anymore. Usually, only the first two or three appearances are noted in pages. Of course, this is just my opinion, so you can still disagree.

If I remember correctly, it's already been noted, but I forgot which tour was the first to feature all four variants of a course.

Just checking in to see how you're doing there. I'm more focused on completing talk page proposals, but I also have my sights set on Fire Mario's page, so in a way we have two pretty similar goals!

It's been on hiatus since the feature nomination until next week, where I'll try to work on it more since I'll be more free (next week's the after exam school holidays), though completing the Data House page is currently my main priority.

I am contacting you because two of your sections, Musical Quiz and New Articles have been selected by the Awards Committee as nominees for C8. Best 'Shroom Section Design in the Community Awards XV. This award aims to acknowledge the writers who put care into making their 'Shroom sections visually appealing and well-crafted, whether through imagery, design, or wiki coding. To provide voters of the Community Awards Dossier with a quick reference guide to nominees and their track records, I am reaching you out to ask you for samples of both of your sections which exemplify the quality of your own work.

Please, if you would, send me up to three samples for each of your sections which you would like featured in the Community Awards Dossier. Send these to me through whatever medium works best for you no later than 2:00 PM (14:00) EDT on Friday, June 10th.

I recommend that you pick three samples which you feel best display the qualities of your section relevant to this award.

Please note that if I do not receive three submissions from you by the deadline, I will select samples of your own work for your entry on the dossier at my discretion, to bring the total up to three for each. If you would prefer I make all or some of the selections for you, please let me know, and I will work something out.

If you are unfamiliar with the Community Awards Dossier, please refer to last year's edition. If you have questions or concerns, please let me know and I will get back to you as soon as possible.

Those ramps are pretty much standalone, if frugal-looking (in in-universe terms), unlike girders which form the framework of some structure. If they are officially referred to or described anywhere as “girders”, even internally, then I’d say a mention on the Girder page is in order, yes. -- KOOPA CON CARNE 15:19, June 18, 2022 (EDT)

Go ahead, I was just getting rid of the dead links.

Regarding the Boss Galaga’s first appearance[edit]

According to SmashWiki, it did debut in Galaxian. Sure they appeared under a different name but it seems that they’re the same entities as the ones in Galaga. Just like how Mario in Donkey Kong is still Mario despite being called Jumpman in that game.

As a side note, since it is Awards season, if you need to be late or miss specifically because of that, that is TOTALLY FINE!

Hi, I'm back again to give you something that might be handy for the song credits for Mario-related music.

Developers should have been used the Tokyo Blur as the coin rush for Tokyo Tour, not SNES Rainbow Road, and this is happening today in the 3rd anniversary, it is a bittersweet gift.Pierce Ng (talk) 02:47, September 21, 2022 (EDT)

Name of the road elements in Mario Kart Tour[edit]

I replied in my discussion page about the name of the road elements used to build the various structures in R, T and R/T variants of courses in Mario Kart Tour, they're known as roadkanaami, which means chain-link/wire mesh road.--Mister Wu (talk) 19:02, September 27, 2022 (EDT)

I do want to apologize for falling off the train with reminders the last few months! Things got a bit hectic on my end and it slipped my mind, so that's on me.