I'm not completely sure (I haven't played in a while), but don't Spike Tops appear in Super Mario World and New Super Mario Bros.. -- Sir Grodus

Spike Tops first appeared in Super Mario World. And I'm pretty sure they appear in New Super Mario Bros., but someone else should confirm that. -- Son of Suns
Yes, in many of the middle-world cave levels and later-world castles they cling to the surface, upside, side or downside. Wayoshi ( T·C·@ ) 16:42, 13 September 2006 (EDT)

I've played both games and they exist in both, but are far more annoying in Super Mario World because you can't kill 'em while they're on a block of some sort.
The preceding unsigned comment was added by Big-bang (talk).

While the infoboxes in the Stats section usually look fine, the Super Paper Mario one extends towards the right past the article's border when there's a banner being displayed on the right side (for me, at least; I'm using Firefox and a 1024x768 resolution); besides looking strange, this results in much of it being covered by the banner, making it unreadable. I don't really know how to fix this without moving the infobox to the next row (which makes the formatting of that section look even worse than it already does), but if someone can think of a better solution, it'd be nice if that could be repaired. Any other article that has three infoboxes next to each other with similar formatting most likely suffers from this as well.--vellidragon 15:37, 5 December 2010 (UTC)

I think we should merge R.S.Buzzy because they are red and most Spike Tops are red. Besides theta article is a little short. We just merge the two articles. --


I'm gonna try this again the reason i feel that these two should be merged together is because there is very little difference between the regular Spike Tops and the Red Spike Buzzy both are red both have spikes on their heads and to top that off the Spike Tops in Paper Mario: The Thousand Year Door. I would also like to point out that we have had mergers like this before such as Goby Shy Away etc. I think that there just isn't enough of a physical difference between the two to justify having two separate articles.

(Every other game except SPM, you mean). Anyway, I suppose this was done to make them stand out from normal Spike Tops, like how the KP Koopas are different from normal Koopas (aisde from the colour, they're the same too, or at least the KP Paratroopas are: the land-based Koopas apparently differ in using Shell Shot/Shell Toss). In both cases, I guess Nintendo didn't feel like making the Glitz Pit difference more than cosmetic, which is annoying, but Nintendo's like that sometimes, and without any official names being the same, there's not really anything we can do about that this time. - Walkazo 19:01, 15 April 2011 (EDT)

Indeed it is: Togemetto for Spike Tops, Aka Togemetto for Red Spike Tops. 'Tis exactly the same naming convention as in English (and French and German, too). - Walkazo 20:13, 15 April 2011 (EDT)

I have already obtained the Mario Enclycopedia and I can't do a good scan of the Spike Top. Thus, that's why the current artwork has to be improved. Sledge Bro, Goomba, and Kamek got their artworks improved, and you left that Bowser Minion in the dust. So, you only have until Dec. 27 and January 11th to improve the Spike Top artwork, or I can't get any more Bowser Minions artwork or models. Think on it, please.--Hamshamcart (talk) 16:40, 25 October 2018 (EDT) 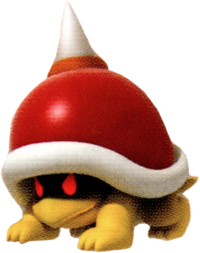 canceled by proposer
If we're splitting "Note Block but it makes different sounds" and "Koopa Clown Car but it spits fireballs", then I believe the teal-bodied, blue-shelled, faster Spike Tops also from Super Mario Maker are no exception.

What does this blue variant look like? Because if it's just buzzy beetle with a spike, then I wouldn't be as supportive because that leaves out the Paper Mario stuff. And whaddwe do with Red Spike Top?

Here you go. Also, unlike this case, Red Spike Top should probably be merged with Spike Top, as it shares nearly every stat with regular Spike Tops in the game it appears in except for its Tattle. (But that's for another proposal.)

It's a color variation. Per how we didn't split the red and green Koopas. Red Spike Top should stay on its own article IMO. --

You're not making an ounce of sense. These shouldn't be split because they're "a color variation," but Red Spike Tops, which are also a color variation and have zero differences from the other Spike Tops in TTYD outside of that, do deserve their own article? How can you possibly justify that?

I meant that the previous proposal failed, so i'm kinda confused for the PM one since i'm kinda not hyped if fails a second time... --

So? That proposal is almost eight years old; there's nothing stopping a brand new proposal's outcome from overriding it. Around that same time, there were proposals to split levels from their worlds that failed. Today, such a thing would be preposterous.

@SmokedChilli, i think that "fast" is an identifier. --

What he's asking is if it's called that in-game or anything like that. It's not in-game; it's simply Spike Top, as said by the wavery robotic voice. Doc von Schmeltwick (talk) 03:28, 4 March 2019 (EST)

I mean that there cannot be two articles with the same name without an identifier. Also, this is not an item, this is simply a color behavioral variation of an enemy. --

@LinkTheLefty: Okay, yeah, I didn't take that into consideration. I guess I'll cancel this proposal then.

don't merge 4-7
This should've been done a long time ago. A Red Spike Top is the exact same thing as a regular Spike Top, just a different color than the other Spike Tops in TTYD. It has the same stats and everything. These aren't like White Clubbas, which have higher stats, a resistance to ice, a weakness to fire, and an extra attack that normal Clubbas don't have, it's just a Spike Top that's red. Which is the default color for Spike Tops in every other game aside from SPM, including the other Paper Mario games. Since color variations generally don't get their own articles and especially after that proposal to merge the Yoshi colors, there really is no excuse for this anymore.

@Niiue: So? Differently colored Shy Guys appear in Paper Mario: Color Splash and are labeled as such in-game. Doesn't make them split-worthy. Your point about Red Spike Tops not dropping Slow Shrooms has no relevance whatsoever, since RSTs only appear as opponents in the Glitz Pit. The nature of Glitz Pit fights means that no item drops occur, so even if they were programmed to be capable of dropping items, there would be no way to see it happen.

Besides, it looks like TTYD is the only game with this disrespancy to begin with, as even the 64 Paper Mario had default Spike Tops as red. I think the only argument to keep merged is different tattle logs, different enemy entry in TTYD, item drops (yes, I read your comment but that's actually a point in favor keeping it split, since in tandem with that, they have different locations where you fight them), and a different name. As the Shy Guy situation is brought up, not sure to keep the Spike Tops split further.

@SmokedChili Spike tops and Parabuzzies look basically like their prior artwork, and KP Koopas have some minor plot importance. Alternatively, all of their plot importance can go onto KP Pete's page. Doc von Schmeltwick (talk) 12:48, March 26, 2019 (EDT)

I don't think Shy Guys should be split though. --

One or the other. It is the exact same situation. Except these are less different. The only difference here period is the tattle (which is wrong in some versions) and a single texture. Having this be in the "profiles" section along with the other, and the ones in other PM games that look like this, would be better for organization. Doc von Schmeltwick (talk) 13:03, March 26, 2019 (EDT)

Location is also pretty important for distinguishing characteristics, though. I mean, your point would be stronger if they were fought in the same area of the game.

Alternatively, it can be compared to the dark Little Mousers in one secret level of SMW2, where the color and locations were the only differences. To say nothing of the brown, blue, and gray enemy palettes in SMB, which in fact are in a different encoded location than the foreground palette (hence why underwater bloopers aren't green). Doc von Schmeltwick (talk) 22:56, March 26, 2019 (EDT)

Well my point is, it's not the individual traits alone that make them distinct. It's a culmination of them that causes them to be distinct. Red Spike Tops already have two points in their favor, being fought in an entirely separate location than blue Spike Tops, and the aforementioned tattles. I do see where you're coming from though, hence why I didn't take a side here yet. Just playing advocate here.

That doesn't take away from the fact that Buzzy Beetle derivatives in TTYD are treated the same way as the Goomba ones: stick wings or spikes (or both) on them and call it a day instead of using what "looks basically like their prior artwork". Is it a gameplay reason or something else, we may never know. And KP Koopa page already has the basic necessary info without the plot stuff, which seems important because... why? SmokedChili (talk) 13:07, March 27, 2019 (EDT)

These are different from other derivatives in that they are functionally the same thing. As for the "location" thing, many enemies in the Glitz Pit are in other portions of the game; this basically functioned as the trash dump for enemies they couldn't otherwise fit into a game location (like Pokeys) but still wanted to implement. Additionally, it's worth noting that in a prototype, it seems the KPs were regular red-shelled Troopas, if the trivia point on KP Pete's page is anything to go by. They probably just wanted them to look more distinct in the final so their asset reuse wasn't so conspicuous. Doc von Schmeltwick (talk) 16:17, March 27, 2019 (EDT)

Regardless, that doesn't cover the other points. These are functionally less different than red and green Troopas in your average platformer, with the name difference being a color identifier. KPs can be compared to the situation regarding "Spookums" in the English SMRPG. Doc von Schmeltwick (talk) 00:23, March 28, 2019 (EDT)

Here's one thing I'd like to know: How can Red Spike Tops even be called "distinct RPG enemies" when 1) they're not distinct and 2) they aren't even new? KP Koopas, while not the first yellow-shelled Koopa Troopas, are at least something that TTYD actually came up with, and they have a name that doesn't pertain to their color in both English and Japanese. Red Spike Tops, on the other hand, are just that. They are not the "RPG-original derivative" as SmokedChili is erroneously claiming it is, since they are not original in the slightest. Red Spike Tops have been around since Spike Tops have been around, which is 14 years prior to the release of TTYD. There was just no reason to call them that because that was their normal color. And it still is.

Expect red is not Spike Tops' normal color in TTYD, it's blue as with Buzzy Beetles. If it was, Red Spike Tops wouldn't be clarified as red. With how TTYD did it, Red Spike Tops are separate from the normal Spike Tops, which are blue in this game but red almost everywhere else. Which is why I call it bizarre. SmokedChili (talk) 13:38, March 31, 2019 (EDT)