Greetings. The name's Walkazo (big surprise there). I'm a Bureaucrat here on the Super Mario Wiki, so feel free to ask me anything (within reason) and I'll do my best to help you out. I joined the wiki in 2007 along with my brother, who shared my account for a few months before I kicked him out. His name's Pantaro, but he left the wiki years ago, so don't bother trying to call him up.

Now about me... Well, I'm a 24-year-old girl from Toronto, Canada, and I'm currently studying at university to be an ornithologist - although I'm interested in many other branches of zoological science as well, like genetics and evolution. I also love Mario stuff (obviously), although I sympathize with Bowser much more than the titular plumber himself, and split my computer time between editing the wiki and writing Koopa-centric fanfiction. Around the wiki, I try my best to keep track of Proposals and other such policy debates, and while most of my edits are maintenance work, if I come across poorly written articles on my rounds, I usually sit down and try to fix it. One pet-project I have on the go is to mash as many of the games as I can into one comprehensive timeline that goes along with my fanfiction. I already made a (partial) world map, although I had to tweak or completely ignore quite a few in-game maps to make it work. Another thing I'm working on is an evolutionary chart for all the Koopas, including Bowser's species (which I call Dragon-Koopas, seeing as an official name hasn't actually been made yet).

Between my editing, writing, work and my education, I don't have as much time as I'd like to play the actual video games themselves, but I manage to squeeze a few in here and there, and I'm always on the lookout for new titles to add to my collection. My favourite games are Super Mario World, Super Mario Bros. Deluxe, Super Paper Mario and Mario Kart: Double Dash!!

A blockquote is a block of quotes. 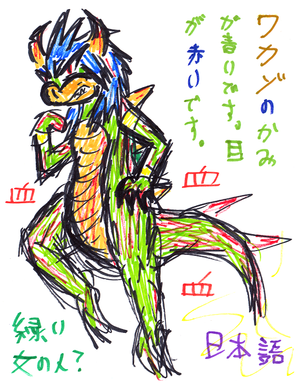 As well as my aforementioned fanfiction, I've also done some writing for The 'Shroom over the years. So far, I've written four special sections discussing the science of the Koopas (listed below), and hope to do a couple more someday. I also have an ongoing "Mario's Boombox" column, wherein I recommend videogame-inspired/derived music, and am doing a one-year run of a comic called The Adventures of Little Mario, about Mario and his friends running amok as kiddies. I've also done a few awards presentations and co-authored the comic "I heard you have a dragon problem?" - my one and only foray into user fiction.

Some stuff that I found funny at the time. YMMV.