From the Super Mario Wiki, the Mario encyclopedia
(Redirected from Aether)
Jump to navigationJump to search

“I fight for my friends.”
—Ike, Super Smash Bros. Brawl

Ike is the protagonist in two games of the Fire Emblem series, debuting in Fire Emblem: Path of Radiance, the series' ninth installment. In his home series, Ike is the leader of the Greil Mercenaries, who are drawn into two wars spanning the continent of Tellius. With the help of his companions, Ike acquires the sacred sword Ragnell and brings peace to Tellius, ending hostilities between its inhabitant beorc and laguz races in the process.

Ike appears as a playable character in Super Smash Bros. Brawl, using his appearance in Fire Emblem: Path of Radiance. He fights using the two-handed longsword Ragnell, which gives his attacks power and range, but as a result he is slower and heavier than most characters. Ike was not originally intended to be in the game from the start; instead, Masahiro Sakurai had created a template for a slow but powerful swordsman. As he also wanted to include a new Fire Emblem character, it was decided that Ike, in addition to being the protagonist of the latest games in the Fire Emblem series at the time, would be a good fit for the concept. Ike is voiced by Jason Adkins in English, and by Michihiko Hagi in Japanese, his respective voice actors since the release of Fire Emblem: Path of Radiance. This also makes him the first Fire Emblem character in the series to be given an English voice actor.

Ike in the Subspace Emissary

The three continue to dash onwards through The Wilds, after seeing Galleom in its tank form. Galleom transforms into its main form after meeting the swordsmen. Ike, Marth, and Meta Knight face off against Galleom afterwords, and then continue into The Canyon. After Meta Knight had left the group after Galleom was defeated a second time, Ike, alongside Pokémon Trainer, Lucas, and Marth, are seen fighting many Primids, now with the Ice Climbers. The five "warriors" are then seen (Mario, Pit, Kirby, Link, and Yoshi) in the background, jumping off from a bluff to help fight off the army. After awhile, Ike, alongside many others, are flown into Subspace, where he and all others are turned into trophies. However, King Dedede, Ness, and Luigi recover him, and others (Kirby also helps afterwards). He and the others are then pitted against The Great Maze, and then the creature whom turned the heroes into trophies, Tabuu. 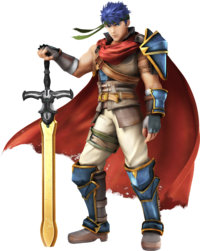 Ike returns as a veteran fighter in Super Smash Bros. for Nintendo 3DS and Super Smash Bros. for Wii U. His design has been changed to be his appearance as a Hero in Fire Emblem: Radiant Dawn. While Ike's moveset is no different from the previous game, most of his attacks that use fire use blue flames rather than the red seen in Super Smash Bros. Brawl, referencing his blessing by the goddess Yune at the end of Fire Emblem: Radiant Dawn, during which his sword is cloaked in blue fire. Ike receives faster movement and attack speed, in exchange for his overall damage output being slightly toned down. 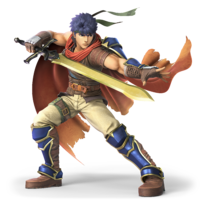 Ike reappears in Super Smash Bros. Ultimate as a playable character, where this time, players can choose to play as his Fire Emblem: Path of Radiance or Fire Emblem: Radiant Dawn appearance. His voice also changes slightly depending on which appearance is used, which is provided by his voice actor from Fire Emblem Heroes, Greg Chun, replacing Jason Adkins from previous Super Smash Bros. installments. Ike benefits greatly from universal changes: his mobility is even faster, his short hop timing is greatly reduced, his aerials have less landing lag, his recovery is extended by the reintroduction of directional air dodges, and his offensive play is aided by the abilities to use any ground attack out of a run and use his aerials on ladders.

On a side note, as with several other returning fighters, Ike's (as well as Marth and Roy's) victory theme has been sped up compared to the previous installments.

Ike's Classic Mode route involves fighting characters in dark-colored alternate costumes (except if they are dark-colored by default). This represents his relationship with the Black Knight in his own games. 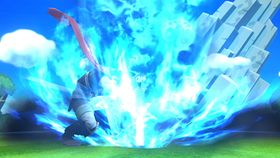 Eruption in Super Smash Bros. for Wii U

While the attack can be powerful when it is being charged, a full power Eruption actually delivers less knockback than some of the weaker stages of the charging process. In fact, the stage that comes before Eruption reaches full power can potentially one-hit-KO most fighters. On a side note, the full power Eruption delivers horizontal knockback, while all the other charging stages deliver vertical knockback. Additionally, Ike begins flashing red when Eruption is almost at full power.

In Super Smash Bros. for Nintendo 3DS / Wii U, Eruption has two custom variants: the first is Tempest, which cannot be charged as long and replaces the fire with wind that pushes opponents away; only the sword can deal damage, and a fully-charged Tempest does not damage Ike. When used in the air, the move does stall Ike's falling speed for a moment, which can help with his recovery. The second variant, Furious Eruption, creates larger explosions that deal more damage to both opponents and Ike; the move can also damage Ike before it's fully charged. 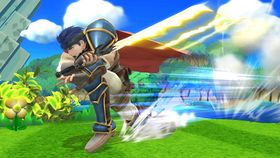 Quick Draw in Super Smash Bros. for Wii U

Quick Draw is Ike's side special move. Ike dashes forward a distance depending on how long the move is charged and slashes his sword, damaging any opponents in his path. Although the move can only be charged a certain amount, Ike can be kept in place as long as the special move button is held down. The dash also stops when Ike reaches an edge or strikes an opponent. When used in midair, Ike is left helpless afterwards, though in Super Smash Bros. for Nintendo 3DS / Wii U, there is a brief window in which Ike can act before being helpless.

The first custom variant given to Quick Draw in Super Smash Bros. for Nintendo 3DS / Wii U is Close Combat, which dashes faster and passes through opponents to strike them directly up for less damage. The second is Unyielding Blade, which gives Ike super armor throughout the attack, preventing him from being stopped, as well as dealing greater damage, but Ike does not travel as far, or as quickly. 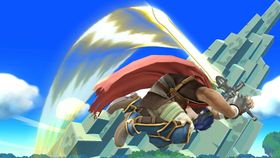 Aether in Super Smash Bros. for Wii U

Aether is Ike's up special move, based upon the skill obtainable in the Fire Emblem series. When used, Ike throws his sword up into the air, damaging any nearby enemies, and knocking them into the air, then jumps up, flips, and slams back toward the ground. Ike also gains super armor while throwing his sword, but it only lasts until he jumps, and can be interrupted if Ike gets grabbed. The move offers very little horizontal distance, which can be a hindrance to Ike if he's not below a ledge.

In Super Smash Bros. for Nintendo 3DS / Wii U, Aether's first custom variant is Aether Drive, where Ike throws his sword diagonally into the air, and slams back down. The move offers better horizontal distance, which helps Ike's recovery, but at the same time, the move's vertical distance is shorter than that of the default Aether. The second variant is Aether Wave, which creates a shockwave when landing that extends the range of the attack, but does not deal as much damage. 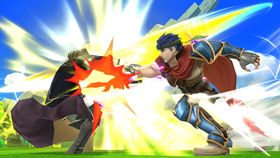 Ike's Counter in Super Smash Bros. for Wii U

Counter is the down special move used by Ike as well as Marth, Roy, and Lucina. The move is based on the combat of the Fire Emblem series; when one unit attacks another unit, the opposing unit counterattacks afterwards. When used, Ike enters a readied stance and automatically counterattacks whenever attacked, reflecting all damage and knockback back onto the opponent. Ike's Counter has greater range and deals greater damage than Marth's Counter, inflicting 1.2 times the damage of the opponent's attack, but, like Roy's, is slower.

In Super Smash Bros. for Nintendo 3DS / Wii U, the first custom variant for Ike's Counter is Paralyzing Counter (spelled Paralysing Counter in PAL regions), in which the attack stuns enemies rather than damaging them. His second variant is Smash Counter, which is slower but deals increased damage and knockback.

According to Masahiro Sakurai, the counter move was meant to reference the turn-based elements of Ike's home franchise.[1] 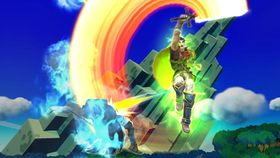 Great Aether in Super Smash Bros. for Wii U

Great Aether is a more powerful version of Aether and Ike's Final Smash. Similar to Aether, Ike swings his sword up, sending any nearby opponents into the air at the center of the stage (or above a nearby platform if the center of the stage is a pit or other obstacle). He then slashes them multiple times before slamming them back down to the ground, which causes a large explosion, knocking them back up into the air. If the first swing doesn't connect with an opponent, the Final Smash will not play out.

Ike appears as a Mystery Mushroom costume in Super Mario Maker, using the same sound effects from Fire Emblem: Shadow Dragon and the Blade of Light as the other Fire Emblem character costumes.

Ike coverage on other NIWA wikis: