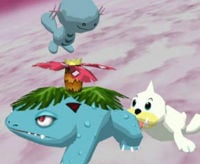 Poké Floats is an unlockable stage in Super Smash Bros. Melee. The stage takes place in the skies of Kanto, the location of many giant floating Pokémon balloons (from which the stage takes its name). To survive on this stage, the player must jump from one Pokémon balloon to the next.

To unlock the stage, the player has to fight 200 matches in VS mode.