From the Super Mario Wiki, the Mario encyclopedia
(Redirected from Falcon Punch)
Jump to navigationJump to search

While Captain Falcon's other Mario-related crossover appearances are very limited, his vehicle, the Blue Falcon, and other elements from his home series have featured prominently in later Mario Kart games (with the Blue Falcon appearing as a kart).

Captain Falcon makes a brief cameo appearance in "Super Mario: Im Rausch der Geschwindigkeit". When Mario and Yoshi are speeding down the road to rebel against the new speed limit law, one panel shows them speeding past Captain Falcon in the Blue Falcon.

Captain Falcon appears as an unlockable character in Super Smash Bros., and is unlocked by clearing 1-P Mode in under 20 minutes and defeating him on Planet Zebes. Despite having a slow walking speed, Captain Falcon has the fastest running speed. His attacks, however, despite being powerful, are for the most part slow. His design in this game is based on his design from F-Zero X, though his outfit is indigo instead of blue.

Captain Falcon's special attacks are unique in that none of them are based upon any aspect of his series of origin. His special moves are the Falcon Punch, which involves Captain Falcon throwing a delayed, yet powerful, fiery punch; Falcon Kick, which has Captain Falcon performing a flame-engulfed flying kick; and Falcon Dive, in which Falcon leaps and causes a small explosion against an opponent he makes contact with.

Captain Falcon is also unique in that he has a total of six playable alternate color schemes beginning with this installment, with two of the recolors being team battle exclusive. One of Captain Falcon's alternate costumes is that of his evil clone, Blood Falcon, including a patch on his uniform saying "25 - Blood Hawk", which corresponds to the number and name of Blood Falcon's own F-Zero machine. Another one of his colors recolors the original, brighter colors used in the F-Zero series. Captain Falcon and Yoshi have the most color changes of the selectable characters in the game, totaling six, although two of Yoshi’s colors are not selectable. 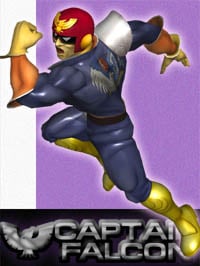 Captain Falcon appears in Super Smash Bros. Melee, this time as a default character instead of an unlockable character (a trait shared with Ness). Captain Falcon also appears as an opponent in Adventure Mode, All-Star Mode, and Event Matches 12, 17, 20, 33, 36, and 43. He is also one of the random characters in Trophy Tussle 1, 2, and 3. Captain Falcon's fighting techniques are shared with Ganondorf, who has similar abilities, but is much slower and has more powerful attacks.

Many of Captain Falcon's moves, such as his smash attacks and neutral aerial, have been completely changed and updated. He also received the side special move Raptor Boost, in which he charges forward to throw a flame-engulfed punch that differs depending on his position: he throws an uppercut while grounded, or an overhand while airborne.

Captain Falcon has a unique way of using certain items in this game. For example, when using a Home-Run Bat, Captain Falcon slams the opponent down and then up again, instead of hitting them across the screen. According to the trophy information of the Star Rod, it has the most power when it is used with a Smash Attack of Captain Falcon or Sheik. 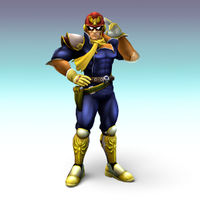 Captain Falcon appears as an unlockable character in Super Smash Bros. Brawl, and can be unlocked by clearing stage 20 in the Subspace Emissary, playing 70 versus matches, or by clearing Classic Mode in 12 minutes on at least Normal difficulty. However, he has been superseded by Sonic the Hedgehog as the fastest runner. Captain Falcon's design is now primarily based on F-Zero GX, though he wears a scarf similar to his design in F-Zero: GP Legend. Captain Falcon's Final Smash is the Blue Falcon, in which he summons the machine to run over any players he catches.

In the Subspace Emissary, Captain Falcon saves Captain Olimar and his Pikmin from a giant R.O.B. Later, he and Olimar save Donkey Kong with the help of Diddy Kong and they join a team with them. After getting through the Subspace Bomb Factory, they meet up with Samus Aran and Pikachu but soon, Ganondorf appears and gets all R.O.B.s in the factory to burn the Ancient Minister and detonate Subspace Bombs to create a giant hole in space. The Minister turns out to be a R.O.B. himself, who joins Falcon's team, and then, after the Subspace Army is taken care of, the whole team decides to leave the area.

Captain Falcon calls his Falcon Flyer and after everyone gets on, they are attacked by Meta Ridley, whom must be defeated in a certain time limit. they all fly to The Canyon where they meet up with everyone else. Everyone enters Subspace and find themselves being turned into trophies by Tabuu. King Dedede and his group then arrive and revive Captain Falcon and most of the others until everyone is revived and able to take on Tabuu. 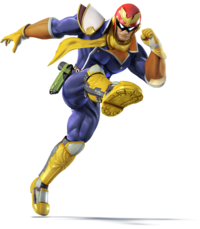 Captain Falcon appears as a default character in Super Smash Bros. for Nintendo 3DS and Super Smash Bros. for Wii U. Although his moveset has remained overwhelmingly the same in regard to aesthetics, it has undergone noticeable mechanical changes that, when coupled with the general gameplay changes, significantly improve his combo game.

Captain Falcon appears as an unlockable character in Super Smash Bros. Ultimate. Captain Falcon is faster on the ground and in the air, while Raptor Boost no longer renders him helpless in the air if he manages to hit an opponent with it. On a related note, Raptor Boost has been repurposed from a potent KO option into a very reliable combo starter. However, both direct and indirect changes to a number of his moves, particularly to his dash grab and down throw, have resulted in in his moveset being riskier to use. 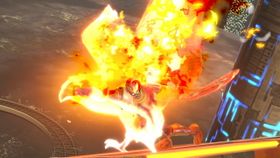 Falcon Punch is Captain Falcon's standard special move. While the move is original to the Super Smash Bros. games and does not originate in F-Zero, it essentially became his signature move, to the point that it was occasionally mentioned and used in F-Zero media.

When using this move, Captain Falcon holds his arm back, charges it up, and then throws a powerful punch that is engulfed by a large, falcon-shaped flame as he yells, "FALCON... PUNCH!" Although it is renowned for its significant power, if Captain Falcon is attacked during the charging process, the attack is automatically canceled. As of Super Smash Bros. Brawl, Captain Falcon can turn around while charging the attack, which gives the attack more power. The player can also hear a falcon shriek when doing this.

In Super Smash Bros. for Nintendo 3DS / Wii U, the Falcon Punch's first custom variant is Falcon Dash Punch, in which Captain Falcon dashes forward as he performs the punch, though it deals less damage and he is vulnerable before attacking. The second variant is Mighty Falcon Punch, which takes longer to charge up and is actually weaker, despite its description stating it is more powerful.

Ganondorf's Warlock Punch functions similarly, but is much slower, more powerful and, as of Super Smash Bros. for Nintendo 3DS / Wii U, protects Ganondorf from being launched. 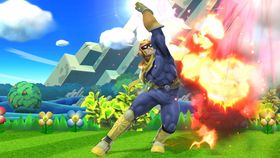 Raptor Boost in Super Smash Bros. for Wii U

Ganondorf's Gerudo Dragon in Super Smash Bros. Melee functions similarly. However, it deals much more damage and launches the opponent diagonally upward, regardless of whether or not the move is used in the air or not. As of Super Smash Bros. Brawl, his Flame Choke uses a similar animation, but is a grab instead of a punch. 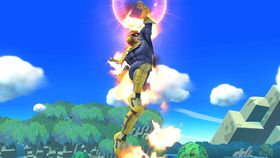 Falcon Dive in Super Smash Bros. for Wii U

Falcon Dive is Captain Falcon's up special move. When used, Captain Falcon leaps upward while his leading hand is engulfed in flames. In addition to being his primary recovery option, if Captain Falcon makes contact with an opponent during his leap, he will grab them and cause an explosion that launches the opponent, and says "Yes!" upon doing so. Captain Falcon can use this attack multiple times consecutively, but only if it hits someone; if it fails to hit, he is left helpless. Ganondorf's Dark Dive functions similarly, but its grab consists of multiple hits instead of two.

In Super Smash Bros. for Nintendo 3DS / Wii U, the Falcon Dive's first custom variant is Falcon Strike, which has a higher jump and results in Captain Falcon throwing an energy-infused uppercut, but at the cost of less horizontal movement. The second is Explosive Falcon Dive, which has a more powerful explosion when hitting an opponent, but at the cost of lower jump height. 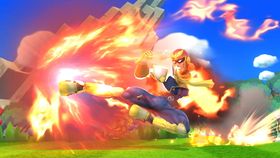 Falcon Kick in Super Smash Bros. for Wii U

In Super Smash Bros. for Nintendo 3DS / Wii U, the Falcon Kick's first custom variant is Falcon Kick Fury, which hits multiple times and can launch opponents at the cost of slower travel speed and a lower damage output. The second variation is Lightning Falcon Kick, which fittingly has an electrical effect instead of a flaming effect. It can also pierce through opponents and travels quickly, but at the cost of much less power. 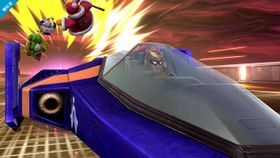 Blue Falcon in Super Smash Bros. for Wii U

Blue Falcon is Captain Falcon's Final Smash. Upon activating it, Captain Falcon calls the vehicle, and it drives past at high speed and hits anybody nearby as he jumps inside. The victims land on a track, where Captain Falcon speeds towards them and runs them over. When returning to the stage, the victims are automatically sent flying. In Super Smash Bros. for Nintendo 3DS / Wii U, the sound effect that plays before starting a race in the original F-Zero can be heard when Captain Falcon speeds towards his opponents. In Super Smash Bros. Ultimate, fiery wings can be seen on the sides of the Blue Falcon.

The Captain Falcon outfit for the Miis

Captain Falcon appears in Super Mario Maker as a Mystery Mushroom costume, using sound effects from the original SNES F-Zero. It can randomly be unlocked after completing the 100 Mario Challenge on Normal or harder, or unlocked by scanning the Captain Falcon amiibo.

"A fighter that possesses both speed and power! But in exchange, he is frequently left open. Being able to successfully land his neutral special, Falcon Punch, can greatly influence the battle in multiplayer matches." 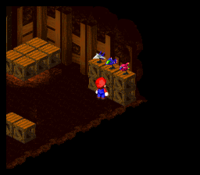 The Blue Falcon in between an Arwing and Fire Stingray in Super Mario RPG: Legend of the Seven Stars
Retrieved from "https://www.mariowiki.com/index.php?title=Captain_Falcon&oldid=3835423#Falcon_Punch"
Categories:
Meta category: