From the Super Mario Wiki, the Mario encyclopedia
(Redirected from Mach Tornado)
Jump to navigationJump to search

Meta Knight is a recurring anti-hero character in the Kirby series, making his debut in Kirby's Adventure. He always wears his metal mask in his series, and usually appears as a rival or a boss Kirby must fight, but on occasions has had to team up with him. He is one of the captains of the Halberd ship. In certain games, after Meta Knight is defeated, his mask splits into two, revealing a face near identical to Kirby's; the main difference being his blue skin tone. He has made crossover appearances with the Mario franchise, mostly in the Super Smash Bros. series.

Although he does not appear as a playable character, Meta Knight has a trophy in Super Smash Bros. Melee, which can be randomly obtained. The trophy's title says Meta-Knight, referring to the group rather than the individual. The trophy also has a factual error: While his first appearance is listed as Kirby Super Star in September of 1996, his actual first appearance was in Kirby's Adventure in May of 1993.

Meta Knight appears as a playable fighter in Super Smash Bros. Brawl. He is a small, quick fighter with fast yet weak attacks. Like in the Kirby series, Meta Knight's cape can transform into a pair of wings which not only grant him multiple jumps but also the ability to glide. His ship, the Halberd, also appears as a stage. Meta Knight's voice actor from Kirby: Right Back at Ya! anime series, Atsushi Kisaichi, provides Meta Knight's voice in the Japanese version Super Smash Bros. Brawl, while Eric Newsome, who provided Bowser's voice in Super Paper Mario, voices him in other versions.

Meta Knight is the only character in the game who does not share a victory theme with the other characters from his series, instead using a metal arrangement of the traditional Kirby victory theme. However, this trait would later be shared with other characters in future installments, such as Bowser.

Meta Knight's story starts before the events of the actual game, trying to defend the Halberd from Master Hand and the Subspace Army, but was unwittingly prevented from doing as such by King Dedede[1]. His actual first appearance is when he suddenly attacks Marth, who is investigating the activity going on in the Battlefield Fortress. Their duel is interrupted when they are surrounded by Primids, and Meta Knight and Marth see they're both against the Subspace Army and team up. Afterwards, they chase after the Ancient Minister. Meta Knight is disarmed when the Minister disables his wings and forces him to change them into a cape. Out of nowhere, Ike shows up and disarms the Subspace Bomb the Minister had been carrying.

Meta Knight, Marth, and Ike ultimately lose the Ancient Minister near the edge of the Wilds, but they find Galleom in the middle of the desert. After it is defeated, Galleom goes to The Ruined Hall and comes out holding Lucas and the Pokémon Trainer in one hand, with a Subspace Bomb about to go off in its head. Although Lucas manages to free himself and the Trainer, Meta Knight saves them when they almost hit the ground.

Meta Knight and his group find the Halberd fighting the Great Fox above the Glacial Peak, and he climbs the mountain while Marth, Ike, Lucas, and Pokémon Trainer stay behind. As he does this, however, the Ice Climbers race him and beat him to the top. At the summit, Meta Knight discovers the Aura Pokémon Lucario, who challenges him to a duel. The duel ends, the loser gets turned into a trophy and the winner taps on the trophy base to recover him.

After the battle, Meta Knight and Lucario agree to team up and enter the Halberd, where they find Solid Snake thanks to the use of Lucario's Aura. Lucario assures Meta Knight and Snake that they are on the same side and they join forces in taking back the Halberd as Primids approach. The three of them rescue Peach and Zelda from their evil counterparts before heading to the cockpit to find many Mr. Game & Watches controlling the Halberd. Lucario and Snake take care of them with the princesses, Fox McCloud, and Falco Lombardi while Meta Knight takes the helm, regaining his ship.

Eventually, Meta Knight goes into Subspace with the other heroes, although the Halberd is destroyed by the Subspace Gunship as they do this. They find the real mastermind, Tabuu, who fires his Off Waves at them and turns them into trophies. Kirby, however, is revived by one of King Dedede's badges and recovers Meta Knight along with some of the others before they go into the Great Maze to stop Tabuu. 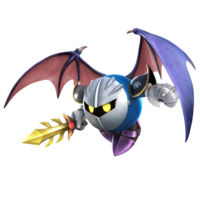 Meta Knight returns as a playable character for Super Smash Bros. for Nintendo 3DS and Super Smash Bros. for Wii U. He, along with other winged characters Pit and Charizard, can no longer glide, either normally or at the end of Shuttle Loop, though Shuttle Loop now hits twice instead. Aside from this, however, Meta Knight's moveset has not been changed. His design has been slightly altered for this installment, giving him metal gauntlets over his gloves. Meta Knight's mobility is improved, but his overall damage output is toned down, his recovery is worsened, his attacks are slower, and their range is decreased.

One of Kirby's alternative palettes is identical to what Meta Knight looks like without his mask (though the palette has yellow eyes), armor and cape in the early Kirby games. In addition, two of Meta Knight's new alternate costumes are based on Dark Meta Knight and Galacta Knight.

Meta Knight returns in Super Smash Bros. Ultimate as an unlockable playable character. Meta Knight benefits from universal changes: his mobility is faster, his short hop timing is shortened, the landing lag in his aerials is reduced, the reintroduction of directional air dodging extends his recovery, and he gains the abilities to use any ground attack out of a run and his aerial attacks on ladders. Meta Knight also receives direct improvements, such as his forward tilt and forward and back aerials having larger hitboxes, and his dash attack and up and down smashes dealing more damage.

It has been requested that this article be rewritten and expanded to include more information. Reason: include information on Meta Knight's Final Smash in Super Smash Bros. Ultimate 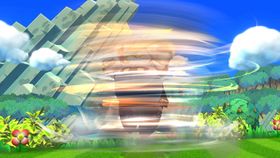 Mach Tornado in Super Smash Bros. for Wii U

Mach Tornado is one of Meta Knight's abilities in the Kirby series, namely Kirby Super Star and its remake, which appears as Meta Knight's standard special move. When used, Meta Knight spins around rapidly, creating a whirlwind around himself that traps opponents and deals damage to them, with the final hit dealing greater damage and knockback. The move lasts longer if the player continuously presses the button, which also gives the move some vertical height, and the player can also move while using the move; the vertical and horizontal distance this move receives are both greater in the air. When the move ends, Meta Knight enters a helpless state if he is in the air.

The custom variants for this move in Super Smash Bros. for Nintendo 3DS / Wii U are Entangling Tornado and Dreadful Tornado.

Entangling Tornado draws in opponents and deals a single hit with greater knockback, but it offers less horizontal control than Mach Tornado, as well as much less damage. In Super Smash Bros. Ultimate, Mach Tornado itself is reworked into a single-hitting attack. Thus, it deals higher knockback and travels quicker, but has a hampered damage output and no extra maneuverability, due to the loss of the ability to button mash.

Dreadful Tornado deals more powerful hits and offers much stronger knockback, but its duration cannot be extended by tapping the special move button. The move also has more ending lag than Mach Tornado, which leaves Meta Knight vulnerable to counterattacks. 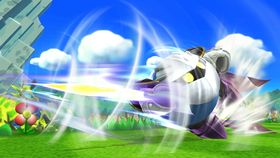 Drill Rush in Super Smash Bros. for Wii U

Drill Rush (originally known under the name Triple Dash[2]) is Meta Knight's side special move in Super Smash Bros. Brawl and Super Smash Bros. for Nintendo 3DS / Wii U. It is based on the move of the same name when Kirby obtains the Master ability in Kirby & The Amazing Mirror.

Meta Knight flies forward in a spinning motion, continuously hitting any opponents in his path for the move's duration. While Meta Knight is moving, the player can change his trajectory by tilting the Control Stick or Circle Pad. If the attack ends in the air, Meta Knight is left in a helpless state, unable to use another move until he lands. In Super Smash Bros. for Nintendo 3DS / Wii U, hitting a surface while Meta Knight is in motion causes him to bounce off of it, automatically ending the move. In Super Smash Bros. Ultimate, Drill Rush's hits connect more reliably, while its final hit deals more knockback.

In Super Smash Bros. for Nintendo 3DS / Wii U, Drill Rush is given two customizable variants:

The first variant is High-Speed Drill, which increases the speed and the distance of the move, but it deals less knockback than Drill Rush, and its trajectory can't be altered either.

The second variant is Shieldbreaker Drill, which delivers greater damage to shields, but it deals less knockback overall, and does not travel as far as the other Drill Rush variants. 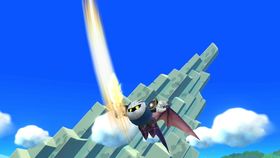 Shuttle Loop in Super Smash Bros. for Wii U

Shuttle Loop is a move originally used by Wing Kirby in Kirby Super Star incorporated as Meta Knight's up special move. Meta Knight leaps up into the air, slashing once, and loops around before flying up higher. In Super Smash Bros. Brawl, this move automatically enters into Meta Knight's glide, while in Super Smash Bros. for Nintendo 3DS / Wii U the move ends with Meta Knight dealing a second attack, and then entering a helpless state.

In Super Smash Bros. for Nintendo 3DS / Wii U, this move has two custom variants:

Blade Coaster enables Meta Knight to travel forward instead of up, enabling him to cover more distance horizontally, but it offers less vertical distance, and takes a bit longer to start up. Opponents who are hit by this attack are sent flying at a lower angle. 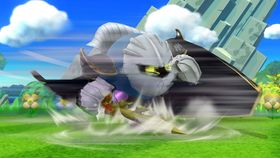 Dimensional Cape in Super Smash Bros. for Wii U

In Super Smash Bros. for Nintendo 3DS / Wii U this move can be customized with two unlockable variants:

The first is Shield Piercer, which makes Meta Knight's attack unblockable, but its startup lag and ending lag are increased, and it deals much less damage and knockback than normal, making it more risky to use against low damaged opponents. It also does not travel as far as Dimensional Cape. Oddly, despite being unblockable, Bayonetta's Witch Time can counter Shield Piercer.

The second variant is Stealth Smasher, where Meta Knight travels farther than normal, and his attack deals more damage as well. However, despite its name, the move does telegraph where Meta Knight will strike, which makes it easier for opponents to detect Meta Knight's location, and even counter his attack. 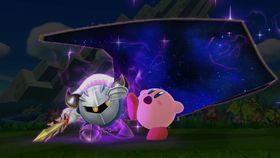 The beginning of Galaxia Darkness in Super Smash Bros. for Wii U

Meta Knight appears in his Kirby's Adventure appearance in Super Mario Maker as a Mystery Mushroom costume. It can be unlocked randomly after completing the 100 Mario Challenge on Normal difficulty or higher, or unlocked by scanning any Meta Knight amiibo.