From the Super Mario Wiki, the Mario encyclopedia
(Redirected from Fly (Pokémon))
Jump to navigationJump to search

This article is about the fire Pokémon featured in the Super Smash Bros. series, who is known as Lizardon in Japan. For the boss from Wario's Woods, see Lizardon.

“Charizard, the Flame Pokémon, graced the package cover of Pokémon Red. Its fiery breath can melt anything, but it never turns its flame on an opponent weaker than itself.”
—Tips, Super Smash Bros. Ultimate

Charizard appears in Super Smash Bros. as a Poké Ball Pokémon. When summoned, it turns from side to side, using Flamethrower to attack opponents.

In Super Smash Bros. Melee Charizard once again appears as a Poké Ball Pokémon, retaining its attack and pattern from the original game, but this time using a 3D model ported from the Nintendo 64 Pokémon Stadium games instead of a 2D sprite, like all other Poké Ball Pokémon.

Charizard appears as one of the Pokémon used by the Pokémon Trainer (alongside Squirtle and Ivysaur), who remains in the background of a stage while Charizard fights. Charizard is the heaviest of the three Pokémon, but is also the strongest and the fastest, though it walks the slowest. It is also capable of gliding, one of three characters in the entire game with this ability. Like in the Pokémon games Charizard is also affected by an emulation of the series' type effectiveness; it takes more damage from water attacks but less from grass attacks. Charizard also has a limited stamina, which decreases as it is on the field but replenishes while it is not, but its attacks are weaker as its stamina decreases.

Charizard's standard special move is Flamethrower, which involves Charizard breathing a continuous stream of fire. Its side special move is Rock Smash, which has it break a rock with its head to damage opponents, and its up special is Fly, which has Charizard fly directly up into the air. When its down special Pokémon Change is used, Charizard is switched out with Squirtle, and is switched in when used as Ivysaur. Its Final Smash, shared amongst all three Pokémon, is Triple Finish, in which Charizard performs Fire Blast.

Charizard returns as a playable character in Super Smash Bros. for Nintendo 3DS and Super Smash Bros. for Wii U. However, in both games, it is a standalone fighter, rather than being one of the Pokémon Trainer's Pokémon, due to the removing of in-battle transformation moves. As such, Rock Smash takes the place of Pokémon Change as its down special move, while its new side special move is Flare Blitz, which involves Charizard flying directly forward, covered in fire which also damages itself. Charizard's new Final Smash is Mega Evolution, which involves it Mega Evolving into its Mega Charizard X form[1]. In addition, the glide and type effectiveness mechanics have also been removed.

Like all the other playable Pokémon, Charizard can be equipped with the X Attack, X Defense, and X Speed equipment. Additionally, Charizard can use the Fake Nails equipment, making it the only fighter in the game who can use three different attack equipment types.

Charizard appears, along with Squirtle and Ivysaur, as part of the Pokémon Trainer's team in Super Smash Bros. Ultimate. Its moveset is similar to that seen in Super Smash Bros. for Nintendo 3DS / Wii U, with Rock Smash being replaced by Pokémon Change. Furthermore, its stamina mechanics are removed, allowing it to be used for the whole fight with no penalty. Just like in Super Smash Bros. Brawl, its final Smash is Triple Finish and no longer has it Mega Evolving into its Mega Charizard X form. Its type effectiveness mechanic is also abolished, which removes Charizard's vulnerability to Water-type attacks (e.g., those that Squirtle uses), but, in exchange, eliminates its resistance to Grass-type attacks (e.g., those that Ivysaur uses).

Charizard benefits from the game's universal changes: its overall mobility is faster (in spite of having a slightly slower walking speed); its aerials have less landing lag; its short hop timing is shortened; it can directionally air dodge; and it can use any grounded attack out of a run and any aerial attack while on ladders. Charizard's overall damage output and its attacks' knockback are both increased. In a similar vein to fellow veteran Sonic the Hedgehog and newcomers Inkling and Incineroar, Charizard takes minor damage from swimming in water; this is due to it both being unable to swim its home games and being weak to Water-type Pokémon in said games. 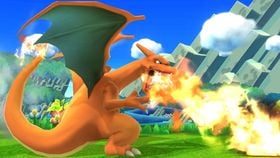 Flamethrower in Super Smash Bros. for Wii U

Flamethrower is a Fire-type move appearing throughout the Pokémon series and as Charizard's standard special move. Similar to Bowser's Fire Breath, Charizard spits a stream of fire from its mouth for as long as the player holds down the special move button, but it becomes shorter and weaker over time. The direction of the stream of fire can be adjusted by tilting the control stick.

Super Smash Bros. for Nintendo 3DS / Wii U also give this move two custom variants: Fire Fang and Fireball Cannon. Fire Fang, also a move from the Pokémon games, breathes a continuous short stream of fire that hits more quickly and ends with a bite attack that deals higher damage and knockback, while Fireball Cannon breathes fireballs that travel further and do not get much weaker, but deal less damage overall. Finally, Charizard also uses Flamethrower while using its down throw. 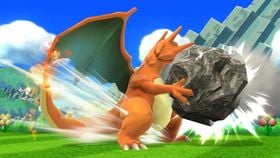 Rock Smash in Super Smash Bros. for Wii U

In Super Smash Bros. for Nintendo 3DS / Wii U, the first custom variant for this move is Sinking Skull, which buries the rock and decreases the power of the move but allows Charizard to bury opponents. The second is Rock Hurl, which sends out rock shards at a higher angle but does not deal as much damage. 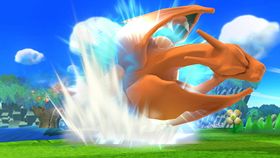 Flare Blitz in Super Smash Bros. for Wii U

Flare Blitz is Charizard's side special move in Super Smash Bros. for Nintendo 3DS / Wii U and Super Smash Bros. Ultimate, based on the Fire-type attack in the Pokémon series and taking the place of Rock Smash from Super Smash Bros. Brawl. Charizard flies directly ahead, covering itself in fire, and is knocked back slightly when it hits anything. Charizard is also dealt recoil damage throughout the entire attack. The attack's range is quite long, but Charizard does risk self-destructing itself if it goes off-stage while using it.

This move has two unlockable variants in Super Smash Bros. for Nintendo 3DS / Wii U:

The first is Blast Burn, another move from the Pokémon series, which is slower and does not travel very far, but ends with a larger explosion that deals more damage, both to the opponent, and Charizard.

The second is Dragon Rush, a Dragon-type move from the Pokémon series, which is less powerful, has a shorter travel distance, and does not have the fire effects. To make up for those drawbacks, however, the attack delivers multiple hits to opponents, and it does not damage Charizard. Lastly, Charizard does not get knocked back if it hits anyone while using the attack, and its shorter travel distance reduces the risk of self-destruction, making the move more effective for recovery than the other Flare Blitz variations. Mega Charizard X can also perform this attack.

On a side note, whenever Flare Blitz activates a fighter's Counter, the counterattack only takes into account the hit before the explosion. 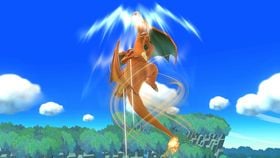 Fly in Super Smash Bros. for Wii U

Fly is a Flying-type move appearing in every installment of the Pokémon series and as Charizard's up special move. Charizard flies up into the air in a spiral motion, dealing multiple hits to any opponents caught in the attack. In Super Smash Bros. Brawl, Charizard covers itself with fire when flying into the air, while in Super Smash Bros. for Nintendo 3DS / Wii U, this is replaced with wind.

The move is also used by other, non-playable Pokémon in the Super Smash Bros. series. In Super Smash Bros. Melee onward, the move used by Moltres as a Poké Ball Pokémon is Fly. Mew, Jirachi, and Celebi are also stated to use this move for their appearances.

In Super Smash Bros. for Nintendo 3DS / Wii U, the first custom variant for this move is Rising Cyclone, which does not give as much vertical distance, but draws in foes, and has greater launching ability. The second is Fly High, which increases Charizard's flying height, but does not inflict any damage to opponents.

Triple Finish is the Pokémon Trainer's Final Smash, in which all three Pokémon join in to attack. During the move, Charizard uses Fire Blast. 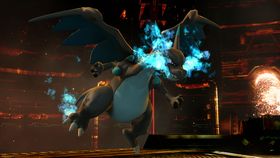 Charizard's Mega Evolution in Super Smash Bros. for Wii U

Mega Evolution is Charizard's Final Smash in Super Smash Bros. for Nintendo 3DS / Wii U, replacing Triple Finish in Super Smash Bros. Brawl. Charizard Mega Evolves into its Mega Charizard X form, given to it in Pokémon X and Y, allowing it to freely fly around the stage, similar to Yoshi's Super Dragon. Pressing the special move button attacks with Fire Blast, which sends out a fireball that explodes into the kanji 大 (dai, "big") when it hits, and the standard attack button is Dragon Rush, which sends Charizard flying in the direction held on the control stick; both attacks deal multiple hits to opponents.

Mega Charizard X cannot flinch from any attacks, but it can still take damage, which decreases how long the Final Smash remains in effect.

Artwork of Charizard from Pokémon Red Version and Pokémon Green Version can be used as a stamp in Mario Artist: Paint Studio.

Charizard appears as an unlockable costume in Super Mario Maker. It can be unlocked by scanning the Charizard amiibo onto the GamePad, or at random by clearing the 100 Mario Challenge on Normal or a more difficult setting. The costume turns Mario into a sprite of Charizard based on the species' appearance in the Nintendo DS Pokémon games. While Mario's appearance changes with the costume, like with the other Pokémon costumes, the sound effects remain the default Super Mario Bros. sounds.

Charmander, Charizard’s first stage form, appears as a costume as well. It is unlocked by completing the I Choose You! Event Course after picking the Charmander path. Unlike the fully-evolved Charizard, Charmander uses Pokémon sound effects.

Charizard coverage on other NIWA wikis: