From the Super Mario Wiki, the Mario encyclopedia
(Redirected from Huge Red Electrokoopa)
Jump to navigationJump to search

“Some weird turtle is doing bad stuff back there! It's crazy!”
—Pianta, Super Mario Sunshine

The Electro-Koopa King,[1] also known as the Huge Red Electrokoopa[2] and Giant Koopa,[3] is a large variation of the Red Electrokoopa species with a similar sleeping behavior to the Snooza Koopa species, both from Super Mario Sunshine. Despite the name given by Prima Games, it is actually dark green. Like the other Koopa Troopas in the game, it is found at Pinna Park, specifically in Episode 5, The Runaway Ferris Wheel. In spite of being an individual large version of an existing enemy and being called a "king," it does not technically act as a boss in the game, as it never attacks. 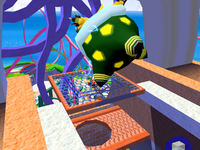 Mario defeating the Electro-Koopa King. This picture also shows the relative scale between Mario and this Koopa.

The Electro-Koopa King is the source of the problem in The Runaway Ferris Wheel and sleeps on a metal grate behind the Ferris Wheel. Its electrical discharge makes the ride spin uncontrollably, surprising the visitors at the park. Mario can defeat the Koopa by flipping the grate beneath it, causing it to fall in the water, and making a Shine Sprite appear atop the flag on the Ferris Wheel. After the Koopa is defeated, the Ferris Wheel's speed returns to normal.