These are original designs of characters and early scripts from the Super Mario Bros. film.

An early clay sculpture showcased what the film would have been like, with realistic Warp Pipes and a checkerboard-pattened path for Mario and Luigi to follow. Some concept art initially showcased that King Koopa was originally going to be played by Arnold Schwarzenegger, who would wear armor based on Bowser's artwork. There were also some more humanoid concepts for the Koopa King, including a version wearing samurai-like armor. Goombas were apparently going to be more like humanoid mushrooms rather than de-evolved foot soldiers. Toad was also going to be a humanoid similar to his game counterpart. Koopa Troopas would have appeared as humanoid turtles, but were cut. Piranha Plants, Thwomps, and Hammer Bros. would have also appeared, but were also cut. An early design for the Bob-omb resembled its counterpart from Super Mario Bros. 2, while Yoshi would have resembled a juvenile T-Rex.

In an interview with Mark McCoy, designer of the movie, McCoy released an early script of the movie-the original script was much different from the one that remained. The unused script has a character known as Doug that does not make the final cut and the scene where Mario and Luigi meet Daisy was changed. There is also another unused script from 1991 written by Tom S. Parker and Jim Jennewein. This 1991 script is more fantasy based and is closer to the video game, having more elements from the game than the actual version: King Koopa kidnaps a princess named "Hildy", and makes her his bride so he can get the Crown of Invincibility, so now Mario and Luigi, along with their friend Toad go on an adventure to save Hildy. Then a few hours later, Toad betrays the Mario Bros. and goes to work for Koopa, but then he started having regrets about the mistake he did, and redeems himself near the end.

Fire Snakes were originally written into the desert sequence of the Super Mario Bros. film, but were cut for unknown reasons. Scripts state that they "[...] resemble moray eels, their mouths filled with pointed piranha-like teeth," and that "[t]hey gnaw through the skin, burrow into the body cavities, and lay their larvae. It can take weeks for the host to die."

Earlier drafts named Toad as "Lemmy" (in reference to Lemmy Koopa) and The King as "King Bowser". While these were re-written in the final draft of the film, the official novel refers to The King as Bowser, and the Super Mario Bros. Trading Cards refer to Toad as "Lemmy" still.

A scene cut from the final film that was briefly shown in some trailers and previews, involves President Koopa chasing down Daisy's mother in New York City.[1] This scene would have served as the explanation for why Dinohattan is designed very closely like New York City, including Koopa's Tower matching the World Trade Center; Koopa was inspired by the New York architecture to replicate the look.

Scapelli Construction is the direct competitor to Mario Bros. Plumbing in the film. A shot in the final film involves Mario and Luigi pulling up to the Riverfront Cafe for a plumbing job, only to find a Scapelli Construction van arrived before them, thus putting them out of the job. A deleted scene would involve Mario and Luigi actually entering the cafe, and confronting two of Scapelli's employees, Doug and Mike.[2] They witness Doug and Mike lying to the restaurant owner, Pascal, about how their service will take two days to run up their company's profits. Mario angrily says that it is supposed to be a two hour job. Ultimately, Pascal chooses to go with Doug and Mike for the job, but offers Mario and Luigi free dinner for their troubles. Though Doug and Mike still appear briefly in the film, they are not referred to by name or receive any speaking roles. Two of the Super Mario Bros. Trading Cards are about this deleted exchange, and an official talking Mario figure would have included a quote from this film where Mario says, "Nobody touches my tools!"

Mojo Nixon, the actor that played Toad in the film, shared on Youtube an extended version of the song he sings before he is arrested.[3]

In the film, Spike and Iggy mistakenly kidnap various women they believe to be Daisy and then lock them up at the Goomba Barracks of Koopa's Tower. A short scene would have occurred where they offer one of their Goomba guards a cigarette.[4] 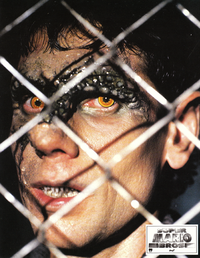 Mark Miller, playing one of the "lizard men". 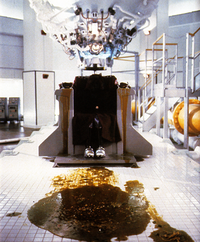 A devo technician reduced to goop.

In the final cut of the film, the brothers witness Toad being de-evolved into a Goomba in the Devo Chamber, then taken away. Mario angrily pushes President Koopa, where he slips into the Devo Chamber chair, and the brothers proceed to make their escape. There is a scene that was filmed in between Toad's de-evolution and President Koopa's push, where Mario and Luigi also witness a Devo technician being put in the Devo Chamber, and when he re-emerges out, he explodes and leaves behind large amounts of a brown slime.[6][7] This would be when Mario's character angrily pushes President Koopa, making him trip on the brown slime. The extended sequence would have President Koopa narrowly escaping de-evolution from the machine, as he nervously states that he's fine, "after all, I did invent this machine." His eyes briefly turn into lizard eyes during this scene, a foreshadowing to his eventual demise at the film's conclusion.

After Iggy and Spike's arrest, Daisy runs into the duo at Koopa's Tower. She tells them, "You miserable lowlifes!" before they explain they are now reformed, and then lead her to formally meet her father, The King. The first meeting between the King and Daisy is removed in the film, but the final cut does have a scene shortly after where Mario and Luigi briefly visit Devo 4 to encounter Daisy and the King. Spike and Iggy are not present for this scene. There are two trading cards based on these scenes, one for Daisy encountering Spike and Iggy, and one for Daisy meeting The King.