From the Super Mario Wiki, the Mario encyclopedia
(Redirected from Duck Hunt Duo)
Jump to navigationJump to search

Duck Hunt (known as Duck Hunt Duo in European languages, and individually referred to as Dog and Duck) is the name that refers to the playable tag team of a hunting dog and a duck in Super Smash Bros. for Nintendo 3DS / Wii U and Super Smash Bros. Ultimate. True to their team name, the dog and duck hail from the NES video game Duck Hunt. In addition to their appearances in the Super Smash Bros. series, the dog and variants of the duck have made other crossover guest appearances within the Mario franchise in other instances, mainly within the WarioWare series.

In WarioWare, Inc.: Mega Microgame$!, a microgame called Duck Hunt appears, and has overall the same gameplay as the original NES game, with the player using the Game Boy Advance to shoot ducks.

A Duck Hunt microgame similar to the one from WarioWare, Inc.: Mega Microgame$! appears in WarioWare: Twisted!, this time using the Game Boy Advance cartridge's tilt sensor to aim.

While the dog does not appear in WarioWare: Touched! at all, the Duck Hunt microgame uses clay pigeons from Duck Hunt's Game C. The original sprites of the ducks are also occasionally released from the ball in the microgame Clawing for More after clearing it.

Gameplay of Duck Hunt can be seen on the Nintendo DS' top screen in stage 19 of Standard Marathon mode in Tetris DS, where the dog and duck make a cameo. The dog also appears as a sprite on the touch screen during this stage. 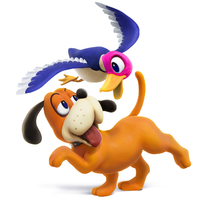 Duck Hunt appear as unlockable newcomers in Super Smash Bros. for Nintendo 3DS and Super Smash Bros. for Wii U. Although they fight as a duo,[1] Duck Hunt do not truly adhere to the tag team archetype first used by the Ice Climbers and perpetuated by Rosalina & Luma. This is due to the duck's own hurtbox being directly next to the dog's hurtbox at almost all times. Duck Hunt's moveset largely consists of moves based around the NES Zapper and games that use it, particularly Hogan's Alley and Wild Gunman, while incorporating physical attacks from both the dog and duck.

Duck Hunt's standard special move is Trick Shot, in which the dog kicks a tin can from Hogan's Alley forward that can be subsequently fired at with the Zapper. Their side special move is Clay Shooting, in which the dog throws out a clay pigeon from Duck Hunt's Game C that will then explode upon being fired at by the Zapper. Their up special is Duck Jump, in which the duck flies upward while carrying the dog. Their down special is Wild Gunman, which spawns one of the five titular gunmen to attack. Lastly, their Final Smash is NES Zapper Posse, which consists of a flock of ducks from Duck Hunt ramming the opponent into a field before the gunmen from Wild Gunmen fire at them and the cutouts from Hogan's Alley.

In regard to character customization, Duck Hunt are the only fighters who can use the Collar and Feather equipment to boost their defense and speed, respectively. The duo can also use the Zapper equipment to boost their attack strength, which is another reference to their home game. A Duck Hunt-themed stage simply called Duck Hunt also appears in both games. In the stage, the sprite versions of the dog and the ducks appear, even if Duck Hunt themselves are fighting on the stage. In addition, Duck Hunt are the only playable characters in Super Smash Bros. for Nintendo 3DS / Wii U to break the fourth wall in their trailer.

Duck Hunt return as unlockable veterans in Super Smash Bros. Ultimate. In the transition to Ultimate, they received noticeable improvements to their moveset and the dog can run faster, although they are now noticeably lighter. The dog is also much more vocal, as he barks and yelps in a number of instances instead of solely during their star KO animation. Along with several other characters, Duck Hunt retain their victory theme from the previous game, albeit sped up. 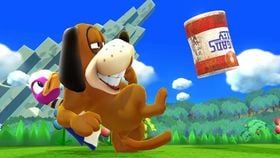 Trick Shot in Super Smash Bros. for Wii U

Trick Shot (named Trick Shooting in British English) is Duck Hunt's standard special move. The move involves the dog kicking out a tin can from Hogan's Alley, which bounces forward for every time the special move button is pressed. The player can press the button eight times before the can automatically explodes the next time. It also explodes when it hits an opponent, the explosion able to damage both them and Duck Hunt. The direction the can moves can be changed by attacking it from the other side. Finally, the number of times the special attack button is pressed before it explodes determines how powerful the explosion is.

In Super Smash Bros. for Nintendo 3DS and Super Smash Bros. for Wii U, this move has two custom variants: High-Explosive Shot, which makes the can fly out more quickly, but explodes it after two button presses; and Zigzag Shot, which sends out a can that moves back and forth after every button press, and the explosion sends any players caught upward. 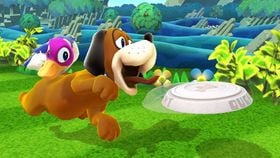 Clay Shooting in Super Smash Bros. for Wii U

Clay Shooting is Duck Hunt's side special move, based upon the clay shooting mode in Duck Hunt. The dog throws a clay pigeon that flies across the screen, exploding when the player presses the special attack button a second time to shoot it, the Zapper firing three shots that also deal damage. The pigeon only explodes once the player presses the button, though it still damages opponents.

In Super Smash Bros. for Nintendo 3DS and Super Smash Bros. for Wii U, the first custom variant for this move is Rising Clay, which causes the pigeon to arc downward and then fly up when tossed; however, the pigeon does not explode, meaning that it deals less damage. The second is Clay Break (named Clay Destruction in British English), which tosses the clay farther and at a higher arc but the pigeon itself does not damage opponents and the shots are more spaced when detonating, though are more powerful. 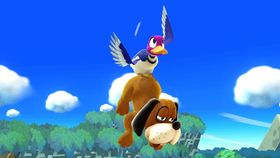 Duck Jump in Super Smash Bros. for Wii U

Duck Jump (named Duck Jump Duo in the British English version) is Duck Hunt's up special move. The duck starts to fly up into the air, carrying the dog with it. Players can control their horizontal movement while the duck flies, but cannot end the move early on their own.

In Super Smash Bros. for Nintendo 3DS and Super Smash Bros. for Wii U, the Duck Jump's first custom variant is Duck Jump Snag, which involves the dog also biting any nearby fighters, but the duck cannot fly as high. The second is Super Duck Jump, which pushes the duo high into the air, creating a whirlwind that pushes away opponents, but the player cannot move as far horizontally. 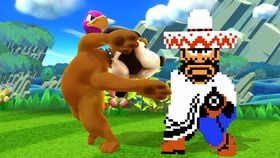 Wild Gunman in Super Smash Bros. for Wii U

Wild Gunman is Duck Hunt's down special move. The dog pulls out one of the five titular gunmen from Wild Gunman, which each have different properties, such as damage output and speed of firing. Attacking them momentarily stuns them, and if they receieve 5% or more, they do not fire at all. Each gunman appears at least once during a match, but when all five have appeared, the gunman that spawns when using this move the sixth time and beyond will be chosen randomly for the remainder of a match.

In Super Smash Bros. for Nintendo 3DS and Super Smash Bros. for Wii U, Wild Gunman's first custom variant is Quick Draw Aces (parsed Quick-Draw Ace in the British English version). This variant speeds up how quickly the gunmen can fire and slightly increases their damage outputs, but their shots have less range and less knockback. The gunmen also have only 1 HP, and will not fire at all if they are damaged by any kind of attack.

Wild Gunman's second custom variant is Mega Gunman, which summons giant versions of the gunmen that have 40 HP. However, the gunmen take longer to fire, and their shots deal slightly less damage. 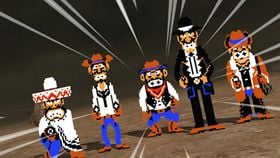 NES Zapper Posse in Super Smash Bros. for Wii U

NES Zapper Posse is Duck Hunt's Final Smash. The dog summons a flock of ducks that fly through the stage, trapping any opponents caught by them. They are then taken to an area where they are caught between the Wild Gunmen shooting at the cutouts and tin cans from Hogan's Alley. After taking repeated damage from the barrage of bullets, the opponents are then launched and Duck Hunt returns to the stage. If the flock of ducks do not connect with any opponents, the Final Smash fails.

Every character in the Final Smash (except the opponents) uses 2D sprites, including the dog and duck (who otherwise appear with their updated 3D models). Also, no matter what color Duck Hunt is, they will always be shown in their default appearance during the attack.

In Super Mario Maker, Duck Hunt make an appearance as a Mystery Mushroom costume, which plays sound effects from Duck Hunt for certain actions. Upon transforming into Duck Hunt, the perfect score tune plays, and whenever they jump, the dog barks. If they fall into a pit or lava, the dog's laughter can be heard. The costume can be unlocked by scanning the Duck Hunt amiibo, or unlocked randomly after completing the 100 Mario Challenge on the Normal setting or higher.

In Pixels, the dog appears as a trophy awarded by the aliens for defeating the Centipede army in London.