Not to be confused with Statue Mario. 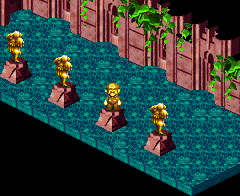 A Plumber's Lament next to some gold statues of Valentina

“Observe...the thick mustache...covering the sad, innocent smile of a simple fool... And the sideburns...conveying his blue collar roots. And the legs...well defined... Strong. The legs of the masses! Is it to your liking?”
—Garro, Super Mario RPG: Legend of the Seven Stars

A Plumber's Lament is the name of a piece of art created by Garro of Nimbus Land for the kingdom's queen Valentina during the events of Super Mario RPG: Legend of the Seven Stars. The gold-colored statue is a depiction of a plumber. According to Garro, the sculpture's thick mustache covers the "sad, innocent smile of a simple fool," the sideburns symbolize the plumber's "blue collar roots," and the strong, muscular legs represent the "legs of the masses." While Valentina initially disliked the sculpture, after Garro's analysis of his statue, she lauded A Plumber's Lament, calling it a piece of "gentle beauty" and "raw power." Valentina has the statue put on display by her servant Dodo next to gold sculptures of herself.

Unknown to Valentina, A Plumber's Lament is actually Mario in disguise as part of a plan to break into Nimbus Castle to restore King and Queen Nimbus to the throne. To expose Valentina's plot, King and Queen Nimbus need to be freed from the castle. However, only those with official business with Valentina are allowed entrance. Therefore, Garro and Prince Mallow devise a plan to get Mario past the guards by turning him into A Plumber's Lament. To do so, Garro applies a coat of gold dust all over Mario to make him look like a gold sculpture. Mario, standing perfectly still to add to the effect, is then delivered to Valentina, allowing Mario to enter the castle. After Valentina is removed from the throne, Garro creates a true sculpture of Mario.