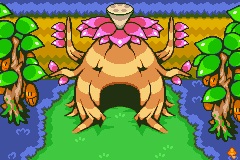 Mother Chuckalola, also known simply as Chuckalola, is a large, female tree found at the very end of Mario & Luigi: Superstar Saga's Chucklehuck Woods area, where she houses the Chuckola Reserve. She is a tan tree with pink leaves and a large, striped trunk with a door-like entryway at her base. Her name is a play on "Chuckola" and the female given name "Lola".

Chuckalola is first mentioned by Chuckleroot, who informs Mario and Luigi that the "great tree" is right ahead. The brothers then come upon and enter the tree, however they were preceded by Popple and Rookie who are promptly captured by Bubbles, the man who tends to the Chuckola Reserve. Upon Mario and Luigi's arrival, the Chuckola Reserve morphs into Chuckolator and Bubbles sends it after the brothers. After the Chuckolator's defeat, it reverted into the Reserve and Bubbles collapsed the floor of Mother Chuckalola, sending it, along with Mario and Luigi, to an underground cavern.