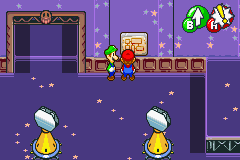 “This is a region map. It shows your current location and the location of Save Albums. If you lose track of where you are, just check your map.”
—In-game advice, Mario & Luigi: Superstar Saga

Region Maps are objects found in the Beanbean Kingdom in the game Mario & Luigi: Superstar Saga. They are first seen in the Chucklehuck Woods, later appearing in Woohoo Hooniversity, Oho Ocean, Teehee Valley, Gwarhar Lagoon, and Joke's End. A region map is always found on a wall. When Mario and Luigi consult the map, a basic diagram of the area they are currently in is shown. An animated sprite shows the area of the region the brothers are currently in, while the blue sprites on the map show Save Albums and their locations in the region.

Region Maps do not return in Mario & Luigi: Superstar Saga + Bowser's Minions, as the mini-map makes them obsolete.