Thought Trial Stew or Mistake were useless? See these!

They are based on the fruit of the same name, specifically the Cavendish banana.

("Bananas are based on bananas. Who would've thought?" — ShootingStar7X (talk))

In the Mario universe, barrels do not differentiate from those in the real world. A barrel is made of several vertical convex staves (fourteen in the latest appearances) bound to form a pseudo-cylindrical vase, which is the barrel itself. Four gray steel hoops (only three in the New Super Mario Bros. games, and two in Wario Land 3) circle the staves: two of them are each placed at one of the barrel's base, while the other are donned on the barrel's bigger circumferences.

("This is so descriptive, it's hilarious. A description like this belongs on Wikipedia, not here. - Ultimate Mr. L (talk)")

The Blast Cannon, when purchased, is wheeled to the Boss Room by the Item Shopkeeper. She then clicks his fingers, the Blast Cannon then fires a bomb at the boss, which causes a small amount of damage.

Like pipes, Wario struggles for a short while to squeeze his fat buttocks to get inside.

The Blue Shell (AKA: Flying Spiny Shell, Flying Wonder, Blue Demon, etc...) Is a variety of shell that appears in Mario Kart series. Upon being shot, it chases after the kart whom is first place to kick character's ass and lose time to that character to win the race.

("I used the Blue Shell in first place. I got bombed. It was awesome." - Stooben Rooben (talk))

In Mario Kart 7 and Mario Kart 8 Bullet Bills slow down when nearing the end of its lifespan - which makes it less likely for a player to be thrown off the course.

("Who exactly wears these mysterious shells?")

Thanks to its fame as a well-known, household object, cheese has been found and referenced in many games and media, mostly in other forms [...]

("Mistake at the end is simply GOLD.")

...They are not to be confused with Command Blocks from the popular game, Minecraft.

("Yes, because blocks that determine what move you do can totally be confused with blocks from a different game that spawn zombies, create lightning strikes, make TNT fall from the sky, and construct an entire computer.")

In this Gaddget, a player must find out how much they love their girlfriends or boyfriends

("Obviously, the player can't get enough")

Drill can refer to...

In the show, the Coconut's abilities are pretty inconsistent and in each episode it's in it does whatever the plot demands.

After Mario defeats RoboBrood, the Broodals and their robot fly into the air, exploding into fireworks featuring the defeated Broodals' agonized faces.

It can be useful when they want to land on a useful space so far..

Unlike ? Blocks and Brick Blocks, Hard Blocks cannot contain anything, but can contain a key in Super Mario Maker. They cannot be destroyed by Mario himself, but by other methods, such as Mega Mario.

(They cannot contain anything, but they actually can. Also, they cannot be destroyed by Mario, but by Mario.)

Dyllis can mix a Power Steak and a Fresh Veggie to create a Hot Dog (though how she is able to make a pork tube out of a slab of steak is a complete mystery).

The simplest items in the game can make Life Shrooms, so Mario should stock up on the useless flora because they'll pay off later.

I heard it was possible to hack it into Mario's inventory, and that it restores 5HP and 3FP. Is this true?! I am leaning on NO, but... ...who knows? Please reply. Niiue - Who has lost his tail?

The Megaflash Jump may be placed into the Sticker Museum as #6, alongside the other Jump-based stickers. Its description describes it as a large, strong, and shiny sticker with incredible attack power and a nice aesthetic to boot.

("I didn't notice the subtle irony here until just now. See if you can, too." - The Mansion (talk))

In gact, upon using the item, the animation is the exact same as one; including the last sheep*.

*This link brings you to the Sammer Guy of the same name.

Although Nitro Honey Syrup was never produced, recipes for it could apparently be found in the Ratooey Businessman's briefcase. Although it is, by normalcy, powerful enough to perform miraculous acts such as even raising the dead, Eat your heart out, Mrs. Butterworth.

These blocks help you to do a big jump.Your jump doubles when you jump on one.Rarely, the have precious items.

Orange grenade is a basic weapon in DonkeyKong 64 that appear in every level there is also an evil version called Darth Orange that some enemeis use like Klumps and Zingers there are also some little sences with the oranges like Klump eating one and his belly inlargeing and tiny juggeling them.

A single painting makes an appearance in Luigi's Mansion, the one Mario is trapped in, which serves as Luigi's primary goal.

("Ignoring the fifty bazillion other paintings throughout the game, including the other ones heavily-important to the plot.")

While peaches are not commonly eaten in the Mushroom World, their presence has lead to the conception of the term, "peachy." This word can either be used to describe flavor or show one's positive opinion regarding a situation. While adventuring with Mario, Princess Toadstool was eaten by Belome. He commented that she tasted, "peachy" in Super Mario RPG. Later, Princess Peach would adopt this as a catchphrase, first using it during her second kart tournament and later while rescuing Mario from Bowser in Super Princess Peach, and once more when doubling herself during her adventures in the Sprixie Kingdom in Super Mario 3D World.

In Super Paper Mario, Poison Shrooms are a much more common occurrence than in its predecessor, occasionally being dropped by Zombie Shrooms, Cursyas, and their relatives. If you find one DON'T EAT IT.

Poop (to the left) in the microgame "Fruit Fall" in the Japanese version of WarioWare, Inc.: Minigame Mania.

Poop (or Feces) is animal excrement that first appeared in the WarioWare, Inc.: Mega Microgame$!. In the North American version of the games, most poop was replaced with something else. For example, a mini-game in WarioWare, Inc.: Mega Microgame$! has Wario trying to catch fruit and diamonds in the United States; in Japan, the diamonds were actually poop.

One small exception to Nintendo's removal of poop can be found in WarioWare: Twisted!, where Wario had to dodge a bird poop in a mini-game present unabridged in both versions of the game. Also, in the microgame What Goes In..., after the food gets out of the body, it'll transform into a piece of poop.

Poop appears in WarioWare: Smooth Moves in Crowd Control where one of the things the player can scare people with was poop.

In Wario: Master of Disguise, when one of Arty Wario's drawings come out wrong, the drawing will turn into a piece of poop with eyes and legs and then run away from Wario. When it crashes into something it will disappear. However, if it crashes into Warp Doors or Blocks, the poop will destroy the Warp Door and Block. Also, if poop touched an enemy, the poop will immediately destroy the enemy. This is also helpful in a boss fight Wario has later in the game. A mini-game, called Trash It also has the player putting many objects to the place where they belong (for example, a Baseball with a Baseball Glove). One of the objects is poop, and the player, using the Stylus, must guide it to a toilet.

("I guess you could say that the image in the gallery is "crappy quality"". - Results May Vary (talk))

("Fun fact: Korea has an alcoholic beverage made from fermented poop, ttongsul, so this is not totally fantasy as you might think.") - Bazooka Mario (talk)

A move that lives up to its name,and if you get hit by it you'll go flying

When Mario is near a Power Moon, he'll tilt his head to look at it.

("Along with pretty much everything else in this game." - Keyblade Master (talk))

Power Stars are mystical artifacts with great power. Unlike the regular Stars, which only give limited invincibility, Power Stars grant the player great strength, power, energy and speed.

("Where exactly do they grant Mario any of these?" - LeftyGreenMario (talk))

("There's actually some truth to this, but that wording is horrible.")

Red Coins are coins that sometimes appear along with Yellow Coins in the Mario series. The only difference between a yellow coin and a red coin is that red coins are red and they are worth 2 coins while yellow coins are yellow and are worth one coin.

("A Red Ring is a red ring. Other rings like this had this sort of description before this proposal passed which decided to stop using the "description" parameter for literal descriptions." - Keyblade Master (talk))

Red Shells are red Koopa Troopa shells that first appeared in Super Mario Bros. Although not their first specific use, they were worn by Koopa Troopas.

The Red Shell's first appearance was in Super Mario Bros. They are found being worn by Koopa Troopas.

A Reverse Mushroom from Mario Party 3

A Reverse Mushroom is an uncommon type of Mushroom. It is the opposite of a Super Mushroom, causing someone who is enlarged to shrink and vice versa. This mushroom can be used against foes.

It made its debut in the Battle Game found in the main menu of the Super Mario All-Stars version of Super Mario Bros. 3, where it would reverse the two players' positions on the screen or reverse their Super/Small forms.

It also appears in Mario Party 3. It is green with a red U-turn symbol on it and is Donkey Kong's favorite item. The player who has it can make any player on the board (including themselves) go in reverse when they are moving across it, until they reach a fork or area with multiple paths, then the person inflicted can choose to go forward in another direction, or still go backwards.

("Despite these two obviously unrelated mushrooms having absolutely nothing in common outside of being mushrooms (with the All-Stars item not even bearing an official name), this wiki had inexplicably considered them to be the same item since 2006, with no one bothering to say anything to the contrary until November 2019, and it taking until January 2021 for anyone to actually bother splitting it. It's astonishing how long nonsensical artifacts from Super Mario Wiki's stone age can survive for." - 7feetunder (talk) 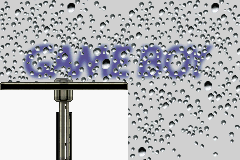 At the screen, it says "Game Boy".

It is unknown why Bowser commissioned the creation of Smart Bombs, though he may have done it in order to counteract the effects of the stupifying Stupid Bombs in case they backfired on the Koopa Troop. It seems Smart Bombs may actually have been as bad an idea as Stupid Bombs were, as when a Snifit accidentally breathed in the fumes of one, he became super-intelligent and usurped Bowser as king.

(Because speculating to pad out an article is always good. -TheDarkStar (talk))

Strawberry is based upon the real-world fruit of the same name.

Superball Flowers turn Mario into Superball Mario. This gives the Mario the ability to shoot Superballs.

A Surprise Ball (also known as a ! Ball) is a spherical block that Baby Yoshis use during the events of Yoshi's Story. They are round in shape and float in mid air. To use it, the Yoshi must use his tongue on these objects, and they will be pulled in, and thrust upwards, ending up standing on top of it.

They are always placed on the ground, waiting for the characters to use them in certain contexts. 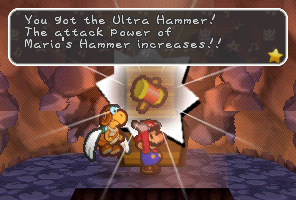 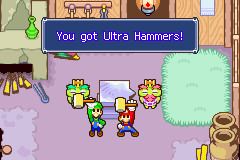 Mario and Luigi receive the Ultra Hammer in Paper Mario.

Is a player in Wario Kart Wiim he is yellow

("I wonder how well a pile of crap can drive." - Stooben Rooben (talk))

("I thought we were done with this")