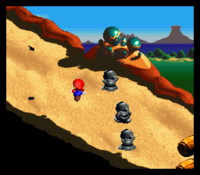 Beetles are a species that appear in Super Mario RPG: Legend of the Seven Stars.

In Super Mario RPG: Legend of the Seven Stars, Booster collects beetles, but does not catch them himself, instead forcing his Snifits to make a hobby of capturing the beetles for him. By renting a Beetle Box for 150 coins and traveling to Booster Hill, home of the Beetle Race minigame, anyone can join in the fun and try to catch beetles along with the Snifits. Each Beetle can then be traded at Beetles Are Us for a predetermined amount of coins. Golden Beetles are worth one Frog Coin, male beetles are worth fifty coins, and females only one coin. A beetle also appears as a playable character in the Beetle Mania game that can be purchased from the Beetle Mania Toad in Mushroom Kingdom for 500 Coins.