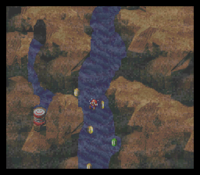 Midas Waterfall[1][2] is a large, segmented waterfall that feeds the Midas River in Super Mario RPG: Legend of the Seven Stars. After being flushed out of the Kero Sewers, Mario and Mallow are flung down the falls. While letting himself be carried by the current (though it was also possible to swim slightly upstream, so as to slow down Mario's fall), Mario can try to grab coins and Frog Coins scattered all around the surface of water. The waterfall refers to a figure in Greek mythology, Midas, who is a king who turned everything he touched into gold. At the bottom of the fall, Mario and Mallow land on a barrel floating in the Midas River.

The waterfall reappears in the short book, Mario and the Incredible Rescue. Mario, Luigi and Toad travel through the Midas River to get to Tadpole Pond. They get there after falling off the waterfall, an event that later inspires Mario to compose a song on the flute called "Falling Down a Waterfall", which he plays for Toadofski.