Mona's Pig, also known as Mona's Piggy, is one of the Yum Yums appearing in the WarioWare series. It is a small, anthropomorphic pig. It often helps its owner to get rid of her pursuers. Like Mona's other animals, it wears a shirt, namely a yellow one with the number "2" on it. Mona's Pig is able to shoot Soccer Balls. It first appeared in WarioWare, Inc.: Mega Microgame$!.

Mona's Pig on the scooter

In WarioWare, Inc.: Mega Microgame$!, Mona's Pig is stored along with Mona's Elephant and Mona's Monkey in her scooter. When the Diamond Police chase after Mona because of speeding, she deploys her animals for help. After another police car begins to chase her, Mona deploys her pig. The Pig kicks a soccer ball at the police car, stopping it. However, more police cars appear. Mona lastly deploys her Monkey, who stops police cars by throwing banana peels at them.

After Mona reaches the Gelateria and dismounts from her scooter, all three animals can be seen cheering outside of the scooter.

Mona's Pig on the

In WarioWare, Inc.: Mega Party Game$!, Mona's pig can be seen on her scooter when she drives to her new workplace at Restaurant Sora Sora.

Mona's Pig also makes a small appearance in Mona's multiplayer mode Listen to the Doctor!. It can be seen along with Mona's Elephant on the

button prompting the players to clap.

In WarioWare: Twisted!, Mona's employer Pizza Joe deploys the animals directly on Mona's cap when she is pursued by The Dinosaurs. The three animals stand on each other with Mona's Pig being in the middle. Mona's Pig wears hi-tech goggles similar to the Monkey this time, although they can only be seen in its large sprite. While they are stacked, the Pig blows away the soccer balls the Elephant tosses up with its nose.

When Mona arrives at the customers' home, the three animals can be seen standing on each other in the same order as before behind Mona.

In WarioWare: Touched!, Mona's Pig appears along with Mona's Elephant and Mona's Monkey in small aircraft to help Mona, Art, and Deco escape from Vanessa and the Dinosaurs, but get knocked away by Vanessa's falcon-like vehicle. Instead of them, the new animals 4.1 and 4.2 play a more important role. 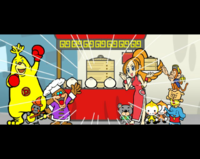 Mona's Pig on the right

In WarioWare: Smooth Moves, Mona's animals make a minor appearance again. In the story of Young Cricket & Master Mantis, the manager Joe, Mona, Art and Deco serve dumplings. Next to Mona, the three animals stand on each other in the same order as their WarioWare: Twisted! appearance.

Mona's Pig and the rest of the pets cleaning

Mona's Elephant, Pig, and Monkey appear in Mona's story in WarioWare: Get It Together! As Mona leaves in the morning, she bids her pets goodbye and orders them to "be good" while she's gone; however, they immediately begin trashing her home and she returns that night to a disaster. She proceeds to get very mad at them and forces them to clean up after themselves, only for the same thing to occur the following day.