Pot Hole Panic is the twenty-ninth level in Donkey Kong Country 3: Dixie Kong's Double Trouble! It is also the fourth area of Razor Ridge. The level takes place in a purple cavern with four sections where Dixie and Kiddy can ride on each of the four Animal Friends. In the first section, the Kongs get to ride Squawks, who encounters Kopters and Booty Birds along the way. This is followed by a water portion, where the Kongs can optionally ride Enguarde (for the only time in the entire game if playing the SNES version) by breaking his animal crate to the right of the letter O. There are Kocos, Bounty Basses, and Lurchins in the underwater section. After this, the Kongs can ride Ellie, where she must avoid Kopters and bombs thrown by Kuchukas, who make their first appearance in the level. Ellie can reach the letter N and the first Bonus Barrel. Lastly, the Kongs can ride Squitter, who can reach the letter G and the second Bonus Barrel. 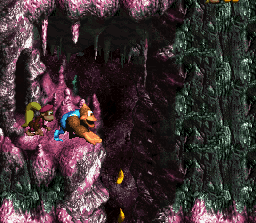 The start of the level

When the Kongs begin the level, they must fall into a thin gap and land on a crate with Squawks in it. They should grab onto the parrot and ride to the east. As they fly through the mostly straight path, they are greeted by Kuchukas, whose bombs must be avoided at all costs. After passing four Kopters gliding in and out of small alcoves, the heroes must float downwards, and then hover to the west. As they travel in this area, they need to defeat a few Booty Birds. Soon, the heroes find an underwater area. There, Squawks drops them off and flies away. So, the monkeys need to swim over a few Kocos to find Enguarde. The large fish must be ridden through the water, beating many different species of foes. After the three swim through the narrow paths around several Lurchins and Bounty Basses, they enter an open area with more Lurchins. They need to swim around the foes and swim in a U shaped path to find the outside of the lake, where they must hop off of Enguarde and jump onto a ledge. There, they can find the Star Barrel, as well as a crate.

Halfway through the level, the group needs to break open the crate near them to find Ellie. The friend must be ridden through an area full of rowdy Kuchukas and Kopters. After they dodge each of the foes on the eastward path, they must fall into a gap and land into another lake. There, the Kongs have to say goodbye to Ellie as they leave her and hop up into a high up barrel nearby. It shoots them to the next area, where Squitter can be found. The spider must be ridden under two dangerous Kopters. After that, the heroes must avoid a Booty Bird, being surrounded by another Kopter. Once they pass this short part, the monkeys and Squitter should continue east and watch out for the bombs of a Kuchuka. Farther on is a No Animal Sign. Squitter disappears when this sign is passed, allowing the Kongs to get onto the flagpole to the right and exit the level.