This is a list of profiles and statistics for Donkey Kong.

Donkey Kong
Place of origin: Circus
Disposition: Rowdy
Game appearances: Donkey, Jr., GB Donkey
Mario is my oldest friend
"Mario and I have been known each other since the NES was first released, so it's been more than 10 years now. Back then, I was in the circus and Mario was my trainer. One day, I got fed up with the circus life and ran away with a beautiful lady. That's when the chase between me and Mario began..."

The star of the show - at least to begin with. DK is the friendly giant of the jungle, a hulking primate with not a bad bone in his body. Yes, he can be clumsy and stubborn, but the only person he's ever really held a grudge against is old adversary K. Rool, as much his arch-enemy as Mario was Cranky's (so he keeps telling them). DK loves the tranquillity of his island home and the friends and family that live there with him, but there are two things in life most important of all: bananas and adventure. Conveniently, thanks to the Kremlings' thieving instincts, the two often go hand-in-hand...

He's the leader of the bunch, you know him well
He's finally back to kick some tail
His Coconut Gun can fire in spurts
If he shoots ya, it's gonna hurt
He's bigger, faster, and stronger too
He's the first member of the DK crew!

Sometimes the apple falls far from the tree. Donkey's father, Cranky, was extraordinarily successful in his younger years as a video game wrongdoer. Since the end of his career he has been trying to make Donkey his successor. But he had no desire to kidnap innocent girls as an notorious fiend just to have them rescued by another hero. Donkey preferred to be the hero himself, and has long since made a name for himself in this respect. Proudly he wears the highest medal of the DK Islands that is awarded for exceptional service in the name of the Kong clan: the red necktie. Thanks to his muscular strength, Donkey is the most important defender when the Kremlings once again have nothing better to do than to steal the entire banana supply of the Kongs. 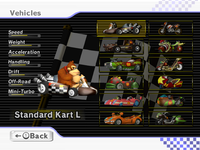 Bio: DK's every swing is a thing of heroic proportions as he relies on his simian strengh to blow the ball by his opponents. 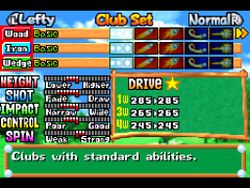 "A gorilla known for raw power, DK lives a carefree jungle life... unless someone messes with his bananas, in which case he just loses it. His ancestor, the original Donkey Kong wore no necktie. His talents lead in beating on primate foes and kart-racing. Fear his Banana Ball!" 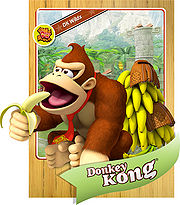 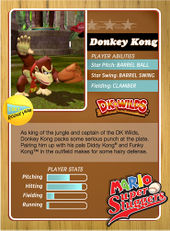 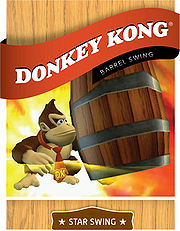 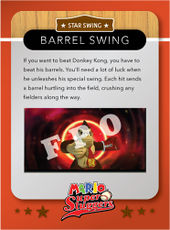 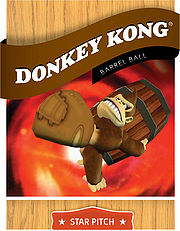 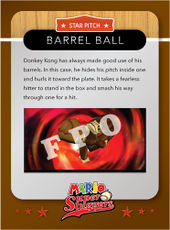 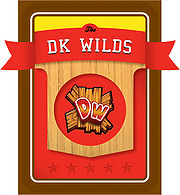 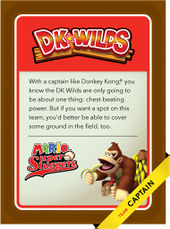 "As king of the jungle and captain of the DK Wilds, Donkey Kong packs some serious punch at the plate. Pairing him up with his pals Diddy Kong and Funky Kong in the outfield makes for some hairy defense."

The constellation that appears when Donkey Kong receives all presents.

"His charged punch is one of the strongest attacks in the game! In Super Smash Bros. Ultimate, his Final Smash has been updated from Konga Beat to a flurry of punches!"

Donkey Kong
"Although this mild-mannered king of the jungle isn’t the brightest banana in the bunch, he boasts exceptional strength with which he hopes to dominate the Olympic Games. Since DK and his friends normally live in the jungle, these Olympic Games are perfect for his training regimen."

Donkey Kong
The king of the jungle, and the Kong family's superstar!
He possesses a large body and extraordinary strength! He can also easily hurl massive barrels, and can smash the ground, causing huge tremors as a result!
But, he's usually easy-going, though maybe a bit absentminded.
By working together with his partner Diddy Kong, his grandpa Cranky Kong, and other similar friends, they punish anyone who disturbs the peace of the jungle.
Bananas are DK's greatest, most favourite food ever! He keeps lots of Bananas in his house all the time. If you try to take them, watch out, because he'll get awfully angry!

The king of the jungle, and superstar of the Kong family.
He has superhuman strength, to such a degree that he can easily fling huge barrels, and create strong tremors by slapping the ground.
Bananas are his favorite food, and there are always a lot of them at his house.

The official home of Super Mario[edit]

The king of the jungle whose trademark is his red necktie, which bears his initials.

Donkey Kong can hurl giant barrels with the greatest of ease, and is so powerful the ground shakes when he pounds on the ground.

He loves bananas and always keeps a large stash of them in his treehouse.[4]