This is a list of profiles and statistics for Dixie Kong.

A wilful and adventurous young chimp, inseparable from Diddy and every bit as stubborn as he is on the issue of how far their friendship goes, despite (or possibly because of) Cranky and Funky's endless teasing. Dixie's main asset in the dangerous situations she always seems to be following DK and Diddy into is her remarkable ponytail, which she can use to whip enemies out of her way, pick up and throw barrels, and even glide through the air helicopter-style. Brave, determined and always fashion-conscious, Dixie makes a loyal friend to Diddy and a formidable Kremling-basher to boot. 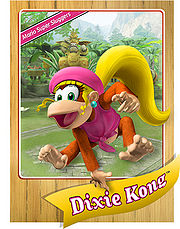 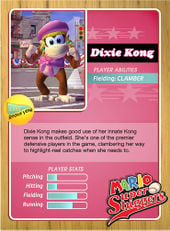 Dixie Kong's trophy in the US version of Super Smash Bros. Melee erroneously states that Donkey Kong Country 2: Diddy's Kong Quest was released in December of 1995, even though the game was actually released in November of 1995 in the US.