This is a list of profiles and statistics for Birdo.

Birdo
Tribe: Dinosaur clan
Disposition: Self-centered
Game appearances: USA
The face of Super Mario USA, appearing in commercials
They appear as mid-bosses in each stage of USA. Some hit you with eggs, some blow flames, and others come in various colors. He also appeared in TV commercials, so I guess he is the most famous of the USA characters.
When Birdo throws eggs at you, throw them back at her!
The eggs that Birdo fires can be ridden on. Lift it up and hit Birdo with it. If you hit her three times, you're in the clear.
Throw the Mushroom Blocks!
The only way to get to Birdo, who only has a flame attack, is to hit her with a Mushroom Block. If you hit her with three Mushroom Blocks, you will clear the stage. 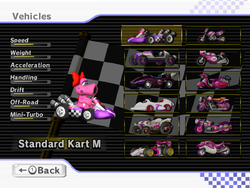 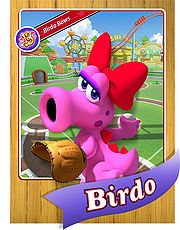 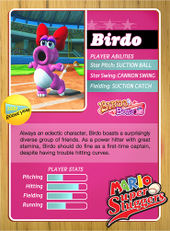