This is a list of profiles and statistics for Bowser Jr. 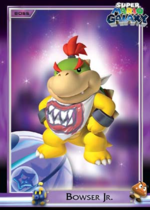 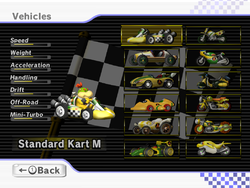 "The Jr. Clown Car this little fella rides in takes less damage when attacked than Bowser Jr. himself—so try to stay in the car when taking damage. The different color variations are the Koopalings!"

Bowser Jr.
Bowser's prankster of a son. Since Dad spoiled him rotten, he now expects to get his way. Despite his selfishness, he still holds Father in high regard, and wants nothing more than to impress him.

Bowser Jr.
Bowser's son. He works together with his father to hinder Mario and friends.

Bowser Jr.
Bowser's son, who first appeared in Super Mario Sunshine. He works together with his father to commit crimes.

Bowser Jr.
King Bowser's son. A naughty brat who loves mischief.
He resembles Bowser when he was younger.
Although his body is still small, he's hiding the Bowser power he's inherited! In actual fact, Bowser Jr. may also be considerably smart! By riding a vehicle known as the 'Junior Clown Car', he's been a nuisance to Mario. If Bowser Jr. doesn't get what he wants, he won't settle down, it's one of the selfish traits he has.
The scarf with a picture of a large mouth drawn on it is his favourite. It's just a picture of his aspiring dad's mouth!

The son of Great Demon King Bowser.
His trademark is the mask with the big mouth drawn on it.
His body is small, but it hides the power he inherited from his father.
He also has a selfish side, and can't settle down unless he gets the things he wants.

The official home of Super Mario[edit]

The only son of Bowser, the King of the Koopas. He's often seen wearing a mask with an intimidating mouth drawn on it.

Bowser Jr. is small but has inherited great strength from his father.

He may throw a tantrum if things don't go his way. He's know to cause plenty of trouble and can be a bit selfish.[3]