From the Super Mario Wiki, the Mario encyclopedia
(Redirected from Fighting Alloy Team)
Jump to navigationJump to search

Big Battlefield in Super Smash Bros. for Wii U

Battlefield is a recurring stage within the Super Smash Bros. series, appearing in every installment to date. The stage has been designed specially for the Super Smash Bros. series and does not originate from any other Nintendo franchise. Battlefield is a floating stage consisting of a large floor platform and three smaller pass-through platforms hovering above it. The stage does not have any hazards, like Final Destination, which allows players to solely concentrate on the fight. The design has changed in each installment, with early appearances having it in a dark void and later ones in scenic floating ruins.

In Super Smash Bros., Battlefield is the stage where the Fighting Polygons are battled. However, much like Final Destination, the stage cannot be played in VS Mode.

Super Smash Bros. Melee is the first game to feature Battlefield as a selectable stage. It can be unlocked by completing All-Star mode on any difficulty. In addition, the Fighting Wire Frames as well as the metal enemies are battled on it.

In Super Smash Bros. Brawl, Battlefield returns as a default stage. The stage now takes a natural green landscape as opposed to the abstract background in the previous games. It also features a day and night system that changes the time of day as the battle goes on. The stage is once again the location where the Fighting Alloy Team is battled.

The Super Smash Bros. for Nintendo 3DS / Wii U variations of this stage take a lot from the design of the Super Smash Bros. Brawl version, as it is in a natural green landscape and features a day and night system that changes as the battle goes on, but the background has been improved slightly. The 3DS version's background consists of several jagged, slanted mountains jutting out from the clouds, while the Wii U version features several floating islands of old, broken architecture covered in small plant life, with a visible moon the center. Additionally, the Wii U version has a larger variant named Big Battlefield designed for 8-player matches, though it can still be used by less players. The platforms are arranged similarly to a pyramid and there are three additional platforms. The Ω form of Battlefield removes the pass-through platforms, although the day and night cycle still occurs. This stage shares its Ω form with Big Battlefield.

The Super Smash Bros. Ultimate variation bears a close resemblance to its predecessor, with similarly styled platforms and main arena. Instead of ruined structures, buildings still intact as well as many waterfalls can be seen in the background. Big Battlefield returns as well. Additionally, every stage in the game includes a Battlefield form, which changes the layout of each stage to resemble Battlefield. In the version 8.1 update released on August 4, 2020, Small Battlefield was added, which features only two platforms, making its layout similar to that of Pokémon Stadium. The update also added the ability to play any song in the game on all three variations of Battlefield as well as on Final Destination.[1]

Not in My Music[edit] 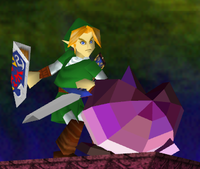 The Fighting Polygons (also called the Fighting Polygon Team) are a group of weak enemies found in Super Smash Bros. They possess very little attack and defense prowess, but their numbers can pose a threat (the player fights 30 of them in the penultimate stage of the 1P Game).

Their bodies are all the characters' basic polygon structure (hence their name), all colored purple. Their designs appear edited from the original mode. They do not have the voices of the characters they are modeled after, making them completely silent. For example, Kirby's version appears as a cake, and Yoshi's version has three teeth. Mario, Luigi and Ness' versions look very similar to each other, only being told apart by their moving pattern (Ness's version makes the same glittering noise of the real Ness when jumping) and that the Ness one's nose is lower than Mario one's nose. 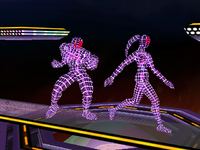 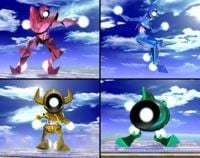 The four different types of Alloys in the Fighting Alloy Team in Super Smash Bros. Brawl

The Fighting Alloy Team makes an appearance in Super Smash Bros. Ultimate as an Advanced-class support spirit that occupies one support slot. Fighters that use this spirit will start a battle with a Ray Gun. The spirit battle takes place on the Battlefield form of Final Destination, where the player faces four Captain Falcons, four Zeldas, four Marios and four Kirbies.

The Fighting Mii Team appears in Super Smash Bros. for Nintendo 3DS / Wii U and Super Smash Bros. Ultimate, replacing the Fighting Alloy Team. Unlike the previous teams whose characters have a set appearance, the Fighting Mii Team uses Miis that are saved in the player's system; the Miis' heads are loaded onto a pre-set body and are randomly given either the Mii Brawler, Mii Swordfighter, or Mii Gunner moveset, albeit without special moves, grabs, and the abilities to pick up items and grab ledges.

Battlefield coverage on other NIWA wikis: