From the Super Mario Wiki, the Mario encyclopedia
(Redirected from Triple Finish)
Jump to navigationJump to search

This article is about the character in Super Smash Bros. Brawl. For other uses of "Trainer", see Trainer.

A Pokémon Trainer is a human that catches, trains, cares for, and battles alongside Pokémon. The player character in the Pokémon series is fittingly a Pokémon Trainer, as are most humans in the series.

Red, the player character of the Pokémon series' first generation and male player character of Pokémon FireRed Version and Pokémon LeafGreen Version, makes a playable appearance in Super Smash Bros. Brawl as a default fighter and (alongside his female counterpart Leaf) in Super Smash Bros. Ultimate as an unlockable fighter. However, Red and Leaf are referred to simply as "Pokémon Trainer", and differ from other fighters by issuing commands to three Pokémon (Squirtle, Ivysaur, and Charizard) to fight on their behalf. 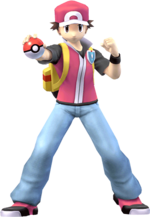 Red, albeit known simply as "Pokémon Trainer", is the first playable Pokémon representative in the Super Smash Bros. series who is not an actual Pokémon. Though a selectable character, he is not an actual fighter, instead commanding any of his three Pokémon in the background of the stage, his team consisting of Squirtle, Ivysaur, and Charizard. The only move the trainer performs is Pokémon Change, which allows the player to switch out his three Pokémon at will throughout the battle. He also automatically switches Pokémon whenever one is KO'd. The Pokémon also run on a stamina system that weakens them, as their stamina decreases the longer they are out on the field. Their Final Smash is Triple Finish, which has the trainer send out all three Pokémon at once to attack. In English, the Pokémon Trainer is voiced by Michele Knotz.

Pokémon Trainer is one of the few fighters to only get five alternate costumes in Super Smash Bros. Brawl, instead of the usual six. This is also shared with fellow Pokémon representatives Lucario and Jigglypuff, as well as Sonic. One of Pokémon Trainer's alternative costumes has the same colors as another Pokémon Trainer: Brendan's outfit from Pokémon Emerald.

For unknown reasons, Pokémon Trainer's name is announced differently between the English and Japanese versions of Super Smash Bros. Brawl. This trait is shared with Fox McCloud in the original Super Smash Bros.

The Pokémon Trainer in The Subspace Emissary

In The Subspace Emissary, he allies with Lucas, who helps him find his Charizard and Ivysaur. The two also encounter Wario and a large Subspace Army robot, Galleom. They are saved from the robot's detonation by Meta Knight, and they team up with him, Marth, and Ike afterwards. When encountering a huge Subspace Army group on the foothills of a mountain (Meta Knight has left to retake the Halberd), they are saved by Mario and his team (Link, Yoshi, Pit, and Kirby).

Pokémon Trainer returns as a playable character in Super Smash Bros. Ultimate. With the removal of the stamina system, one can play as Squirtle, Ivysaur, or Charizard for an extended period of time with no penalty. This time, a female Pokémon Trainer variant can also be used, akin to Villager, Wii Fit Trainer, Robin, Corrin and Inkling, and like them, is statistically identical to the male one. She is represented by Leaf, the female player character of Pokémon FireRed and LeafGreen Versions. In English, Billy Bob Thompson (who also voices Greninja) voices the male Pokémon Trainer, while Kate Bristol voices the female. In Japanese, Tomoe Hanba voices the male trainer and Wakana Minami (previously known by her stage name, Wakana Kingyo) voices the female trainer. A majority of the male Pokémon Trainer's quotes are also different from Super Smash Bros. Brawl as well. 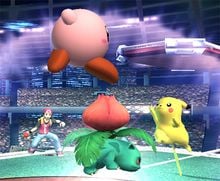 Pokémon Change is the Pokémon Trainer's down special move, and by extension the down special move of Charizard, Squirtle, and Ivysaur. The move is based on the ability for players to switch out their Pokémon mid-battle in the Pokémon series, allowing players to switch between using Squirtle, Ivysaur, and Charizard in that order. Pokémon Change is also automatically used whenever one of the Pokémon's stamina is depleted or whenever one is KO'd. This move cannot be used immediately after respawning, or at all in midair. Status effects are also not carried over between Pokémon, though damage percentages are, and a Pokémon's stamina recharges while it is not in use.

In Super Smash Bros. Ultimate, the move is much faster, and the stamina mechanic is removed. It can also be done in midair. 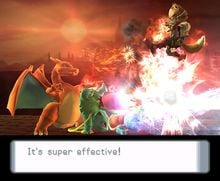 Triple Finish is the Pokémon Trainer's Final Smash. The trainer sends out all three of his Pokémon to attack at the same time. Ivysaur hits with SolarBeam, a narrow beam of light that fires across the screen; Charizard with Fire Blast, a flame projectile that travels across the screen; and Squirtle with Hydro Pump, a water attack that sprays in multiple directions at close range, all of which deal continuous damage before opponents are knocked back by the final Fire Blast. If a player is too close to the team while they are attacking, they are knocked into the air rather than into the attack.

Throughout the entire attack, a text box designed after the ones in Pokémon Diamond and Pearl (in Brawl) or Pokémon Sun and Moon (in Ultimate) appears on the bottom of the screen, saying, "Take that, Triple Finish!" If the attack hits, the dialogue changes to say, "It's super effective!", referencing the type effectiveness mechanic of the Pokémon series.