From the Super Mario Wiki, the Mario encyclopedia
(Redirected from Shinku Hadoken)
Jump to navigationJump to search

“You must defeat my Shoryuken to stand a chance.”
—Ryu, "Here Comes a New Challenger! RYU" trailer 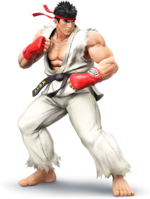 Similar to Mario and like in the Street Fighter series, Ryu is an "all-around" character. However, this is only in terms of basic attributes; unlike Mario and unlike in his home series, Ryu is designed to be a very difficult but rewarding character who relies on combos and dexterity, to highlight the differences between Super Smash Bros. and traditional fighting games. All of Ryu's attacks also originate from the Street Fighter series. Like in the original Street Fighter, the power of Ryu's attacks is dependent on how long the player holds down the attack buttons. His standard special is the Hadoken, his side special is the Tatsumaki Senpukyaku, his up special is the Shoryuken, and his down special is Focus Attack. By inputting the original Street Fighter button inputs for his special moves, they are stronger when executed. Ryu also has two Final Smash attacks, the only character in the game with this distinction. If used normally, the Final Smash is a Shinku Hadoken, which sends a larger Hadouken across the screen that can pull in fighters; if used next to an opponent, the Final Smash is a Shin Shoryuken, which is a more powerful Shoryuken.

Ryu reappears in Super Smash Bros. Ultimate as part of the base game alongside the other DLC characters from the previous installment, this time as an unlockable character. His appearance has been updated to reflect his design in Street Fighter V. In one-on-one matches, Ryu always faces his opponents, similar to his original games. In addition, Ryu's friend and rival, Ken Masters, appears as an Echo Fighter of Ryu.

Ryu benefits from some universal changes such as: reduced short hop timing; less landing lag in his aerials; the reintroduction of directionally air dodging; and the ability to use any ground attack out of a run, and any of his aerial attacks while climbing ladders. Ryu also benefits from being able to Special Cancel all of his moves. Adding to his already complex and unique moveset, some of Ryu's attacks (e.g., neutral attack) change depending on his distance from opponent(s).

Several of Ryu's attacks have nicknames: held forward tilt is Collarbone Breaker; tapped and held down tilts are Light Ankle Kick and Heavy Angle Kick, respectively; forward smash is Joudan Sokutogeri; forward aerial is Tobigeri; up aerial is Sukui Tsuki; down aerial is Straight Punch; back throw is Somersault Throw; and up throw is Heel Drop.

Hadoken in Super Smash Bros. for Wii U

Hadoken (波動拳, sometimes spelled Hadouken) is a trademark move appearing throughout the Street Fighter series, appearing as Ryu's standard special move. When used, Ryu thrusts his hands forward and launches a fireball across the screen; the exact speed, distance, and damage of the attack depends on how long the player holds down the button. Ryu can only launch one Hadoken at a time.

By inputting the Street Fighter command for the Hadoken (down, down-forward, forward + any attack button), the player can launch a slightly larger and stronger Hadoken, though the speed at which it travels does not change. In addition, by inputting the command for Dhalsim's Yoga Flame move (tilt the control stick in a full semicircle rather than a quarter circle), the player can perform a Shakunetsu Hadoken (灼熱波動拳), which launches a red fireball that deals multiple hits of fire damage and explodes at the end, though the distance is once again unchanged. 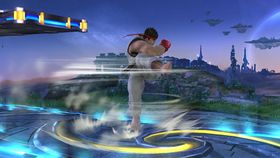 The Tatsumaki Senpukyaku in Super Smash Bros. for Wii U

Tatsumaki Senpukyaku (竜巻旋風脚, shortened to Tatsumaki and sometimes referred to as Hurricane Kick) is one of Ryu's signature moves debuting in the original Street Fighter that appears as his side special move. Ryu performs a spinning kick, moving forward and a whirlwind surrounding his body. He spins only once if the special attack button is pressed and three times for up to three hits with increased power if the button is held. The Tatsumaki stops moving, but still kicks if Ryu reaches a ledge. The move can also be used in the air, slowing Ryu's descent. By inputting the original Street Fighter inputs (down, down-back, back + any attack button), the move strengthens and travels farther. 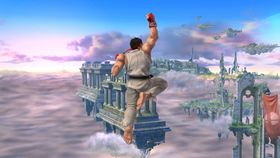 Shoryuken in Super Smash Bros. for Wii U

Shoryuken (昇龍拳) is one of Ryu's original special moves from the Street Fighter series appearing as his up special move. Ryu leaps into the air with an uppercut attack, dealing a single strike to any opponents in his path, though he is left helpless afterward. The damage dealt and height given the by the move are greater if the player holds down the button rather than just pressing it. If the player inputs the original Street Fighter controls for the Shoryuken (forward, down, down-forward + any attack button), the player can perform a stronger Shoryuken that makes Ryu invincible for the duration of the move and has no landing lag. 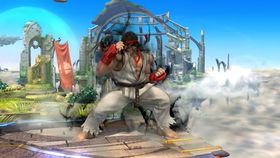 Focus Attack in Super Smash Bros. for Wii U

Focus Attack (セービングアタック Sēbingu Atakku, "Saving Attack") is a move introduced in Street Fighter IV that every character in that game can use, which appears as Ryu's down special move. Ryu charges up a punch for as long as the special attack button is held down, ink surrounding him. Ryu is also given super armor for the duration of the attack, though it will only protect against one hit. A fully charged Focus Attack will briefly stun opponents that are hit. The player can also cancel the attack by double-tapping the control stick. In addition, by tilting the control stick in the other direction while charging, the player can reverse the direction of the attack. 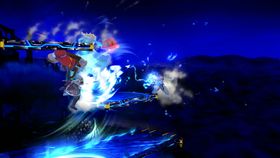 The Shinku Hadoken in Super Smash Bros. for Wii U

Shinku Hadoken (真空波動拳) is one of the variants for Ryu's Final Smash, originally debuting as a Super Combo in Super Street Fighter II Turbo. This version of the Final Smash appears if used when there are no opponents directly in front of Ryu. Ryu fires off a larger Hadoken that has a vacuum effect on opponents, dealing multiple hits before knocking them away once it dissipates. The Shinku Hadoken is also capable of traveling through the stage. If the Final Smash is activated when Ryu is next to an opponent, the Final Smash becomes the Shin Shoryuken instead. 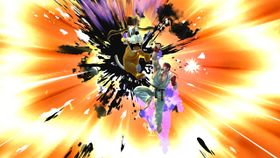 Shin Shoryuken in Super Smash Bros. for Wii U

Shin Shoryuken (真・昇龍拳) is a move from the Street Fighter series debuting as Ryu's second Super Art in Street Fighter III: New Generation, and appears as one of his two Final Smash attacks. This attack is used when the player uses Ryu's Final Smash with an opponent directly in front of him. Ryu traps opponents with a flash of light and deals three punches ending with a Shoryuken that deals more damage and knockback than his other Final Smash attack, the Shinku Hadoken. If there are no opponents directly in front of Ryu, then the Final Smash becomes the Shinku Hadoken instead.

Ryu coverage on other NIWA wikis: