From the Super Mario Wiki, the Mario encyclopedia
(Redirected from Dark Pit Staff)
Jump to navigationJump to search

Dark Pit (sometimes called Pittoo by Pit and Palutena) is an imperfect, opposite clone of Pit created after the destruction of the Mirror of Truth, in the events of Kid Icarus: Uprising. He serves as an anti-hero, being somewhat of a rival to Pit. Compared to Pit's, his personality is more serious and aggressive, rejecting the idea of being a servant to anyone. His appearance is identical to Pit's, except with the dark coloring to his clothing, wings and hair. His character was most likely based off the "fallen angel" coloration of Pit in Super Smash Bros. Brawl, as both Kid Icarus: Uprising and Super Smash Bros. Brawl were made by Sora Ltd. 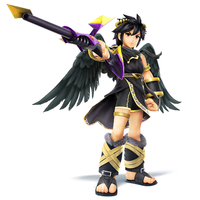 Dark Pit makes an appearance as an unlockable fighter in Super Smash Bros. for Nintendo 3DS and Super Smash Bros. for Wii U. In Super Smash Bros. for Nintendo 3DS, Dark Pit can be unlocked by playing 50 Smash matches or clearing Classic with three different characters and then defeating him on Reset Bomb Forest, while in Super Smash Bros. for Wii U, he is unlocked by playing 40 matches or clearing All-Star on Normal difficulty, then defeating him on Palutena's Temple. He was originally planned to be an alternate costume for Pit, but was made a full character after he began to receive balancing differences to give him distinct records[1]; Masahiro Sakurai also thought it would be odd for him to wield the Three Sacred Treasures, and the team had already modeled the Electroshock Arm[2]. Dark Pit is the only newcomer who did not have a reveal trailer; his inclusion in the game was instead hinted at the end of Palutena's trailer. Like in Kid Icarus: Uprising, Dark Pit shares his voice actors with Pit, who also reprise their roles for this game: Antony Del Rio in English and Minami Takayama in Japanese.

Dark Pit's moves are similar to Pit's, but there are a handful of noticeable differences. His standard special is the Silver Bow, which lets him fire a controllable arrow like Pit's Palutena Bow, and his side special is the Electroshock Arm, which lets him charge forward and uppercut opponents with an electric attack. His up and down special moves, Power of Flight and Guardian Orbitars respectively, are identical to Pit's moves; the former gives Dark Pit a quick burst of flight, while the latter lets Dark Pit defend himself with a pair of shields. His Final Smash is the Dark Pit Staff, in which he fires the staff to deal high damage and knockback to opponents.

Dark Pit has average weight, being heavier than Robin, Roy, and Pac-Man, lighter than Luigi, Villager and a lightest possible Mii Fighter, while weighing the same as Pit and Wii Fit Trainer.

Dark Pit has a distinct victory theme from the other Kid Icarus characters, being a brief excerpt of Dark Pit's Theme from Kid Icarus: Uprising. He also has a special victory quote that sometimes plays if Pit is in the match.

Dark Pit returns in Super Smash Bros. Ultimate as an unlockable playable character. This time, he is classified as an Echo Fighter based on Pit. Dark Pit can be unlocked by playing VS. mode matches, being the 54th character unlocked. Dark Pit can also be unlocked in Classic Mode through Samus's unlocking tree, or joining the player's party in Adventure Mode: World of Light. 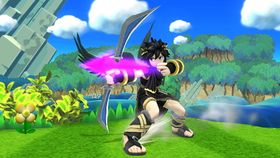 Dark Pit using the Silver Bow in Super Smash Bros. for Wii U

The Silver Bow is a weapon introduced in Kid Icarus: Uprising as a prototype to the Palutena Bow and Dark Pit's signature weapon, also used as Dark Pit's standard special move. Dark Pit shoots a dark arrow from the bow that can be charged by holding down the button, and aimed in one of three directions (left, right, and up) while charging. Compared to Pit's Palutena Bow, the arrow does not travel as far and cannot be controlled as well, but it deals more damage.

Like the Palutena Bow, the custom variations for this move in Super Smash Bros. for Nintendo 3DS and Super Smash Bros. for Wii U are the Piercing Bow and Guiding Bow (named Bow of Piercing and Bow of Guidance in the PAL version, respectively). Piercing Bow takes longer to charge and the arrow takes longer to control, but the arrow deals more damage and can travel through opponents. Guiding Bow allows greater control over the arrow as it travels, but the shots move slower and do not deal as much damage. 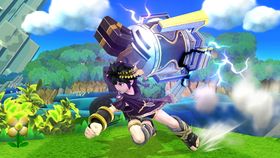 The Electroshock Arm in Super Smash Bros. for Wii U

The Electroshock Arm is an Arm weapon introduced in Kid Icarus: Uprising and Dark Pit's side special move. Like with Pit's Upperdash Arm, Dark Pit dashes forward with the Electroshock Arm and uppercuts any opponents in his path, though the attack deals electrical damage and launches opponents at an angle rather than directly up.

In Super Smash Bros. for Nintendo 3DS / Wii U, the first custom variant for this move is Electrocut Arm, which does not cause Dark Pit to dash, and instead causes him to ready himself and uppercut opponents when they approach. The second is Quickshock Arm, which causes Dark Pit to quickly dash forward as well as continue dashing even after damaging opponents, but reduces the distance of the dash. 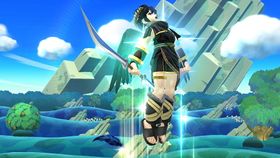 Dark Pit using the Power of Flight in Super Smash Bros. for Wii U

The Power of Flight is Dark Pit's up special move, shared with Pit. It is based upon the limited flight power granted to Pit by Palutena in Kid Icarus: Uprising for the game's flight combat sections, except Dark Pit's is granted by Viridi instead. When used, Dark Pit briefly charges up and takes off in the direction the player holds the stick in a quick burst of movement.

Dark Pit and Pit also share custom variations of this move in Super Smash Bros. for Nintendo 3DS / Wii U. The first is Striking Flight, which deals slightly more knockback and damage than Pit upon take-off, but can only be used to move at a slight left or right angle. The second variation is Breezy Flight, which does not send Dark Pit as high as the regular move, but is faster to execute and creates a whirlwind when taking off that pushes away opponents. 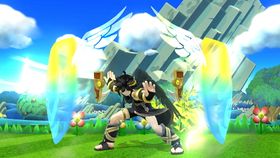 Dark Pit using the Guardian Orbitars in Super Smash Bros. for Wii U

The Guardian Orbitars are weapons in the Orbitar weapon class in Kid Icarus: Uprising, appearing as Dark Pit's (as well as Pit's) down special move. Dark Pit summons the Guardian Orbitars to project a pair of shields around both sides of himself that can block attacks from both sides. They also push away opponents upon use, and remain active for a limited time as long as the player holds down the special move button, or automatically after a few seconds. If the shields are attacked enough, however, they shatter, preventing the player from using them for a time.

Dark Pit and Pit also share this move's custom variations in Super Smash Bros. for Nintendo 3DS / Wii U. The first is Impact Orbitars, which makes the move a proper attack at the cost of defending Dark Pit. The second is Amplifying Orbitars, which increases the power of reflected projectile attacks but makes the Orbitars weaker. 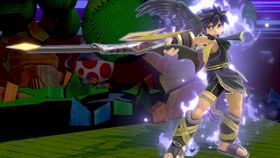 The Dark Pit Staff is a Staff weapon based upon Dark Pit and introduced in Kid Icarus: Uprising, which appears as Dark Pit's Final Smash. Similar to Zelda's and Sheik's Light Arrow, Dark Pit pulls out the staff and fires a beam of dark energy in the direction he is facing, damaging and launching opponents caught in the beam. The blast goes through opponents' shields as well as any walls or obstacles. Opponents closer to Dark Pit take more damage and are launched farther than those further away.

Dark Pit can be unlocked as a Costume Mario costume in Super Mario Maker. His sprite is identical to Pit's sprite, but using Dark Pit's colors. While the transformation and jump sounds as well as the course clear song are taken from the Famicom Disk System of Kid Icarus, his death song is taken from the game over theme of Kid Icarus: Uprising.