From the Super Mario Wiki, the Mario encyclopedia
(Redirected from Shroob Castle Cellar)
Jump to navigationJump to search 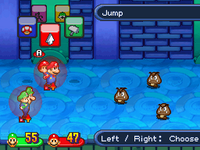 A battle in Peach's Castle Dungeon

Peach's Castle Dungeon (Peach's Castle Cellar in the British English version) is an area from Mario & Luigi: Partners in Time. It can be accessed after Mario, Luigi, Baby Mario, and Baby Luigi defeat Sunnycide, and the adults learn the Bros. Ball move. By using the move to turn a gear on the left side of Peach's Castle, a blue Warp Pipe will rise from the ground, taking the four into the dungeon. It is notably the only area in the present time where normal enemies are fought.

When entering the area for the first time, the brothers notice Fawful from across the center room, and witness him enter a pipe blocked by a grate in the rightmost room. The babies can use the Baby Drill to enter these pipes, which also contain 100 Coins in ? Blocks. By navigating through the pipes in the center room, the babies can find Fawful's Bean 'n' Badge, where they are able to trade beans for badges.

The only enemies in the present version of Peach's Castle Dungeon are Goombas. There are also two time holes in the dungeon; the first one leads to Toad Town, and the second, which is only available after defeating the Elder Shrooboid, leads to the Star Shrine. 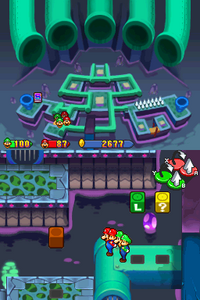 The area also appears in the past version of Peach's Castle under the name Peach's Castle Cellar (Past), with a substantially different layout but identical music. Here, the adults and babies must battle a Chomp to retrieve the ! Block it had eaten. By damaging it with Laser Blocks, they can use that ! Block to retract nearby spikes, allowing them to progress.

While no Goombas are present, Shroob Rexes, Shroobsworths and Intern Shroobs, Ghoul Guys, and Lethal Bob-ombs can be fought in this version of the dungeon. The latter can only be encountered by the babies alone.