From the Super Mario Wiki, the Mario encyclopedia
< The 'Shroom:Issue 135
Jump to:navigation, search 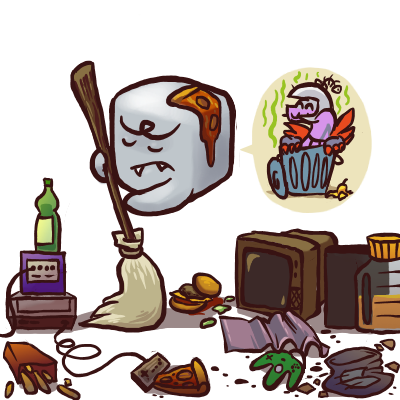 Hello, 'Shroom readers! You know who I clearly am not? TPG. That's okay, though, because I can still bring you Pipe Plaza. And really, isn't that the most important thing of all?

No Poll Committee Discussion this month, by the way.

Hello, readers! LudwigVon here, with another edition of New Articles. As usual, it is an up to date about all the new articles created within the past month. By the way, if you want to create new articles on the Super Mario Wiki, the Manual of Style and Good writing gives you several information in order to help you in the process.

Without further ado, here is the list of all articles created from May 13th to June 7th.

“Time to turn over a new leaf and try not murdering everyone for once.”
—Fun With Despair (Talk Page · Forum Profile)

Can you believe it is already June? I know I can't! But it does mean that is is time for a new Anniversary Announcements!

The polls open shortly after this paper is released! You can then vote on your favourite and least favourite things in the Mario series. View the polls here!
Remember, you can vote once a week, so if you can't decide on your favourite, vote on multiple options by waiting a week in between.

"But you finished these last month!" And you are correct! But Alex95 sharply noted an inconsistency which has been fixed and needs to be covered! It is shown in the table below.

Welcome to Committee Interviews! In this part of Anniversary Announcements, I will do short interviews with the members of the Awards Committee, so you can get to know them a bit better!
This month: MrConcreteDonkey, GBAToad and Stargazing!

Everyone has their own ways of dealing with ghosts, and this diversity is nice to see in the committee.

And that was Anniversary Announcements for this month! Join back in next month, when life has given us some more Awards-flavoured lemons for some nice lemonade. ¡Adios!

Greetings everyone! I'm Alex95 and welcome back to Upcoming Game! It's the month of Weegee here in The 'Shroom, and there's a couple of upcoming games that concern the green plumber. One of which is a remake of his first major standalone starring role, Luigi's Mansion for the Nintendo 3DS! The other title is Mario & Luigi: Bowser's Inside Story + Bowser Jr.'s Journey, which I'll cover later, maybe if we have a "Bowser Month" before its release. Anyway, enough dilly-dallying, it's time to step into the original haunted mansion once again!

The addition of the bottom screen should make navigation much easier.

For those of you that haven't played or seen the original Luigi's Mansion, shame on you here's a quick rundown. The original game released on the Nintendo GameCube as one of its launch titles back in November of 2001. … Er, sorry, felt old for a moment. Uh, the game centers around Luigi as he apparently wins a mansion in a contest he didn't enter. Thinking nothing of it, he invited his brother, Mario, to meet him there, but when he arrives, Mario is nowhere to be found, likely further on ahead. The mansion is dark and spooky, but Luigi wants to know what happened to his brother, so he gathers his courage and moves on. He soon encounters Professor Elvin Gadd, a ghost researcher who resides in his lab close by. Yep, ghost researcher. Turns out, this mansion is haunted by ghosts! After fleeing from an attack, E. Gadd brings Luigi up to speed on what's happening and learns that Mario is missing! What's more, that mansion apparently only just appeared a few nights ago, out of the ether. So now, not only does Luigi have to find his brother, he has to figure out the mysteries this mansion holds.

E. Gadd had some renovation done to his lab.

Luigi soon finds that there are more powerful ghosts residing in the mansion. Apparently, E. Gadd had captured these ghosts and trapped them in portraits to display in his Gallery. Someone let these ghosts loose, becoming the mansion's bosses. The story and mansion layout appears to be the same in the 3DS remake, though it remains to be seen if there are any additional ghosts added. As Luigi progresses through the mansion, he finds a group of Boos, lead by the then-newly-introduced King Boo. The original game had 50 of them, not including King Boo, one for each room. If the mansion gains new rooms in the remake, it's possible there will be additional Boos added as well.

Summon your courage and test your might in the brand new Boss Rush mode!

…Okay, so that wasn't a quick rundown, but that's about everything important without spoiling too much. From footage seen so far, almost everything appears to be the same as in the original game. Almost. The visuals are more along the lines of the sequel Luigi's Mansion: Dark Moon, which was released for the Nintendo 3DS back in 2013, with Luigi and the Boos appearing to use their assets from that game. The graphics are updated, the controls are changed, and the game is now displayed in stereoscopic 3D. The map and inventory are displayed on the bottom screen, making navigation easier. Of all the rooms shown off for the remake, the only one that appears completely different is E. Gadd's Gallery. Other rooms have some more details added to them, but that's so far the only room we know of that has a different layout altogether.

The 3DS remake is being co-developed by Grezzo, the same company that worked on the 3DS remakes of The Legend of Zeldas: Ocarina of Time and Majora's Mask. Grezzo did a fantastic job with those remakes, and their work already shows with Luigi's Mansion 3D. Introduced in this remake is a new Boss Rush mode, similar to the one in Ocarina of Time 3D, where you have to fight through all of the mansion's bosses and try to get a good time. The mansion is brighter, the interface is better, and I can tell Grezzo is doing a good job with this remake already.

The original Luigi's Mansion was already a great game, and the 3DS remake looks to make it even better. I'm got the same chills I did when I first saw Ocarina of Time 3D! Ocarina of Time 3D also included a mirrored Master Mode, so I'm curious if they'll include the PAL region's mirror Hidden Mansion mode from the original game, which didn't get put in any other version. In the midst of all these Wii U to Nintendo Switch ports, it's nice to see some earlier titles get the remake treatment they deserve. The 3DS is a good choice to put the game on, as it was originally designed with 3D in mind (you can learn more about that in this month's Could Have Been section). I still have the original game, but I'm definitely going to try to pick this up… whenever that will be. The game is currently only set for a "2018" release, the exact date unknown. But the game will be back…and we'll be waiting.

Hello, 'Shroom readers! For this month of the interview we're going back to the past in a relative sense, without actually doing so. I'm interviewing someone who has been around a long time compared to the rest of my choices this year, that being none other than 2257. As a very longstanding member of the community, he's been around the block quite a while and has spent a lot of time in the wiki and the forum alike. Primarily the former at first, though. So, without further ado, it's on with the interview!

The only thing that got done from the last month was I added an image on Icaruspedia's Information Center. And that wasn't even what was requested, so I guess that means absolutely nothing got done in the last month. Come on, now.

I ask that any additions that could be made to the Donkey Kong Wiki be made to the Super Mario Wiki instead, where possible, as per this discussion. And remember to follow the wiki policies when adding content!

This time I want to look at a section that is almost timely. E3 has just been and gone, and as such many upcoming games were announced. I'm sure you can see where I'm going with this one. This time, we'll be taking a look at one of The 'Shroom's most popular sections, Upcoming Games. Over the years, this section has had a multitude of writers, including Alex95 (talk), who currently writes the section and Crocodile Dippy (talk) a former Core Staff member. Another former member of the Core Staff who wrote this section, was Paper Pikachu, our former Art & Music – better known as Palette Swap today – director. Now, even though our theme for this month is Luigi, and E3 didn't give us any big 3D Mario game, the game that Paper Pikachu is a big 3D Mario game, and doesn't feature much of Luigi. But let's not have me spoil it, let's just enjoy it.


Hi, ‘Shroom readers! It’s your Statistics Manager, LudwigVon, with another edition of The 'Shroom Report.