You have just found your friendly Yoshi Egg. 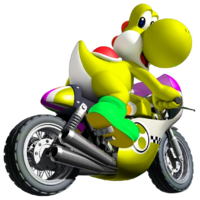 Hi! I'm YoshiEgg1990, or Yoshi Egg, and a pretty active contributor in this wiki. I'm a big Yoshi fan and my favorite Yoshi is the blue one! English is not my first language, so i'm really sorry for any grammar or spelling mistakes.

Unlike many other Mario fans, i didn't played Mario games when i was child. I grew up not knowing much about Mario, apart for the fact that he is a video game chracter. However, many years later, when i was bored, i found myself playing Mario fangames on the internet. they were really fun, and i decided i want a official Mario game, and i quickly got some Mario games. On some point, i was interested in getting Mario Sports Mix, but when i found out it's a crossover between Mario and Final Fantasty, i lost interest. However, the reserach on Mario Sports Mix brought me to this amazing wiki, and i decided to stay here as a contributor!

The Yoshis became my favorite chracters from the first moment i saw them because they are very cute. I really love to watch Youtube videos about Mario games, so i know a lot of information on Mario games that i don't own. However, i have a few more main interests than Mario; Some of these include the Cars Franchise and Sonic.

This is my friend userbox. Don't forget to ask me first! |-