From the Super Mario Wiki, the Mario encyclopedia
Jump to navigationJump to search
Status: I have now become an inactive user. Meaning I will not be on the wiki. Anymore. At all. I may get back on the forum sometime in the future, but probably not. 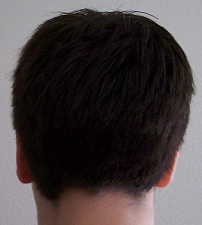 What my parents see all day.

Welcome, weary travelers, to my well-known and well-traversed talkpage. But don't get comfy just yet; first we have to lay down some rules:

All content on this page and on my userpage is 100% copyright free. You can copy any of it; no credit needed. Just tell people you got it from me. ;) That about wraps it up, get posting!

Stooben: Still on? What d'ya wanna talk about?

Blitzwing: Hokey dokey. For now, can you send me some more awfully (funny) links? :D

3D, it's good to have friends.

Still on? I'm always on. I'm a psycho with a knife no life.

So, how've you been? Are you excited about the holidays? I know I can't wait for my mom's turkey. :) I also got a Pogeymanz ROM; it's really awesome. Thanks for suggesting them to me. I can't wait for you to return to full activity again; I've become more active on the MW Forums, so odds are that I would run into you. Also, have you gotten the chance to play Brawl lately? I know your parents don't let you play games, but I thought you may have played it at a friend's house or something. ...Anyway, I just unlocked Sonic, and he is pretty cool! He's not worth the hype he got though. — Stooben Rooben 17:31, 12 November 2008 (EST)

Time for me to reply!

To Stooben Rooben: About your DS being reserviced; I once dropped... my DS Lite... in a toilet.

It broke from water damage, and we sent it back to "P"intendo. It took a month to get it back... gar.

I've completed Pokemon FireRed, Crystal, and Emerald... now I'm waiting for Platinum to come out so I can play that as a ROM. I could download Pearl or Diamond, but I'd rather wait for Platinum so I can catch the Legendary Birds. :) (Yes, it's possible to get DS ROMs... I wanna play Pokemon Ranger! D:) Which ROM are you playing?

Lawl yes I have played Brawl. My cousins came over two months ago and brought a Wii; I bashed the crap out of Subspace Emmisary's Very Hard mode. WHEEE!

Sonic is way ovverated. Pit and Meta Knight are mah mains; they can fly (always good to have) and have amazing, super quick, incredibly damaging moves. When I get to my cousin's in two weeks maybe we can Wi-Fi... whaddya say?!

To Blitzwing: WHOA. Those are some CRAPPY fanfictions. I don't really think that I even think of anything that crappy. I can make a parody... but not a crap-ody.

I'll try to knock out a parody of like the Lost Adventures or something and send it to ya.

By the way, can you give me a rough list of all the users that are still active?

And send me more dumb links! I am in need of hilarity!

3D, ninja cyborg zombie mongooses weilding cucumbers have kidnapped the president! Will you, Mr. GenericAnimeCoolGuyWithASpikyHairdo save him?! YOU DECIDE!

Jorge: Got back in the Groove recently.

Lil'Boo and his obvious sockpuppets: Retired after DP gave him a warning on the old Userpedia.

Knife: He popped in chat here once to say that he was almost killed by Hurricane Ike. We never saw him again.

Crap. I kinda liked them.

Yay, Uniju and Snack. Are they on the Phorum?

Good for Jorge. I'll send him a message once I get on mah Lappy. This office computer I'm using sucks.

WarioLoaf is gone? Doh. I wonder if he's still on Wookiepedia...

Also, is DP still here? I need to ask him some PokeQuestions. :D

Oh, and WATCH OUT, GUYS! I'm archiving, so copy your edits before trying to save the page. :)'

DP's still on the chat. And Uniju & Snack are only on the forum.

About the whole Lil'Boo sockpuppeting deal: He never admitted it, but it was pretty fraking obvious. --Blitzwing 18:00, 12 November 2008 (EST)

My dad's computer doesn't have Java! How bleeping awful is that?!

Are The Missing Link, Plumber, Master Crash (and bros) still around? And are PaperStriker, Moogle/Guliant and Dodoman still on the forum?

Thanks for answering questions. :D

Oooh! And do you have a link to the worst Userpedia fanfiction EVER?! If you do, send me it. I wanna see users represented in non-usorial situations.

Plumber; He changed his name to "Daniel Webster" and all but dissapeared. Bean still come on though.

PaperStriker: He has dissapearing sprout. Currently, he hasn't been on the MW forum for a month.

Dodoman: He occasionally come here, but he's not on the forum.

Master Crash: He's on the UP forum. All of his bro are gone though.

You dropped your DS...in the toilet? That's freaky. I'd flip if something like that happened to my DS. ...I don't think I'd have the guts to actually pull it out of the toilet. Hooray for germophobia. XP

Awesome, you've beat a lot of them! :o I downloaded FireRed. It's pretty awesome so far. I plan to get Crystal next. Yeah, I once had an NSMB ROM, but I couldn't get it to save. D:

Awesome! I haven't beat SSE yet, but I plan to someday. :)

Definitely. Meta Knight, Kirby, and Fox are probably my best Brawlers as of now. Especially Meta; he kicks ass...ignments. :P Sure! Once I get my wi-fi working again, I'd be more than happy to brawl with ya. :) — Stooben Rooben 18:27, 12 November 2008 (EST)

You cannot save your game (in the actual game) using a FireRed ROM. Unfortunately, after beating the final boss, the ROM resets and tries to save the game. Since it can't save, it will delete your data.

This is how to complete the game without defeating the final boss and having all your data deleted:

Once you're at the Indigo Plateau (the final area of the game), click the Cheats tab, click GameShark, and copy these codes into the CODE area:

Once that's entered, click OK and close the cheats window. Back in the game, walk through a door. Any door. This'll active the cheat and give you the National Pokedex. Since the National Pokedex is obtained after you beat the Elite Four (the final bosses), the game thinks you already beat them and opens up the final areas of the game. Look in the walkthrough I gave you to find out that to do next!

Watch out, though: I suggest creating a backup save file before trying the code, as it may corrupt your default file. You do know how to backup, right? When saving your game, just add a "2" to the end of the file name. It'll make a clone of your currently saved game!

Whew! That was hard to explain. Any questions, Stooben?

I gotta go soon, guys. Hopefully, next time I come on I'll be using my laptop, which can access chat and edit your talk pages. I hope I'll be on again soon! Send me some messages before I go! :)

Oh, and Stooben, where, exactly, are you at in FireRed? Are you past Mount Moon? Have you fought Snorlax? What's you name your Rival? (His official name is Gary...)

Your computer crashed? D: That sucks...and on your only day. ;_; Well, at least you had your ROMs backed up. Huh? Oh! *reads above comment* Mkay, thanks! I haven't had any of those problems though...and I just realized why: I got a ROM called Pokemon RubyRed. x_x Darn it. I'll download the right ROM. Anyway, how are you today? — Stooben Rooben 18:28, 18 November 2008 (EST)

I Hope Your Weeks Get Better[edit]

It really sounds like you're having a hard time. :(

(Also, I'm starting to lose track of which messages I reply to. DX I need to archive more often. So, sorry for the late reply.)

Well, if it's anything like my comp, it crashes from having too many programs open. "More memory, faster capabilities!" MY ASS. ...Well, if you need help with some ROMs, I'll supply you with links.

Lol, I'd love to see that. Where teh link?

Thanks! I'm gonna redownload VBA too, just in case it got corrupted somehow. So, I'll just keep editing and talking with you (:D) until its downloaded. — Stooben Rooben 18:52, 28 November 2008 (EST)

True that. They'd probably be my second favorite. :D Lol, your rivals name is similar to mine. I named him "Jackass", lolwtf.

Aw, okay. I was gonna make you a mod too, because you're the UBER when it comes to forums. Yeah, Sos is a fast replier. :O

Yeah, they seemed like the best choices to me. :P My favorite legendary Pokemon? Is that like a really famous one? (Like Pikachu, Charmander, Rayquaza, etc.)? I'm still a Poken00b. — Stooben Rooben 20:17, 28 November 2008 (EST)

YESS! YESSSSSSS! I HAVE MORE USERBOXES THAN YOU OR ANYONE ELSE ON THE WIKI! YEEEEEEEESSSSSSSSS! 105 USERBOXES! Caution! Your Buddy Bill was [[{{{2}}}|here!]]

Whats wrong with petey piranha, anyhow? Did he eat you?

I know I'm stopping by really late, and that you'll likely never see this, but I just wanted to say goodbye. You were a great friend and helped me become a great user on the site. Many people looked up to you and admired your kindness. (As well as your silliness.) I hope life treats you well, dude. Stay loony! — Stooben Rooben 23:40, 16 March 2009 (EDT)

I WISH WE COULD HAVE TALKED SOONER!!!! YOU WERE A GIFTED USER, HOPE YOU LIFE IS BETTER THAN MINE!!!!HOPE YOU AREN'T INFECTED BY THE SWINE FLU!!!! I KNEW YOU FOUR YEARS BEFORE I LOGGED IN, I WENT ON THIS WIKI FOR A LONG TIME AND I KNEW YOU ALL THIS TIME!!!! YOU WERE AN AWESOME FRIEND, THAT WAS ALSO THE FUNNEST WACKIEST FRIEND I EVER KNEW ABOUT EVER!!! BYE!!!!4DJONG 17:45, 29 April 2009 (EDT)

You have been cordially invited to participate as a special guest writer in the Special Issue of The 'Shroom conmemorating the 30th Issue.

You were chosen by the public to participate, so it would be great to have you in our staff for this issue. If you would like to participate, plase tell me so, you can write any section of your liking, or write about anything you want. You will recieve further information, such as the issue date.

Have a nice day.

Hey 3Dejong! I know you are a inactive user but, if you are reading this please give me your friend userbox. Here's mine. |-

3Dejong, I hate Ballot Box Bunny! It is my least favortie cartoon! I especially hate the part when Bugs has his left foot shot a hole after Sam shoots at Bugs' "jukeybox!" User:PBSLover

Smiddle, if you're trying to discourage us from doing drugs, you're doing a horrible job. I mean, I can't get enough of this guy! I come here all the time to get a few hundred laughs!

CatJedi check this out my own wiki-> http://whiskerpedia.wikia.com/wiki/Whiskerpedia_Wiki i made a userbox 4 u about it |-

i also carried the message tradition on! youl see :

CatJedi's been here...... told u there would be a comment!