I LOVE this place.Mada Mada Dane

Meh. You can have your modern articles, just don't leave.Mada Mada Dane

Wayoshi is a Beaucrat! And you're a nominee for sysop! Plumber

Hey I got some bad news for you. Gofer oppose you for sysop.F g

Like that'll matter, lots of people will probably vote for him. Plumber

Hey 3d i was trying to defend you.and you don't care?WAAAAAHHHHHH!!!!!F g

nothing... It's boring around here without you. Max2 (talk)

wanna chat at the forum?F g

I boosted your sig idea to make mine awesome! Max2 (talk)

May or may not know, but max2 is RETIRING from this wiki on the 24th. :( Say you'r final goodbyes. Full Metal Moogle

I'm not staying, Wayoshi's kicking me out. Max2 sorry. If you come on UnMarioWiki, we could chat sometime.

Wayoshi is not kicking him out. -- Son of Suns

Come to UnMarioWiki! (link is on main page talk) I run the Comic Convention, there's an article on Super mario Saves Breakfast, and more, COME ON!!! Max2you know you want to...

Whoa, i didn't know you were a luigi fan,

Hey 3d the website you gave to Plumber how does it work? Pics I can't get it to work :(

I've created a Yoshipedia. Can anyone help me to make this pedia cleared? Thank you!

Go to http://requests.wikia.com/wiki/Simpsons_Wiki and edit the paragraph SUPPORT and put your Mario Wiki name.

Let me guess: school work is being ignored because of the Internet, and the parents are taking charge.

And oh yeah, get in the chat! Wa

What do you mean by bye everyone? Full Metal Moogle

Man thats funny what you did to your page! but isn't april fools day tomorow or am i wrong?

Yeah, that inspired me to do an early April Fool's thing too.... Yeah, that's my old sprite that you don't see often anymore

I wasn't in the april fools day.

Thank's for the recipie man, that's like, the only sandwich I ever eat these days. Thanks. - Hyper Mushroom, Add more cheese! Mabye some ham!

My next story (if I finish it in time) will come out tomorw or friday.

wait a sec, i got somethin for you.

Happy birthday from me too, only... without a cool image... 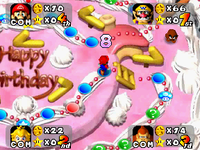 Let's pretend you're Toad; it looks more like he's the one having the birthday.

have you heard of those special christmas cokes?

i have also heard of greenbean cassarole.

I'm sure I've seen some waffle shaped, cheese flavored potato chips like, 6 years ago... - Hyper Mushroom, will potato chips do?

Is there anything you're NOT doing right now because it's your birthday? - Hyper Mushroom, you're standing on your head aren't you?

Already read it. Have you read the one where the cheese explodes aboard a ship? I didn't understand what was going on 'cause it was all in french... - Hyper Mushroom, running out of things to say in his sig and proud of it!

Is that the one where Obelix turns to stone, then goes back to childhood? - Hyper Mushroom, the copy button is the most covenient button on the keyboard

Is that the one with cleopatra? - Hyper Mushroom, tryin' to think of more intresting things to say...

(So what kinda cake did you eat?)