This article is about the Bomb in the Nintendo Comics System. For the Star Fox item in Super Smash Bros. Brawl, see Smart Bomb. 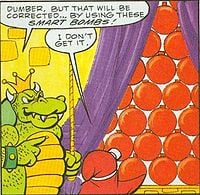 The Smart Bomb is an explosive that appears only in the Nintendo Comics System issue "Duh Stoopid Bomb!"

Smart Bombs appear as standard cartoon bombs, but they are red in color; they were created by the Koopa Troop to act as a countermeasure to the titular Stupid Bombs, likely done in the event the Stupid Bombs backfired on them. They release a gas that raises intelligence when detonated, signified by anyone caught in the gas suddenly wearing an Oxford cap.

Shortly after a Snifit reported to King Koopa that several of his Shyguys had set off Stupid Bombs and rendered themselves dunces, the King shows him a cache of Smart Bombs, explaining their purpose and his plan to counteract the Stupid Bombs affecting his soldiers. The curious Snifit grabs a Smart Bomb, which goes off in his hands, and breathes in the fumes; he becomes superintelligent, and sends King Koopa down to Fryguy Kindergarten before trying in vain to re-train the Shyguy soldiers.