From the Super Mario Wiki, the Mario encyclopedia
(Redirected from Surprise Wagon)
Jump to navigationJump to search 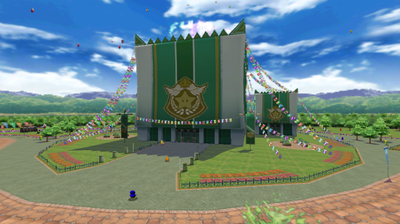 The Fun Bazaar is one of the many tents found in Mario Party 8. Here characters can spend the Carnival Cards that they have collected via playing through the Party Tent, Star Battle Arena, Minigame Tent, and Extras Zone.

The Records Board compiles all of the information on the player's best records on minigames, the player's score in Test for the Best and records of the high scores of the Nintendo staff members in certain minigames. Note that the scores of the Nintendo staff members will not be available for viewing until they are purchased from the Surprise Wagon for 50 Carnival Cards. 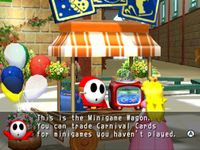 The Minigame Wagon is a place where the player can buy up to 64 minigames for 50 Carnival Cards each. After completing the Star Battle Arena mode, the Shy Guy merchant who runs the Minigame Wagon will return to work and the player will be free to buy any minigames they haven't unlocked yet. After the player has bought a minigame, or if it has already been unlocked, the words "SOLD OUT" will be printed diagonally across the minigame's picture. 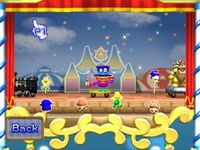 The carnival figures as seen in the Carnival Parade

The Carnival Wagon is an area resembling a mini stage that lets the player view all of the different carnival figures that they can purchase in the Surprise Wagon. When the player approaches the Carnival Wagon, they will be presented with two options: "Carnival Figures" or "Carnival Parade." If the player chooses "Carnival Figures," they will be able to view all the carnival figures they currently have lined up on a shelf. If they choose "Carnival Parade," they will see their carnival figures marching in a parade across the stage. When marching in a parade, each figure will appear in random order each time, and will perform an action of some kind when the player clicks on them (note that this will not happen if they are viewed on the shelf). Each figure can only be clicked on once each time the parade is started.

The Surprise Wagon sells various items, including Extras Zone minigames, staff records, music and sounds, taunting sounds, staff credits, and carnival figures. After the player has bought an item, the words "SOLD OUT" will be printed diagonally across the item's picture.

The Staff Credits booth will show all of the credits of the game to the player after it has been purchased at the Surprise Wagon for 100 Carnival Cards. MC Ballyhoo and Big Top will appear to the right of the Carnival Calliope and ask the player if they would like to see the credits.