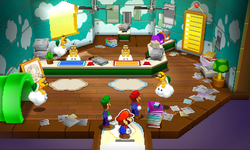 The interior of the Lakitu Info Center located in Sunbeam Plains

Many of these missions have alternate hard mode versions, and beating them gives the player Medals, with a certain number getting them an exclusive Battle Card. The missions are organized by location, and a full list can be found below.

Each Lakitu Info Center also contains a Warp Pipe leading to an arcade, where the player can participate in a variety of minigames based on previous boss battles, Bros. Attacks, Trio Attacks, and Papercraft battles, and purchase Lakitea.

Note that Bowser's Castle and Neo Bowser Castle are considered the same area as far as Lakitu Center missions go.