Bag a Bug (or Bag A Bug[1]) is one of the minigames in the Game Boy Advance version of Donkey Kong Country 2. It is hosted by Klubba at his Kiosk, as the third option from his menu.

Klubba allows the Kongs to play it for free on their first try, but subsequently charges them five Banana Coins to replay the mini-game. After Diddy or Dixie first play Bag a Bug, the player can replay it from the main menu's "Bonus Games" option. Selecting it opens a menu for the mini-game that simply shows Klubba outside his kiosk, with his usual animation of pounding his club on his hand. It also shows a list of high scores from the Kongs.

Bag a Bug takes place outside of Klubba's Kiosk, surrounded by a circular path, and all four ends have a small, circular corner that connects to the main pathway. The mini-game retains its swamp-based scenery in every world, regardless of its scenery. 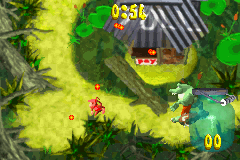 Either Diddy or Dixie play in Bag a Bug, which is decided based on whoever is the lead Kong. The player can only play as Diddy if the mini-game is selected from "Bonus Games". Their objective is to collect as many fireflies in a glass jar in under one minute while avoiding Klubba. He attempts to whack Diddy or Dixie with his cudgel. If the Kong gets hit, they either lose most or all of their collected fireflies.

Klubba moves around the stage faster as the timer ticks, and therefore it becomes harder for Diddy or Dixie to outrun him. The Kong can run into a circular corner while Klubba moves past them. An Invincibility Barrel occasionally appears on-stage, which temporarily makes the Kong invulnerable to Klubba. Diddy and Dixie win if either one collects enough fireflies, but lose if they do not collect enough (or lose too many from being hit by Klubba). Upon winning, Klubba rewards the Kongs with some common prizes, which improve based on their performance: Bananas, Banana Coins, or even an Extra Life Balloon.

Similar to other handheld remakes of the Donkey Kong Country trilogy, Bag a Bug has high scores if selected from "Bonus Games". It holds five high scores, which all appear to be from Kongs by default, except 25 from "DKC" (Donkey Kong Country). Each default score is a multiple of five, each score is five points lower than the one above it.

The player can enter their initials and supersede the other scores if they catch at least six or more fireflies (starting with the lowest ranker, Cranky Kong). The player's high score is ranked based on the number of fireflies caught.