From the Super Mario Wiki, the Mario encyclopedia
(Redirected from Hillside Cave)
Jump to navigationJump to search

“Say... Do you know anything about the Hillside Cave? I was hanging out near the entrance the other day... Suddenly, this weird-looking guy ran after me! I took off quick! I saw him bust the cave gate open and vanish inside. Yikes!”
—Pianta, Super Mario Sunshine 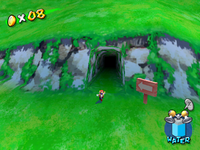 The entrance to the Hillside Cave

Starting in this episode, Seedy Pods and Pokeys appear in various areas of the level, with many of them appearing near the lake.

Upon entering the cave, Shadow Mario will appear and take FLUDD away from Mario, then Mario will be brought to an area filled with moving platforms. The first set of platforms move side-to-side and are needed to reach the higher stationary platform. Next is a series of moving and stationary platforms, with the moving ones each moving in a different way. After traversing these platforms is a long bridge with four large, spinning cubes that slide across the bridge. Taking care not to be pushed off, the player has to cross the bridge to the next group of platforms, which are spinning star-shaped ones. Jumping between these and making it to the end will reward the player with the Shine Sprite. If the player decides to collect 100 Coins in the Hillside Cave (by collecting close to 100 of them and collecting the 100th coin in the secret area), the 100 Coin Shine Sprite will appear on the platform just before the two spinning star platforms at the end of the level.