It has been suggested that this page be moved to Jungle Jam. (discuss) 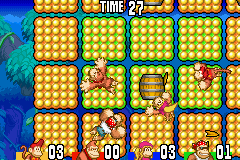 The Kongs competing in Barrel Blast 1.

The Jungle Jam Tournament[citation needed] (or simply Jungle Jam) is a tournament held in DK: King of Swing as the main event. It can be played with a single player or multiplayer. Completing a certain amount of challenges unlocks additional playable characters, such as Kremling. The Jungle Jam was originally planned earlier, though King K. Rool stole the medals to be given out to whoever won a race or battle. The tournament features a number of races, with bronze, silver, and gold medals being handed to the player based on the records, which are also shown on a record board.

Two events in the tournament are Attack Battle and Barrel Blast, in which the player chooses a character and battles three computer controlled characters. The objective of the game is to break the most barrels, and also hit other Kongs. Another one is a race, where the player chooses a character and needs to get to the top of the race first. There can be obstacles like barrels on a race, or it can be open where the player needs to climb on the pegs as fast as possible. These events are called Climbing Race and Obstacle Race. Another minigame, known as Color Capture, has the Kongs climb pegs to mark them a certain color. The player whose color appears the most at the end is victorious.