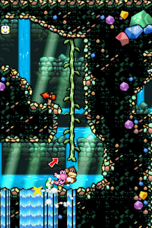 The DK Dash Attack is a move used in the game Yoshi's Island DS. While carrying Baby DK, pressing

by default) makes the baby ape perform a shoulder charge. The Dash Attack can be used to defeat almost any enemy in the game. For example, Baby DK can dash through several Pointies at one time. He can also smash open crates, which often contain stars. In a couple of levels, the DK Dash Attack is the only way to get over pits or one-way openings, as there is a ceiling straight above them, making jumping over them impossible.