From the Super Mario Wiki, the Mario encyclopedia
(Redirected from List of level themes)
Jump to navigationJump to search

This article is about the general overview of levels. For for a directory of every level, see Category:Levels and its subcategories. 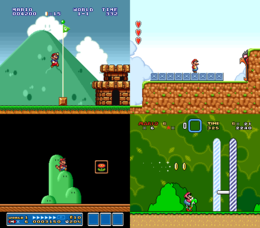 All platformers have multiple levels (also called courses or stages), which contain obstacles, enemies, items, and the like. Mario (or other characters) must pass through one level to get to the next and ultimately complete the game. In some cases, there are also levels that are hidden and need to be unlocked.

In the Mario franchise and its "cousin" series, such as Wario, Yoshi, and Donkey Kong, there are many different levels, each with different themes. Each theme appears in different games. Themes usually have different elements to challenge the player. Some levels are mixtures of themes, such as Perilous Pokey Cave in New Super Mario Bros. U being a desert-themed underground level. The theme of the level often depends on the world it is placed in. Although most level themes usually take place in the daytime, they can occasionally occur later in the day, such as Night Falls on Really Rolling Hills in Super Mario 3D World, a grassland-themed level taking place at night, or Spiky Mount Beanpole, also from Super Mario 3D World, taking place at sunset. Nighttime-themed levels are also a mechanic in Super Mario Maker 2.

This is a grassy world with hills, trees, and slopes. This is usually the easiest kind of level theme, as it is normally the first level or world theme encountered in each game. It is common for this level theme to introduce common level features and mechanics, such as jumping, breaking blocks, and new power-ups. Common enemies here include Goombas and Koopa Troopas. Bottomless pits are some of the more dangerous features in these levels. This level theme often has secret areas that lead to sky- or underground-themed locations. In 3D games, grassland levels offer more exploration and typically feature an easy boss battle.

This theme takes place in the sky, typically with many clouds and pipes. Common enemies here include Piranha Plants, Koopa Paratroopas or, occasionally, Lakitus, Flame Chomps, or cloud-based enemies. Mushroom Platforms are very common in these levels, as are auto-scroller segments. Sometimes, Mario has to ride a moving platform across the sky. This theme usually has fast-paced music.

This theme takes place in one of many towers, fortresses, or castles that the Koopa Troop built or conquered. They are typically encountered at the midpoint or end of a world, with Bowser's Castle normally being the last challenge the player must face. Towers are always vertical-scrolling, while castles and fortresses are usually horizontal-scrolling. Thwomps, Whomps, Dry Bones, lava, and Lava Bubbles are very common here. Castles are typically varied, featuring Snake Blocks, Spinners, Pendulum Platforms, or moving ledges. Bosses, including Bowser Jr., the Koopalings, and Boom Boom, are normally fought at the end of these levels. Castles and fortresses are typically the hardest genre of levels in the game, aside from post-game content. In the final castle, Bowser himself is fought.

This theme takes place in a desert and often features quicksand that slows down and sucks in the player, palm trees to jump on, and pyramid ruins. Tornados, Pokeys, and Lakitus with Spinies are common obstacles faced in these levels. Bottomless pits and blocks are also fairly common here. 3D games typically feature temples and caves for the player to explore.

This level theme takes place underwater, featuring many underwater enemies, such as Cheep Cheeps, Bloopers, eel enemies, and Urchins. Strong currents and auto-scrolling make navigating these levels difficult. The player is often given a limited air gauge in 3D games. This theme often overlaps with the underground theme. Auto-scrolling in the 2D games is common.

This level theme takes place on beaches or the coastline, with water submerging the bottom of the level. There are palm trees on the islands on top of the water. Unlike underwater levels, beach levels offer the option to travel above or below water. Crab enemies, Porcupuffers, and Urchins are common here. Sometimes, there are Cheep Cheeps that jump in and out of the water and Water Spouts. Beach levels are often found near underwater levels, and so the level themes often overlap.

This level theme features ghosts, such as Boos, Peepas, and Broozers. Pumpkin and spider enemies such as Splunkins and Scuttlebugs are also fairly common. This level type usually takes place in a Ghost House, often rife with ghosts, full of unusual objects such as fake doors and possessed objects. However, this theme can also take place in a spooky forest with dead trees or even underwater. These levels often feature maze-like navigation.

This level theme takes place in a jungle with poisonous swamp water, vines to swing from, and exotic enemies such as Wigglers, Piranha Plants, and Shy Guys. Forests and jungles may require the player to get across a swamp, such as riding Dorrie. In the New Super Mario Bros. series, Bramballs can be often found in this theme. Forest levels in 3D games often feature treetops that challenge the characters' jumping skills. In the Donkey Kong Country series, jungle levels typically serve as the beginner stages, similar to grassland levels in the Super Mario series.

This level theme features slippery ice that hinders the player's movement, as well as snow-themed enemies such as Snow Pokeys and Mr. Blizzards. Another common feature of these levels is icicles that fall from the ceiling, stopping the player from crossing safely. In 3D games, skating across ice is an option. Sometimes ice levels overlap with the jungle theme, such as in World 9-7 from New Super Mario Bros. Wii, or even the volcano theme, such as in Freezeflame Galaxy and Shiverburn Galaxy.

Mountain- and rock-themed levels typically feature Monty Moles, Bullet Bills, and Chain Chomps and have underground segments. Sometimes, it is required to climb on thin ledges on cliffsides to avoid falling to the player's death. Other common obstacles include bottomless pits, Bill Blasters, and Fire Bars. In 3D games, mountainous levels require exploration to reach the very top of the level.

Volcanic and lava-filled levels are typically later levels faced in the games. They feature lava and debris falling from the sky, and they often swarm with some of Bowser's stronger minions. Lava creatures such as Blarggs, Koopa Troopas, Hammer Bros., and Lava Bubbles are very common here. As lava levels are faced later in the series, they are generally the hardest levels in the game. The underground theme is a common overlap here. Bowser's castles are also full of lava.

The first level of the Space Zone from Super Mario Land 2: 6 Golden Coins

Space levels are rarer levels within the Mario series, as they rarely appear outside the Super Mario Galaxy games. Space levels often feature gravity that affects jumping and planets that pull the player in. Space levels have some of the most diverse enemy types in the games, as they are often combined with a different level theme, such as the sky theme.

These levels take place on a flying airship, usually built to accommodate some of Bowser's armies. Common enemies here include Rocky Wrenches, Cannons, Bullet Bills, Burners, and Mechakoopas. Bosses and allies of Bowser, including Bowser Jr., the Koopalings, and Boom Boom, are fought at the ends of these levels. Airships are normally auto-scrollers with many obstacles, and they are an alternative to castles and towers. Sometimes, the level is based on a different kind of automobile, such as tanks and military trains.

Escape from the factory! from Wario Land II

These levels take place in a metal fortress, factory, or foundry area, often featuring Warp Pipes, Conveyor Belts, electrical hazards, and robotic or metal enemies such as Goombeetles, Topmen, Chain Chomps, and Bullet Bills. They are often set in space and can overlap with the castle and airship theme. Factory levels are rare in the mainline Mario games, though they often appear in the Donkey Kong Country series.

These levels are composed primarily of giant-sized food, which acts as platforms for Mario to climb on or obstacles that get in Mario's way. Candy and sweets are the most common type of food, as seen in levels such as Sweet Sweet Galaxy, Sweet Mystery Galaxy, and Cakewalk Flip, though some levels use other types of food. For instance, the Luncheon Kingdom from Super Mario Odyssey is stew-themed, while the Golden Temple from Donkey Kong Country Returns is fruit-themed.

These levels take place on a pirate ship or boardwalk with an armada of warships in the background. These usually overlap with the sea and coastal themes due to their location. Pirates and aquatic enemies are most common here, with cannonballs and bombs being common obstacles. Climbing on masts and ropes are usually the way across these levels. These levels often appear in the Donkey Kong Country and Wario Land series.