From the Super Mario Wiki, the Mario encyclopedia
< The 'Shroom:Issue 160
Jump to navigationJump to search 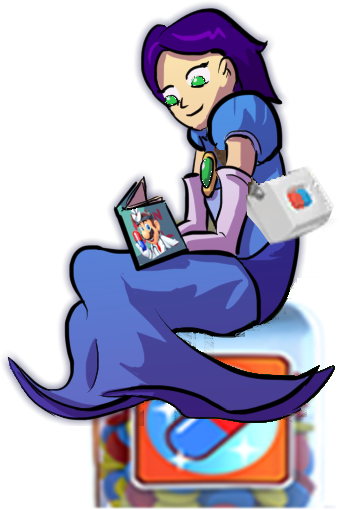 Welcome to July where I don't think anything is real anymore! Since last month, a few friends and I have taken up geocaching! We've had quite a few good finds so far! Unfortunately, we may not be going again anytime soon because one of us is now pretty much under house arrest...

You may notice a slightly different portrait on the right this month, and that's because I'm studying up to be resident nurse of The 'Shroom! You know, you have to be serious about your studies for this sort of thing. Otherwise, no one will be healthy ever! (Speaking of healthy wear your masks while in public kthx)

We have a treat this month in the form of a special interview by Ninja Squid (talk)! If you are interested in writing Interview after this month, or any other section for Pipe Plaza, head to the sign up page to get started! Other than that, do enjoy this month's Pipe Plaza!

Hello, everyone! Welcome to NIWA News, a section where I, Alex95, talk about the going ons with the wikis in our NIWA group within the last month!

Hey guys, and welcome once again to Mario Calendar! I’m sure you’ve caught on at this point, but if you’re new, this is where I list all of the Mario games that have come out this month! That means we’ll be covering July this month! Let’s-a go!

Overall, I would say this was a pretty good month! Not a lot of games came out this month, but stuff like Super Mario Land and the new Paper Mario came out! Lots of variety! I personally am very excited for the new Paper Mario, and while it hasn’t come out yet (I’m writing this on the 16th) I hope to pick it up when it does! With that being said, have a nice rest of your day, and I’ll see you next month!

“So I wake up and there are real biblical locust everywhere. So naturally I sit down for a cup of joe.”
—Chester Alan Arthur (Talk Page · Forum Profile)

Welcome to the special Dr. Mario edition of Anniversary Announcements! Unfortunately, I have nothing that fits the theme to report, but it's the spirit that counts!

On the 14th, the polls have closed! Thanks to everyone who voted!
There are still some presentation spots left to fill though, so please, sign up for one!

In just under a month, on 14 August, is the Awards Ceremony! Don't forget to mark your calendars!

Let's have a look at how our tournaments are coming along now, shall we?

Both of the first games, Archangel Solutions and Deimos Matrix Corp., have been completed, with each four correctly solved murders.
The remaining 14 players have moved on to the merge map, Neo Hope Foundation, which consists of another two floors and the basement of the Neo Bowser Skyscraper. In this map, investigation and voting will be limited to 24 hours instead of the 48 in the previous maps. Both maps had one of the NPC's die (one by lynch, one by murder), but they have been revived and are also present on the merge map.
During the game, various people have been creating memes, art, meme art and other creations, and have posted this within the Discord server linked in the game thread. It is highly recommended to have a look at this!

Seven rounds have been completed, with the eighth going on as of release of this paper.

5 rounds of singles have been played and 4 for doubles, with the 6th and 5th going on as of this publication, respectively. Additionally, it was announced that the winners of singles and doubles will all receive a Nintendo eShop card of $20!

Five rounds have been completed so far. The third round was held at GBA Bowser Castle 3, the fourth at GCN Waluigi Stadium, the fifth at Moonview Highway, and the sixth and current course as of this publication is Wario's Gold Mine.

Sign-ups have closed, and a single round game of both versus and battles will be played over the next three weeks.

Other games include the third Anniversary Scavenger to be hosted by Lakituthequick.

And that concludes a short Anniversary Announcements for this month! Next month we'll have Committee Interviews with our freshest members. Sign up for a presentation if you haven't done so already, and I'll see you at the ceremony next month! Buh-bye!

Hello, 'Shroom readers! I hope that you are in good health, and if not, well, Dr. Ninja Squid has a good medecine just for you: A special interview. Who it is? Well, it's none other than your former interviewer, but also our current forum mod, Superchao! Without further ado , let's get right into it.


Conclusion:
Superchao is very friendly, and to tell you the truth, I have to admit that for me it didn't sound like an interview at all, but a completely normal conversation between me and him, which show how much natural that it was. I hope you learned a lot about our dear moderator, but also about the history of the community from someone with a lot of experience in here. In any case, I will now wait for our next meeting in 2026, unless we are simply unable to wait until then. Until then, see you around!