“I have something special for you!”
—Taj the Genie, Diddy Kong Racing

Taj the Genie is a blue elephant and a genie who lives on Timber's Island. His only video game appearance is Diddy Kong Racing, and its Nintendo DS remake, Diddy Kong Racing DS. Taj could have possibly been inspired from the real-world Indian elephant, considering his basis from Indian culture. His name may come from taj (تاج, from the Arabic word for "crown"), a brimless hat worn by people from Muslim countries. It may also be a reference to the Taj Mahal, a palace in India. 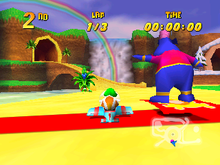 In Diddy Kong Racing, Taj's role is assisting Diddy Kong and his friends in banishing Wizpig from Timber's Island. At the start of the game, Taj introduces himself to the player as the "genie of the island". His main purpose is providing the player with a Golden Balloon after clearing a course, a Silver Coin Challenge, or one of his own vehicle challenges for the first time. He also rewards the player with a T.T. Amulet piece if they complete a specific world challenge. He also provides a hint to the player after obtaining the first two Wizpig Amulet pieces, from Tricky and Bluey respectively.

Each of Taj's vehicle races occur later in the adventure. The first challenge involves the player racing him in a Car, then in a Hovercraft and lastly in a Plane. Taj uses a magic red carpet for transportation.

Taj is always seen walking around a grassy patch in the center of Timber's Island. The player can get his attention by either bumping into him or honking their horn nearby. By getting Taj's attention, he gives two options on a menu: changing the current vehicle on Timber's Island or retrying one of his vehicle challenges. Taj offers to further assist the player after they selected an option from his menu; when the player exits the option menu, Taj says bye to them, and vanishes in a puff of smoke. He returns to roaming around the grassy field of the world map.

After beating Wizpig in the first race, Taj and T.T. congratulate the player. Taj and the playable characters all party in the beach portion of Timber's Island, before being interrupted by Wizpig. Taj also appears in the second ending, after Wizpig's second defeat. He is also seen celebrating with the playable characters and the four bosses. The carving of Wizpig's head on the frontward mountain of Timber's Island is replaced by a gold replica of Taj's head.

An unused music file in the data of this game features the player select theme played on Indian instruments. This could mean that Taj was planned to be a playable character at one point in development. 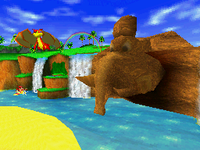 Taj's head replaces Wizpig's on the mountain in the ending of Diddy Kong Racing DS.

Taj also appears in the remake, Diddy Kong Racing DS. Aside from his usual role, Taj also appears as a newly unlockable character, and can be obtained after the player completes the first Adventure Mode. Taj has maximum top speed, but minimal acceleration and turning; his stats are shared with Wizpig, who is also unlockable in the remake. If the player talks to Taj as the playable equivalent, Taj gets confused, believing that he is going crazy from talking to himself, but decides to offer assistance regardless.

Taj originally had an Indian accent, which was changed to British in the remake. Taj may be based on the Hindu god Ganesha. Taj does not have as much dialogue, since he does not have lines when introducing himself at the start, or in the sequence where he awards a Golden Balloon to the player. He also only allows them to select one option before vanishing.

In the game ending, the gold replica of Taj's head was altered to have the same rocky texture as the mountain side.

Taj the Genie in Mario no Bōken Land

Taj makes an appearance in the Diddy Kong Racing story segment of Mario no Bōken Land, titled "Go Go Diddy!". He is shown competing in a race with various other racers, riding his carpet in fourth place. The race is interrupted when Wizpig appears, hurts Taj, and rips up his carpet, which strips Taj of his magical powers. Taj casts a spell to turn Mario, Princess Peach and Diddy Kong's cars into airplanes so they can follow Wizpig as he flies away. Diddy defeats Wizpig, and knocks a pile of rocks from a cliffside onto him. The racers award Diddy Kong with a crown for his heroic efforts, and declare him victor of the race; Taj can be seen celebrating this occasion. The last panel of the comic segment shows Taj telling Wizpig that he will help him out of the rock pile up, as long as he doesn't continue to do evil things.

For this subject's image gallery, see Gallery:Taj the Genie.