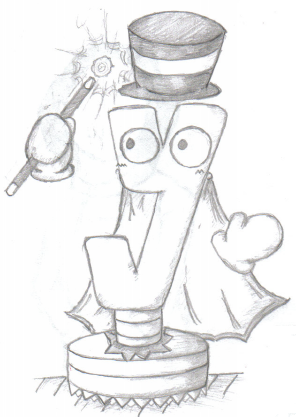 Bottle Wizzerd, who isn't really a Wizzerd or a bottle. Heh.

I just thought it would be interesting to add this section. The name comes from one my favorite Paper Mario baddies, the Wizzerd, and the word "Bottle". Simply because I was working on an Arts picture which consisted of giving human characteristics to an object. I drew a bottle, and the outcome looked like a Wizzerd. Yeah. <__<

Yep. If I listed all games ever, this would take forever, so let's just stick to Mario. There's probably more Mario Games I have played, but didn't list.

Well, I believe that's it. TO BE PLAYED GAMES:

Articles I have created

My first contribution ever was in the Goonie article. I added a picture of Goonie in Brawl. Not very special, but I have grown to love Goonies now. <3 This is a list of the articles I've created from scratch or have heavily edited. If you're bored, then check 'em out and drop a comment or two at the Talk Page. Critics, compliments and even death threats are always welcome.

Ignore this. It's for me.

-> Remember to check FAQ in GFAQs for Thwomp Appearances.