This is not a forum for discussions about Super Mario 64 DS. Please ensure all comments are related to improving this article because questions such as "Who is your favorite character/team/area in this game?" are not allowed and will be removed on sight. Please use the Mario Boards or our Discord to talk about Super Mario 64 DS.

Shouldn't we merge this article with Super Mario 64? It's simply a remake w/ some newly created challenges, more characters and a slightly different storyline. The powers and levels are still the same, with improved graphics. Wayoshi 20:57, 3 July 2006 (EDT)

I'm not sure. There are enough chages to Super Mario 64 DS its own article. More playable characters, more levels, more stars, different power-ups, including the Power Flower. It's much more than a simple remake. However, the two pages should be linked together. --Son of Suns 02:03, 5 July 2006 (EDT)

Using the same title and the same base environs. -- Son of Suns

Since this is a remake, how come I keep seeing it referred to in this Wiki as either non-canonical or a separate incident from Super Mario 64? I must admit, I am confused... Dinosaur bob 13:54, 1 July 2007 (EDT)

It can't be a remake. Super Mario 64 DS has 4 playable characters. The original version had only Mario. This version: Wario, Luigi, Mario AND Yoshi. NOT A REMAKE.

This is a remake. With that said, I do believe this is a remake that has changed substantially from the original. However, it hasn't changed enough to be the same game. It still, basically, has the same worlds, same environment, and same enemies. Just because they added playable characters and they changed the plot ever so slightly to accommodate the new characters, doesn't mean it's an entirely new game. I rest my case. YoshiAwsumness (talk) 21:12, 2 December 2013 (EST)

I know I'm kinda late for this but I also think that this isn't a remake, even if it has the same gameplay, levels, whatever... Because Koopa the Quick mentions that Mario is fatter since he last saw him. In the original he talks to Mario as if he has met him for the first time. If this was a remake it would never talk about the original, StarFox 64 3D(I know this kinda off-topic) on other hand is a true remake because the characters never mention the original game. So I think this game is a direct sequel. --CastleResearch (talk) 15:55, 30 May 2015 (EDT)

Isn't this an FA?

I don't know, but it sure looks like it should be.

WarioLoaf and I rewrote it; WL did the code and I wrote an entire walkthrough. It got nominated; didn't make it.

Are the in-game instructions for the mini-games identical to those in New Super Mario Bros.? I only have the latter and would like to add the instructions to the articles. Time Questions 15:17, 3 January 2008 (EST)

I found this picture, and I think it is fake. Image:FakeWaluigi.jpg
The preceding unsigned comment was added by Lewa159 (talk).

YES, it is fake. It's been specificly stated to be fake. And, people have torn the game apart, ripped up the ROM, and found nothing of Waluigi. And, sign comments plorx.GreenKoopa - Comments or questions?

Some code at the end of the page seems to not end, and seems to keep the templates towards the middle and some other things. If I'm correct, it seems to be coming from the differences section towards the bottom of the page. May somebody fix this, as I don't know how, please? --Palkia47 21:11, 28 July 2008 (EDT)

I added that some of the games are from NSMB I wonder wwhy no one else did that.ratfink43

Within the past two weeks, I decided to attempt to beat Super Mario 64 DS without rescuing Wario and Luigi. In the latter case, Wario also would not be saved. This article is untrue in that a player does not need to save all the characters to battle the final Bowser upon obtaining 80 Power Stars. In addition, not saving characters creates two alternate endings to the game. The first shows Mario, Luigi and Yoshi with Peach and all appearing as figures on the cake. The second shows just Mario and Yoshi meeting Princess Peach and only the three of them appear upon the "Thank You" cake. 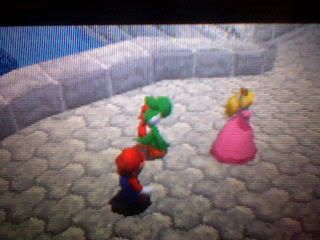 I think this needs a gallery. Mario Bros.!

There is no mentioning of vs mode in this article. I believe that it should be added.

I don't know about that.

It really does need to be added since it is an entirely different mode of the game and deserves a place.-Bowser45(Fun Isn't Infinite)

Split Mario and Yoshi's Power Flower Forms from this article.[edit]

Create articles for both forms 7-0-2-0-0
Now correct me if I am wrong, but I do not see any articles for Mario's floating power or Yoshi's fire breath. I know there is an article for Bowser's Fire Breath that mentions Yoshi's power-up, but does not even have quarter of the info I would put on a page if it was created. So, to keep consistency I would also create a page for Mario's Power Flower power too. Luigi and Wario's Power Flower powers got merged into their respective articles. So I think both of these power-ups deserve their own page.

Create Articles for both of these[edit]

Do not create an article for either[edit]

I'm on the fence when it comes to Yoshi's but i'll support Mario's if all the information about Mario's floating form from Super Mario World is merged into it since they are the same thing just with different power ups. Raven Effect (talk)

Shouldn't we just expand on Yoshi's section in the Fire Breath article rather than create a whole new article for it? Tails777 (talk)

We could do that, but I already have an idea for what an article would look like I'm making a draft right now. Koopa K (talk)

Well, I gave up on the draft, but my idea is a brief introduction, then a description of the Power-up itself. Also adding a table of levels that Fire Breath is required to use to complete. Also, we could list places where you can be Fire Breath Yoshi. Koopa K (talk)

That would work I guess. 2nd question what is the difference between Yoshi breathing fire and bowser breathing fire other then the fact that yoshi get's his from a power flower. Raven Effect (talk)

Yoshi's power is limited and Bowser's power is unlimited. Yoshi's fire breath is smaller than Bowser's. Bowser's can split into multiple pieces. I could probably list more when I remember them. Koopa K (talk)

All of that stuff is trivial and can easily be listed in the fire breath article. Creating one for Yoshi's fire breath would be like creating one for Fire Bros. fire breath because it shoots them out of it's mouth in little ball that are smaller then Bowser's. Or creating separate flutter jump pages because Luigi's is higher then Yoshi's. Raven Effect (talk)
Actually we already have one. Technickal (talk)

I wonder if we should explain about Princess Peach's ponytail in the game why it was changed to long to ponytail. Choose whether you support or oppose this choice.

It is already mentioned in the article in the differences section and since it's really not that important I don't think we should mention it in any more detail. -Bowser45(Fun Isn't Infinite)

But, what if we should?

I agree. It's a bit annoying to have to follow the rows in the table to see the difference. I'll be happy to make them into bullet points if you want, Glowsquid.

Wario is available to get to Lethal Lava Land. Can someone change that?

How to get each star[edit]

I noticed that two of the "Characters Required" sections were wrong. It says that the first race with Koopa the Quick requires Mario, when in fact Yoshi can get it with the cap. For Hazy Maze Cave's first level, Wario is not required, also because his cap appears. These definitely should be changed, as other stars where a certain character is recommended (like the Chain Chomp star in Bob-omb Battlefield) are correctly listed as being obtainable with every character. I think someone should go over these and make sure they are correct. Thanks. 99.107.199.30 21:20, 26 March 2013 (EDT)

Well, these are correct because technically, with the cap, you are playing as the required character to get the star.

Should 64 references in later games also be in here?[edit]

Header says what it is. This is the remake to that game so wouldn't certain references from 64 also be references to this game, like Tick Tock Clock appearing as a track in Mario Kart DS? Yoshi876 (talk)

For the 8 Glowing Rabbit Star, the article says 80 Stars for make a random rabbit glowing, but the Rabbit page says 50. Which is true? World of Tsunami!

Had to restart the whole game, 50 is the correct amount.--

In the differences section the Star 2 of Secret Slide says that Luigi must go to the slide in order to achieve less than 21 second (and I get a 20.42 with him). This is untrue as I get a 20.65 with Mario and about 20.95 with both Wario and Yoshi.

True, you can even get around 17 if you used shortcuts.--

17? HOW? O_O If I try to jump after the first two turns to the right I lose time

I went to Tall Tall mountain and ate Ukikki right before being hit by fire. I ran into the water and ukikki stayed in my mouth. He came out if I spat him. One time he stole Mario's cap in my mouth.

Can I replace this image?[edit]

with a render of the balloon mario model (from the game rom's files)?

According to SM64DS level editor, Peach has at least 3 unused animations that includes a idle, run and jump animation very similar to Mario & Co. with the former being looking right and left like Mario, Luigi, etc. Does this mean she was going to be a playable character? I think we should put this in the beta elements.

So, some stars (example: Big Bob-omb's Revenge) Spawn Caps that you can use to get said star (Example case: Mario's Cap) but those stars mark the caps that can be used as "Character Required", so I'm confused. Sidenote: Using a cap spawned in star 4 of Big Boo's Haunt you can Unlock Luigi, as Yoshi, as Luigi. Just to complete the Trio, one can be found on Dorie in one of the stars, don't remember which though. Probably Metal-Head Wario Can Move--Lava Juggle (talk) 21:47, September 15, 2020 (EDT)