I decided to archive my first talk page because it was getting long. It can viewed here: User Talk:New Super Yoshi/Archive 1. Post your comments below. NSY.

Can you change it tothis? --

Was that really necessary? I'd advise you to:

I don't want to see this again. --Bryce

By the way, there must be a main "sub-page" in order for the template to work, and so if not, the template would be extremely hard to get working. --Bryce

No problem - as long as you've learned from the mistake, that's fine. --Bryce

I don't like to hold grudges with other users. Can you please forgive me for what happened here? I'm really sorry.

Thankyou! You are a great contributor to! Please take my box!

PS;Can I please have your box?

In the case of the "Mario Tennis Open" title, was the title confirmed by Nintendo themselves when you saw it from the source you posted? We still have a right to revert it to the previous title if the evidence still isn't satisfactory. Let us know soon, and thanks. --M. C. - "Mario Gals" Fan! User Page | Talk Page 14:11, 14 February 2012 (EST)

Hello NSY! Do you have a userbox? Without your usebox, my life will end!!

Thankyou so much! Do you have time to go to chat?

Yo! Thanks for moving the page Bugle. I really appreciate the help :) PS. What was crazy?

Will you be my friend? This is my friend userbox

hey, NSY, can we be friends?

Please stop changing the newsubject template. The template you are using is for the game itself Raven Effect (talk)

could u be my freind?

CatJediMay the force be with you

Just so you know, the info on Umbrella (Yoshi's Story) was copied from the Yoshi Wiki, but, I created that page both here and there, and it hasn't been changed since I created it on the Yoshi Wiki. So, I can use the info. BooMaster 10:02, 25 March 2012 (EDT)

I was doing some investigation myself; do you have any comparisons of editing behavior between Sonic & Boofan and Bowser Bowser Jr. Boo by any chance? Just making sure before I or anyone else here on staff takes any action on said matter. --M. C. - "Mario Gals" Fan! User Page | Talk Page 14:01, 26 March 2012 (EDT)

It is him for sure. He wants every NSMBW sprite in the gallery, his pages are almost the same. Some how he hasn't been blocked. Maybe his IP thing is different from his last.

Do you plan on supporting the proposal? Or is there something you want me to add? Bwf8398

I think it's best to discuss about this in the talk pages, not the reverting summary. Those summaries take up so much unnecessary space on the page.

Make sure UltraMario is aware of this too. We need to be fair.

Hi There im Hippihippi can you see my user page and message me!
The preceding unsigned comment was added by Hippihippi (talk).

Do you still think Sonic and Boofan is Bowser Bowser Jr Boo?--

Thanks for the burocratic speech You could move it, instead of copying the content and marking for deletion that page. That's what the move option is for, yea? 😒

This proposal says that all forum comments should go, even old ones.

HI WANT TO BE FRIENDS?

Please stop putting the Mario WiiU screenshots to the WiiU article. You know my reasons in the WiiU's history page. Don't do it or welse I have to give you a warning. ¢oincoll€ctor

WHOMP KING IS A SUB-SPECIES OF A WHOMP ITS NOT A WHOMP SPECIES!! HE'S A THWOMP!

The biggest Spike ever!!!

Hey, I was looking at your User page, and I noticed that you love Yoshies too! Since we're on the same page (Pun not intended!), you wanna be friends?

Ok I just forgot we had a template for that.

Hey, New Super Yoshi, do you want to be my friend?
The preceding unsigned comment was added by EthanFerris (talk).

Hi! I love your name and the yoshi on your page. wanna be friends?

Oh flippin hell no... why am I cursed? I did that on my 3DS browser and things can get really tricky and somehow all that got deleted. Ye its already happened once with some users comment although it was because of multiple edit saves at once. Even though I'm pretty much ruined now, I might as well just tell you that (yet again) it was an honest mistake. Afterall, I had written the Wii peripheral section so why would I delete it? I don't expect you to believe me, no one will now, but there you go. Oh well this is the end of my MarioWiki days I guess, too many warnings and users. Thanks for undoing it quickly though. Jackpot

And btw I only meant to delete the last paragraph of the intro, that was the old info I was referring to. Jackpot

His explanation is perfectly reasonable (plus, we confirmed he was using a 3DS at the time), and it makes more sense than him suddenly deciding to vandalize out of the blue (his last warning was issued months ago). If he didn't look over the page after he made his change, he wouldn't notice the inadvertent removals, so the fact that he didn't undo his edit isn't incriminating at all. Please be more careful when issuing warnings in the future: the users most likely to vandalize are new accounts, not established editors. - Walkazo 19:52, 14 September 2012 (EDT)

Wow thanks a million Walkazo that's twice you've saved me now. I don't know how I can repay you now. Also, just answering NSY doubt of me lying, I didn't undo it because the page is too big to load on my browser so I don't check it. I manage to edit it because I click the edit hyperlink before the page gets too big. Anyway I understand that you might be dubious about these given my past, but believe me those days are gone. I myself am still sorry for causing all this and I will make more of an effort to check for mistakes etc. in the future. Jackpot

Guys, please don't send in Friend Requests as I'll shall ignore them on sight, thank you, NSY

Seriously, stop undoing them. What I was doing was perfectly valid. Look at the history for Flinger Painting and you will see. --- ThePremiumYoshi

YoshiKong & I improved it and removed the template.

I asked a patroller in the forums, and he said that that trivia is not worth mentioning, because the chicken looks just like an ordinary chicken, and you could say that every red and white chicken resembles Cuccoo. --- ThePremiumYoshi

I made a new choice. Please check your opinion again.. thanks! (Here)

"It's not name that decides what goes in each page, it is the function that decides, if this passes I will propose a reverse and then people will understand why it needs it's own article."
If you do, remember to add the choice "Move to Door (Mario vs. Donkey Kong)"--

Please mouse over the Wario picture for the detail 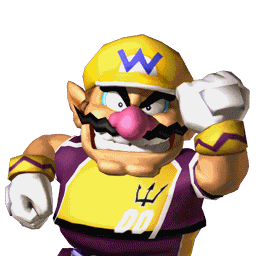 I know it's over. Still, I don't want to go over there. You can't have a serious discussion there, really. If you try making a serious topic, people are going to flame each other and crap. I can't take those forums seriously anymore.

Can we be friends? And I know that you don't accept any userbox, right? ☮ Pinkie Pie (talk · edits)

I kinda saw it coming. Before I went to bed the night before I was banned, I checked Who's Online and saw that Blocky was viewing my profile. And well, I'm pretty sure both of us know what happened after that. :/. UM3000

Well, I can say one thing about the ban reason:

"Continuously made pointless and off-topic posts despite multiple warnings and a suspension."

Quick reminder for you: a stub is not a short article. A lot of stubs tend to be short articles, but not all short articles are stubs. Stubs are articles that are lacking information, and nothing more than that. I just want to prevent any miscommunication in the future. Hello, I'm Time Turner.

Hey. When marking pages as new stubs, use {{SUBST:New stub}} as it keeps the timestamp correct. If you just normally put new stub the timestamp will be incorrect. Yoshi876 (talk)

Hey, your signature needs to fir inside that box, please resize the images. Yoshi876 (talk)

I was told to notify everyone who voted here that the template design has recently been completely changed. This may or may not influence voters to change their opinion. Thanks, Andymii (talk) 21:05, 12 January 2015 (EST)

you did good replacing the image, but next time, please format the aboutfile template correctly.

My arguments are on the page. And don't worry about it being harsh. Whether or not its deserved, I guess I should try to pay attention to my edits now that I look at my edit count, so thanks for the notification.