From the Super Mario Wiki, the Mario encyclopedia
Jump to navigationJump to search
Status: OK! I admit it! I rejoined the wiki just because of the upcoming 3DS games! 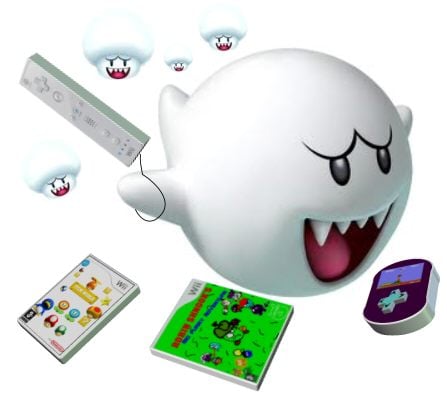 Hi! I'm VideoBoo, I'm just a Boo that loves the mario series. I found this wiki when me and my bro were Mario crazy and we looked up images of Goombas on google, and you know how when you click on an image on google, it shows the site that it belongs to. Then we found this wiki I'm like a video game addict and whenever I hear about a game that seems fun, I WANT TO GET IT THIS INSTANT!!! Don't be shy (like my species) to talk to me, I acctually like getting messages. And to tell you the truth, I would be happy to make a page for un-autoconfirmed users.

to anyone who wants to be my freind, take this userbox: |-

But you should talk to me too.

I wish I knew who was online.

Wait! I just bought an up to date whosonline.

Oh yeah, if you want information on my bro. see here.

an equivalent to Super Mushroom to the boos

an equivalent to Fire Flower

an equivalent to Ice Flower

an equivalent to undiscovered Stink Flower

an equivalent to undiscovered Electricity Flower

an equivalent to undiscovered Werewolf Mushroom

an equivalent to Golden Mushroom

To tell you the truth, they are my minions. Respect them, or else their revenge would be terrible...

Hey! Now that I think of it, There was a mix-up! It was my 6 favorite enemies! Eeheeheehee!

Quick! Whoever is reading this must write down his answer immeadietly! I haven't got much time! Seriously!

A Goomba has been squashed! the Society Of Creatures and the Koopa troop (SOCK) hired a detective to find out who did it! The suspects are down there, and they all have there own little story.

Now before the second of January you have to give me the name of who you think is the culprit! And the person that guesses correctly will get his prize. And what if more than one user gets the right answer? The first user that said the right answer will win the prize. See you soon!

Oh, and P.S.: When you tell me who the culprit could be, you have to tell me the reason that you think it's him. So if you chose the right suspect but the wrong reason, that counts as a bad answer.

I bought a Blooper cheap from the store. He came with a bocal

I think I'm going to call him Inky. I hope Inky will have fun.

Don't forget to feed him while I'm away. Oh wait, I've already hired a nanny to feed him gumdrops.

I'm woried if Inky is lonely, so I'm searching for a Cheap-Cheep! You get it? Eeheeheehee!

Look, I know that I didn't play many Mario games, but it's because my parents don't want me to get too many un-active video games.

I love this one. It's the Luigi's Mansion Beta theme song.

I like this glitch, but the part when Baby Mario whines gets me irratated.

Princess doesn't see the diffrence between Mario and a Goomba

Mickey was much better before right? Too bad that now he's just for kids of 2 years. Well at least they change that in Epic Mickey. Do you own that game?

For some reason, I added a non-Youtube video on the You tube section.

Alright. now, three people find a servant that would do anything you ask him to do. Right, so a greedy fatso asks for Gold, and of course, the servant gives him what he wants. After Wario goes away with his moolah, a Star bit hating Monkey asks for bananas, and the servant instantly obeys him. The Chimp eats the bananas and goes away. Then a weird brown mushroom was going to say what he wanted but he sliped on a banana peel and says: "Shoot!" So Bootler takes a Super Scope and s***ts.

So, it's Yoshi's birthday, and he invited evryone he knew, even if some of them were his enemies. Then a Beanish guy arrives and gives Yoshi a Present. Yoshi is happy to see such a big package, and then he asked the Beanish: "Is it a cake?" The Beanish says no, and then Yoshi notices a liquid coming out of the box. He licks the liquid and says: "Oh I get it! It's a jar of pickles!" Then the Beanish looks at Yoshi with shock and says: "Uh... It's a puppy."

There. I hope you liked my jokes, because you have to pay.

Yoshidude99 (that's him) and his pal, VideoBoo (that's me), were hanging out in an arcade playing video-games. They were so willing to complete the game that they didn't realize the arcade was closing (how normal). Once they finished their games (or in VideoBoo's case, lost it) they found out that the arcade was closed VideoBoo said: -"Let's play that game!" He was talking about the multiplayer game called "Eat the pizza 2". It was basically like the "Snake" series (see [[2]]) exept that you eat pizza instead of dots, and there were enemies that olny blocked your way. -"This is boring" said Yoshidude99 -"Wait!" said VideoBoo "Look at that button over there. I'll press it!" Before Yoshidude99 could react, VideoBoo pressed the button. Then they were transported into the video game. Inside the game, the enemies were very vicious, and almost K.O.ed VideoBoo, but they found out about one of the worst part of it: the snakes. They were really fast. faster then a jet plane. after avoiding getting eaten, Yoshidude99 found a little crack on the edge of the screen. He and VideoBoo joined forces to break it, and when they did, they found 200 Boos working endlessly. They were trapped in that game by Weegee, to power it up. Before the captured Boos could say more, The snake came charging like a freight train. Evryone backed up (apart for VideoBoo, confused). Then he smashed the wall, and became unconsious. Evryone got out from it (even a flatten VideoBoo). When they were Finally free VideoBoo said: -"Let's play that game!"

Well, I sure hope you liked my page.

I was just kiding.

Now, as I said, I sure hope you liked my page.

And whoever is reading this talk to me.