Can we move/split this to Honeybee? Look at this screenshot: 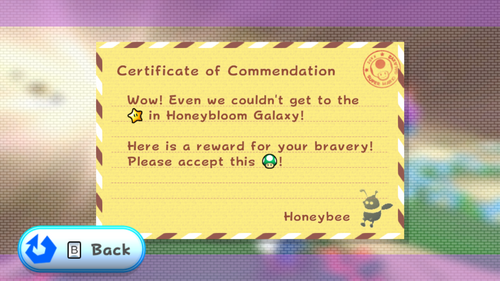 The name Honeybee is official. SWFlash

Is Honeybee just one character or the official name for the entire race? In any case I definately do agree that the Bees of Mario Galaxy need to have there own page, since they are a specific species just like all the other bee-like enemies mentioned here, who already have their own pages as well as a mention here. This article is still good in my opinion though, but just as one that directs us to a wide range of different species inspired by a real-world creature.--Goomboy 11:58, 3 February 2012 (EST)

I think we should split the smg bees too yoshiyoshiyoshi (talk)

The Bee Quote is

Can we change this because it is the same quote as the Honeyhive Galaxy quote. We don't want replica quotes, right?

That's true, though the quote is meant to characterize the personality of the species or character. I personally think it's better than any of the "humorous" quotes because they don't really mean anything to the bees; any character could have said that. I suppose this quote will suffice for now, though I will try to look for better options. MarioComix (talk) 22:43, 4 March 2014 (EST)

Thank you for your opinion. I have seen the new quote, and like it.

Pretty sure the enemy bees and SMG bees should have their own articles, seeing as how they're only identical by generic name. Niiue (talk) 23:57, 6 January 2016 (EST)

Quite a few of these Bees (Yoshi's Story, Mario & Luigi, Super Mario Galaxy) could stand to be split, and this article could be used for the generic ones like Super Mario Sunshine and Sm4sh. Hello, I'm Time Turner.

I don't think the M&L ones deserve a split, since from what I can tell, they aren't separate enemies, just glorified projectiles. Niiue (talk) 12:42, 12 January 2016 (EST)

failed 1-5
For some reason, this page is essentially just a list of bees in the Mario series. Because of this, the bee NPCs in Super Mario Galaxy and the bee enemies from Yoshi's Story are on this page, even though they have nothing to do with each other or generic real-world bees, any more than they have to do with Beezleys or Zingers. Sure, they don't have unique names, but neither do Bees and we have those split.

In the Super Mario Galaxy games, the name of this species wasn't "Honeybee"? Implied by the image shown above.--

Some users are saying that "well, we don't know if that's an individual or a species name" but I think that is looking way too far into it.

In addition, the use of the plural instead of the singular form in the letter, and if it was in the singular, it would be easier to whether or not it is a character or the name of the species. But the use of the plural and the supposed character that makes no distinct appearance may assume that this is the name of the species. Maybe It's too much interpretation.--

@Walkazo: I can accept the SMS ones as being generic (seeing as how they don't have a unique design), but the Yoshi's Story bees are definitely deserving of their own article. As I said before, the only reason they're not split is because they didn't get a unique, "Mario-sounding" name.

@Bazooka Mario: Butterflies don't really act all that different in games they appear in (they supposedly attack you in Super Mario 64, but I haven't been able to find proof of it). Chickens are sort of iffy, since splitting them based on their Mario Party appearance could lead to splitting a ton of "variants" of recurring enemies. I actually plan to make a proposal to split Luigi's Mansion: Dark Moon crows seeing as how they're about as deserving of a page as ghost bats. As for the various inanimate objects, barrels usually don't act that different between games (unless I missed something, which is entirely possible), and soccer balls only really change in appearance, not function. As for bananas, I actually made a proposal a while back to split the ones that function differently, which failed. Niiue (talk) 16:57, 31 January 2016 (EST)

Many things in Yoshi Story were given unique aesthetics. Like Blarggs, Spiked Fun Guys and Gabon/Spikes. Lots of other enemies get different appearances in different games; when there's no significant behavioural changes and/or unique names to go with it, there's not enough cause to split. - Walkazo 17:12, 31 January 2016 (EST)

Good point. Though I think there's more cause to split with the fact that there are apparently two sizes of the YS bees, which act differently. Niiue (talk) 17:18, 31 January 2016 (EST)

Yes, they all do the same thing, but the entities you want to split aren't drastically different from each other, behaving like normal bees. The sentient ones could use their own article perhaps, but the ones you propose, I don't agree.

Still on the oppose side. Per all reason stated here on the comments and on the opposition why Yoshi's Story's bee should not be separate from here. The only one I support splitting are the honeybee from Super Mario Galaxy which I already stated on my vote.--

Split the Super Mario Galaxy bees from this article[edit]

passed 11-0
There are two vastly different subjects being covered in the same article. One is a sentient species that often helps Mario and has distinct members, and the other is the real world animal that appears in many forms but is near-consistently an enemy. There are some distinct differences here, and they should be plainly obvious. I still find it ludicrous that this and this are treated as if they're one and the same. Do you think our readers think the same, and click on this article expecting to see all of these different kinds of Bees? I sincerely doubt it. However, the SMG Honeybees are obviously based on real bees, so it makes sense that they'd be in the same article, just as Doogans and Nintendogs are merged with Dog, and Pigs and Li'l Oinks are treated as the same thing, right? Wait a minute, they all have separate articles! Why do these gets lumped together, then?

For the sake of consistency, ease of access, and sheer logic, I want to split them.

The name Honeybee is official as per the very top comment of this page, so the way I see it, this proposal isn't needed.

Figured since Honeybee is the official name, a proposal isn't needed, but I'll vote to overturn the previous proposal.

split 5-2
There was an attempt to split Yoshi's Story bees. First of all, they have a non-generic Japanese name. Second, there there are other enemies based off of real world animals, but these have a non-generic Japanese name. I may have missed some points, but you'd add more points about it. Anyone has the Sunshine bee Japanese name? The Yoshi's Story bees being merged here seems pretty bzzzzzzzaffling to me. It' for the big ones.
Proposer:FanOfYoshi (talk)
Deadline:February, 1, 2019, 23:59 GMT

I assume you're just referring to the big ones? I'd like to know what the Shogakukan description of them says. Doc von Schmeltwick (talk) 12:33, 18 January 2019 (EST)

Well the small ones are literally white dots that form a hand shape. Hard to depict that efficiently. Anyways, ask LTL about what their entry says. Doc von Schmeltwick (talk) 15:06, 18 January 2019 (EST)

He'd take time to answer though, the proposal would have already passed when i'd have asked him. I am patient though. --

Anyways, if it only applies to the big ones, i think the Yoshi's Story identifier is redudant IMO. --

I used to have the Sunshine Bee Japanese name, as there was a full scan of the shoga on ImGur, but unfortunately, only one pair of enemy pages there is still accessible, and neither one is the one with them on it. They have a section (with artwork!) though.... Doc von Schmeltwick (talk) 03:35, 20 January 2019 (EST)

I'd likely ask Mister Wu for those. --

Done, along with the SM3DW Fuzzy Horde. I don't think it will be Bunbun. --

Description is the small one, but the artwork is for the big one. Let's say both? --

Could be just the small ones, given how that'd be pretty much impossible to represent. Desci might actually refer to both. Yes, let's say both. Doc von Schmeltwick (talk) 01:37, 21 January 2019 (EST)

The text is 大群でやってくるのが困りもの。うるさい、うるさい。According to LinkTheLefty, it translates to: A swarm in the way is a pest. Pesky, pesky. Although, the big ones don't try to harm Yoshi, he'll get stung if he touches them from the sides. I think there is only one entry for bees. --

I know fully well it says that. The larger ones are still in groups, just smaller groups.
@Baz How about the "holding Yoshi in place by forming a weird hand shape" thing? Doc von Schmeltwick (talk) 16:38, 21 January 2019 (EST)

@Bazooka Mario and @TheFlameChomp, it's less "because different name in Japanese" and more because non-generic Japanese name, much like the frogs. --

To clarify, while sometimes i agree that the Japanese names are a moot point, the enemies based off animals in this game don't have a generic Japanese name. --

It is not a good idea to apply blanket changes based on Japanese names. Sometimes, the localizers make a good call too, and our wiki has English readers, not Japanese readers. This whole "Creator's intent" is a substance less argument and just handwaves potential deliberate localization changed and it just doesn't really align with our wiki goals of prioritizing English names. Yeah, the bee will get an identifier, but this is at our expense of the bee article and we also make a small page that might be just an additional step, all over some name being different in a foreign language. Whenever Japanese names should be applicable to splits and merges has always been case by case; that Bee from Wario Land gets a split for unique gameplay function, being a transformation. This, this is just a generic bee in the end. This proposal hasn't made a single argument for splitting beyond different Japanese names, but in my experience, this went against precedent, and so that's why I oppose.

Admittedly, originally, the wiki relied on localizer's intent, but was later then changed to the creator's intent. You are allowed to vote what seems to be the most appropriate option for you though. --

Update on this situation; it should indeed only bee the large buns that should buzz off. Doc von Schmeltwick (talk) 21:18, 26 January 2019 (EST)

This raises an important question: Does the English name refer to both bees or just the small ones? It comes from a Prima guide, and only one page is cited.

Then the small ones are generic, and shouldn't be split. I kinda feel the "Yoshi's Story" identifier is redudant, as there are 2 different types of bees in this game. --