Not to be confused with Club Nintendo Hanafuda. 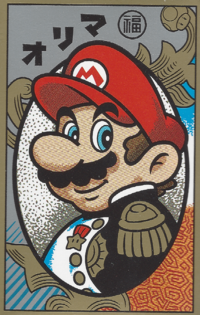 Illustration on the upper face of the inner box of the red Mario Hanafuda deck. His face replaces that of Napoleon Bonaparte's found on the "President" set.

The Mario Hanafuda deck is a deck of Japanese playing cards known as hanafuda. It was introduced during the 30th Anniversary of Super Mario Bros. The illustrations on the cards, including the ones on the inner box, are derived from the currently produced "President" set, which has been Nintendo's flagship brand of traditional hanafuda for over a century.[1] Red- and black-decked versions of Mario Hanafuda were later made available on the My Nintendo Store in Europe on June 16, 2020,[2] along with postcards based on them.[3]

In the Mario Hanafuda deck, all of the cards' traditional illustrations have been modified with elements from the Mario universe. Furthermore, a close inspection of the illustration reveals that a new printing method has been used with respect to the one used in the Club Nintendo Hanafuda. Another important aspect is that now the months follow a theme: