Book Bash is a boss minigame against Kamek in Mario Party DS. 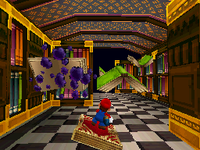 Mario flying down the hallway.

The minigame is played similar to Space Harrier, as the player must survive a flight down the hallway while taking out the henchman and avoid running into bookcases that randomly pop out to hit the player by using an ink pen that shoots ink.

After getting past the books, the player eventually arrives in Kamek's location. The player and the boss Kamek have a Health Meter. The player has 5 lives while Kamek has 3. The player must use their ink pen to shoot Kamek in the face until he gets inky and cannot see. He will shoot his magic in every direction causing a book to fly down and hurt himself. After that, the player has to avoid the book so they do not get hit as well. However, Kamek attacks by summoning books to attack the player and firing magical blasts from his wand. Kamek also has a few defensive moves as well. He can move left and right to avoid some ink blobs and he can wipe his face to get some of the ink off.

After three hits, a giant blue book falls on top of Kamek, knocking him out.